Cholera has killed millions of people, and without proper action, could continue to do so for many years. Many have modeled and analyzed cholera outbreaks globally to predict where they will next strike, or to forecast cholera cases and/or risk during one particular outbreak. Lambert iGEM has itself created a system of models, CALM, the Cholera Artificial Learning Model, to forecast exact cholera incidence, with the proof-of-concept forecasting cases in Yemen. Consisting of four XGBoost models working in conjunction, CALM is able to make predictions that are highly accurate and reliable, utilizing a broad range of predictive features, and robust machine learning techniques. In addition, by using a system of four models, CALM is not only able to provide a comprehensive 2 month report with 2-week intervals, but also ensures that none of its models “fall behind” by making a prediction too early or too late. Sudden spikes in the cholera prediction may not be modeled accurately by models of later time frames, but more immediate aspects of the model, such as the predictor for 0-2 weeks, can effectively account for sudden changes in the cholera cases. CALM has been shown, within the data used, to be a reliable, powerful way to reduce the number of people suffering from cholera by providing advance notice of outbreaks and allowing for the distribution of medical supplies to pre-empt an outbreak.

Lambert iGEM has also developed an SMS bot utilizing the Twilio API and the Flask web framework for gathering health and sanitation data from areas affected by a cholera outbreak. This bot, named CALMWatch, allows for a healthcare organization or government agency to distribute an SMS survey to a given population so that affected people can report data related to an ongoing cholera outbreak such as cleanliness of water sources, water storage, and waste management. This data can then be fed into the CALM model in real time to increase the accuracy of the model and increase the size of its databases. This bot is based on RatWatch, an open-source SMS-based rat reporting service for the Atlanta area developed by M. Koohang (Zegura & DiSalvo 2018), who graciously allowed Lambert iGEM to modify it for the purposes of the 2018 project. 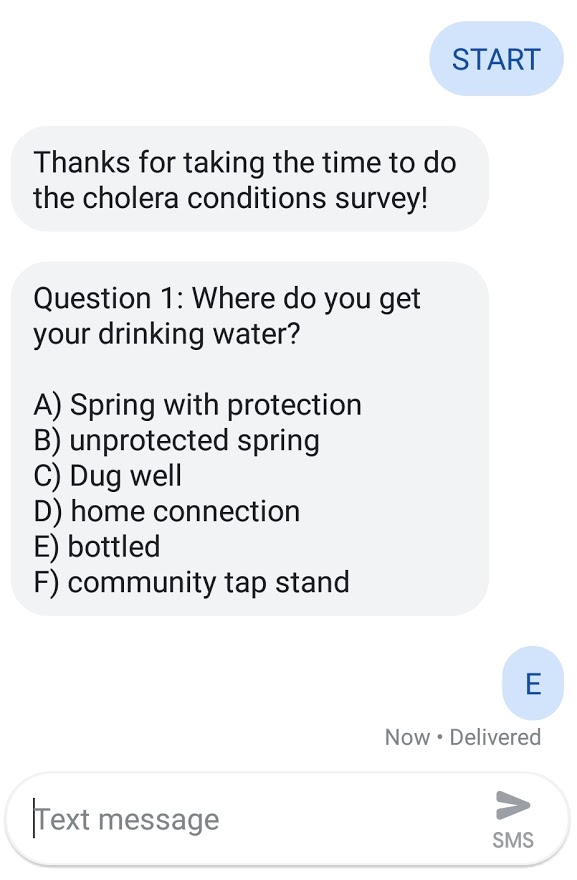 While the efficacy of the model has only been proven in Yemen, it is expected that with further development and adaptation CALM will be used to predict disease outbreaks around the world. As development on the project progresses, Lambert iGEM hopes to construct a fully autonomous web-based software platform comprising of data collection bots that collect data from major health and sanitation sources, scripts that are capable of syncing data from the ColorQ app and from CALMWatch surveys with CALM’s databases, and an online platform that coordinates global usage of the model so that users can share and distribute results and model improvements more easily. In terms of CALM itself, Lambert iGEM also hopes to engineer more features for the model by acquiring data for more environmental factors, possibly including algal blooms, migration data, and OCV (oral cholera vaccine) campaign data.