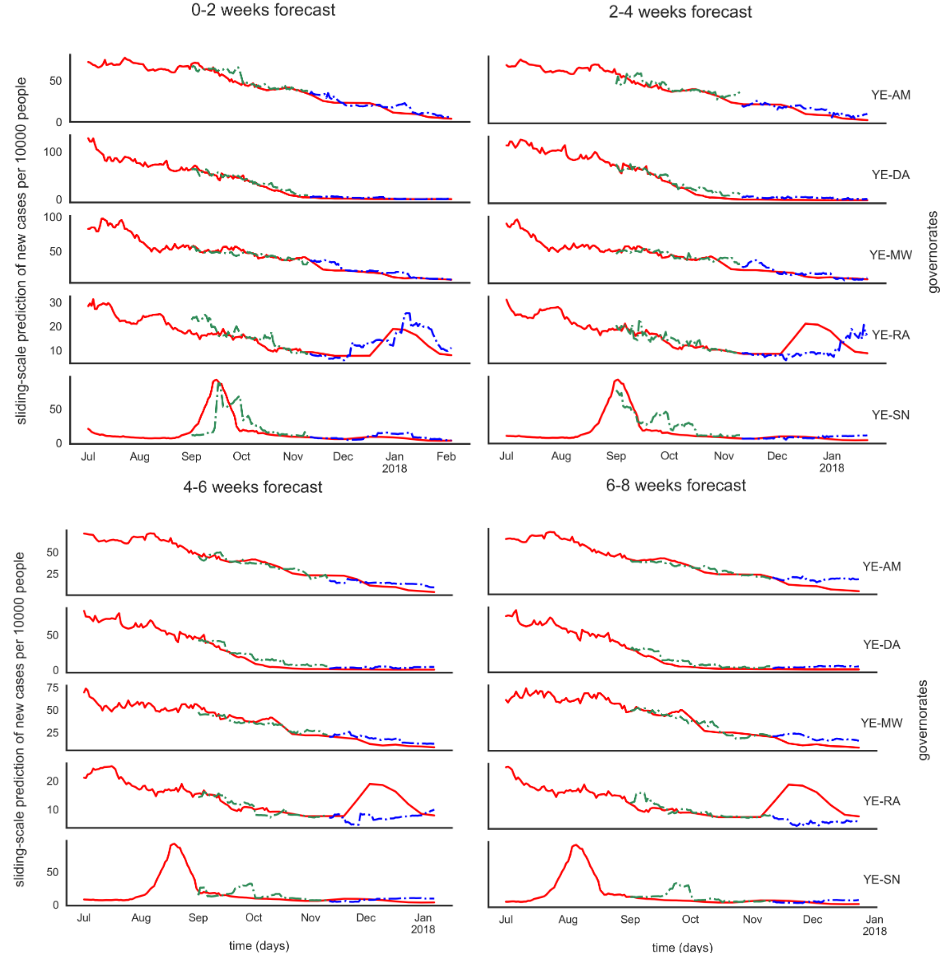 Our forecasts for each time frame vs a sliding window of real cases. The window represents a two-week interval corresponding to the forecast range with single data points, sliding over the data and summing up the cholera cases falling in the interval. For example, in the 0-2 week forecast plot, on September 15th we predicted there would be 92 new cholera cases per 10,000 people in the next two weeks in the governorate of YE-SN (Sana’a). Then, two weeks later, shown as the red true-value, Sana’a experienced ~92 cases. However, the date for the true-value datapoint remains September 15th, as the value describes the number of cases 0-2 weeks in the future. The red value refers to the true value, or the number of new cholera cases actually experienced by the respective governorate in the corresponding time range (2-4 weeks from present, 4-6 weeks from present, etc.). Cross-validation predictions (green) were completed with a rolling-window method, as described earlier (see methods), and the hold-out predictions (blue) were done separately, with the model training on all data previous to the holdout set.
Our four model system is able to accurately and comprehensively forecast cholera outbreaks across 21 governorates exhibiting heterogeneous behaviors. Five governorates were chosen to represent the entire range of behavior exhibited by all 21 of Yemen’s governorates. YE-AM (Amran), YE-DA (Dhale), and YE-MW (Al Mahwit) experienced the greatest cumulative number of cholera cases from May 22nd to February 18th, respectively, making them three of the four governorates most affected by cholera overall in the given timeframe. These three governorates exhibit behavior highly similar to the other governorates, albeit at a higher scale. Our accurate delineation of the outbreak across all four time frames in these three governorates shows the usefulness of our models in the general case. On the other hand, YE-SA and YE-RA present a rare and interesting case - a sudden outbreak. As our predictive range increases, it becomes more difficult to predict sudden spikes, due to either a lack of information many weeks prior or the events preceding a sharp outbreak not having occurred yet. As a result, longer range models seem to predict sharp outbreaks with a certain lag. This can be seen from the 4-6 week model’s forecasting of the YE-RA outbreak, which shows an upward trend, but not a full spike being predicted. However, this is where the combination of all four of our models becomes most useful. While long-range models cannot easily predict outbreaks, our shorter-range models are able to pick up the slack once the outbreak becomes closer. Specifically, our 0-2 week forecasting model is able to predict incidence spikes in YE-RA and YE-SA, so even if our long-range models were unable to predict the outbreak immediately, we would still detect the outbreak at a later date.

Other models look to forecast the total cholera cases Yemen may experience (Nishiura, 2017) with some models providing governorate-specific (or even geographically smaller) predictions (Cole, 2018). While the objective of our models is to predict new cases (as to not simply follow linear trends and be able to predict outbreak spikes), we are able to convert our predictions to total cases through simple reverse differencing. Using this method, we are able to accurately delineate the course of the Yemeni outbreak. Figure 1.2 illustrates this on a representative sample of five Yemeni governorates.