The Cardiff iGEM team of 2018 aims to create an effective pesticide against aphids.

Aphids are small insects that feed on the sap of plants by injecting their proboscis into plant vasculature. According to CANNA, there are over 4000 species of aphids, all of which are considered to be 'plant parasites'(1). Aphids can directly damage the plant by removing essential sugars and impeding plant growth, or indirectly as their excretion can support the growth of fungi. However, the most serious impact of aphids is their role as virus vectors, as each aphid species is host to a plethora of different viruses. These viruses cannot be easily targeted directly, due to their diversity, number, and rapid rate of evolution. Instead, attempts are made to control the aphid populations.

Traditionally, chemical pesticides are used against aphids, but the pesticides applied as sprays often leave unaffected areas due to shading by the leaves, and have to regularly be applied. Systemic pesticides can be used, which travel through the plant vascular tissue. However, as with many pesticides, aphids are becoming resistant, and new alternatives must be found(2).

So here we thought, how can genetic manipulation help?

We first looked into using protein pesticides to target the insects, but soon found that there are size restraints on proteins being used, as the transgene needs to be expressed in cells called companion cells, which supply the actual hollow tubes, called sieve tubes, where the aphids feed. These cells are joined by gaps in the cell walls, called plasmodesmata, which have passive flow of components from the companion cells into the sieve elements. However, these plasmodesmata are small with size restraints, often restricting what can pass through. 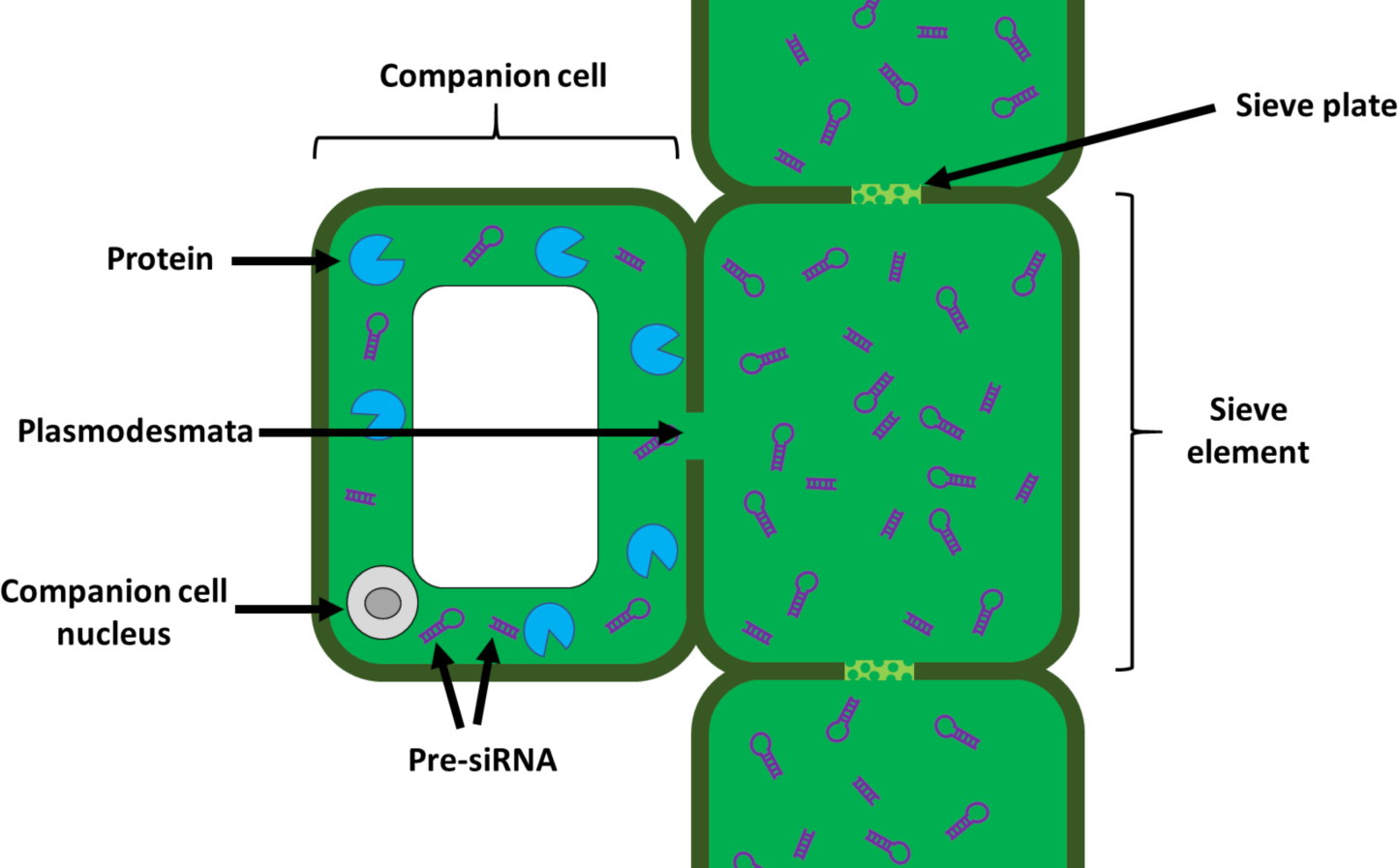 This meant that we had to find a smaller alternative, namely a nucleic acid. We knew that aphids carried an essential bacterial symbiont, Buchnera aphidicola, so we decided to try and target these bacteria. A quick bioinformatic search identified that these bacteria are part of the ~55% of bacteria that do not contain a CRISPR system, so we decided that expression of a single guide RNA (sgRNA) was out of the question. Instead, we decided to target some aphid genes that enable the survival of these bacteria. We found some key gene families, the BCR and SP gene families, that are unique to aphids and are likely essential for the production of bacteriocytes that are the specialised cells that allow the survival of the bacteria.

Therefore we decided to use an RNA interference (RNAi) strategy to reduce expression of these genes in the aphid Myzus persicae .

Firstly we aimed to transiently express RNAi constructs in Nicotiana benthamiana leaves and subsequently test the ability of these transgenes to alter the fecundity of aphids that have been fed on the transgenic plants over mulitple generations.

Figure 2: Aphids have bacteriocytes which harbour their symbiont, Bucnhera aphidicola. Aphids such as Myzus persicae (left) have an essential symbiotic relationship with bacteria called Buchnera aphidicola. These bacteria are essential for the survival of the aphid, and live within specialised aphid cells called bacteriocytes (centre). The bacteria can be seen inside of the bacteriocytes (right). The RNAi constructs will be produced in the tobacco plant, undergo processing and be taken up by the aphid. The siRNAs will then degrade the mRNAs that are essential for bacteriocyte development, preventing this symbiotic relationship.

And so, RNAphid was born...