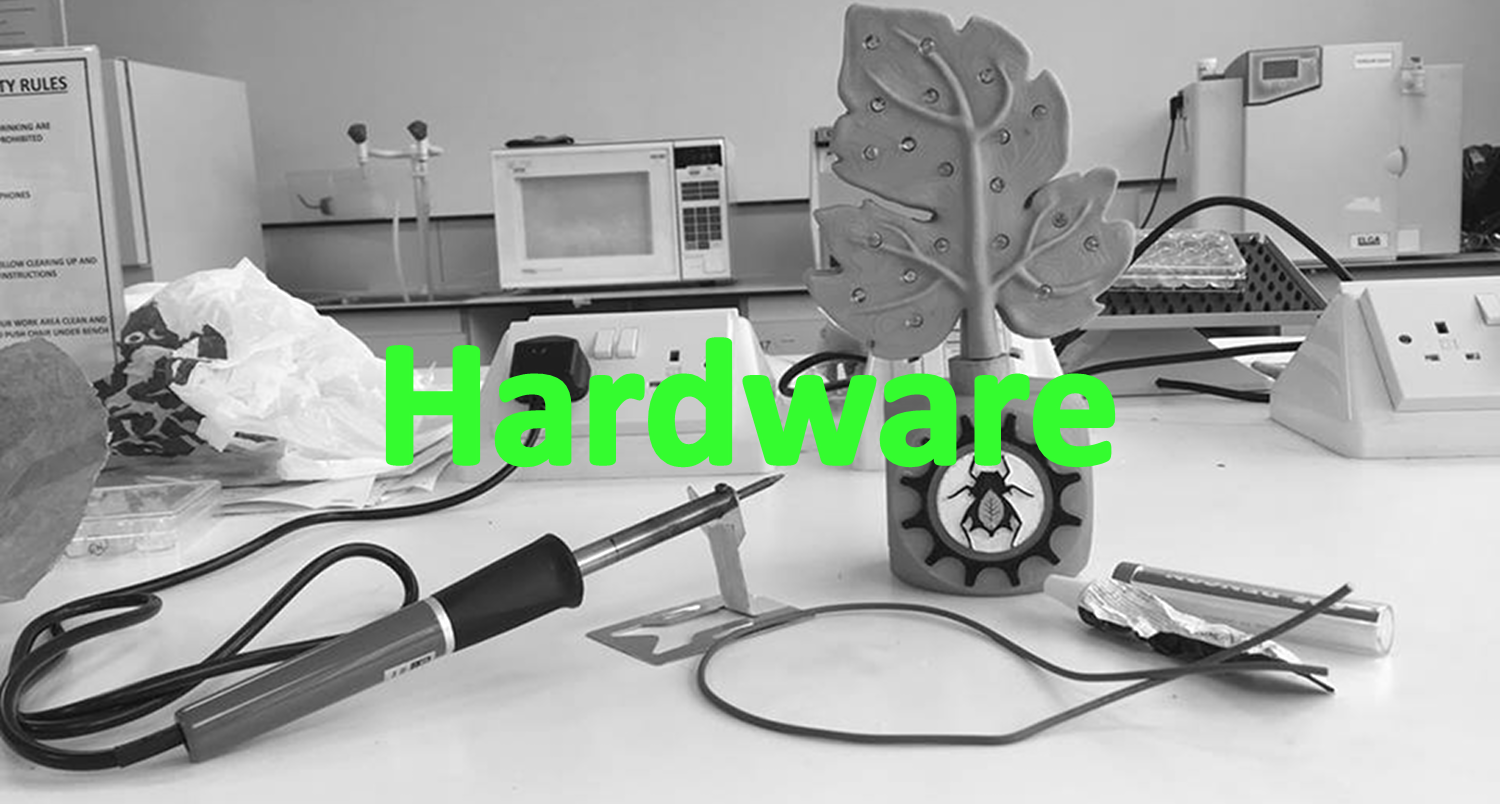 
Whilst hardware was not a main part of our project and we do not expect to win the best hardware prize, we feel it is important to note that useful hardware can be made by teams for non-scientific uses, such as for human practices. Here, we 3D printed a plant-shaped housing unit to hold an electrical circuit, controlling a set of LEDs that protrude through holes in the leaf. There are two switches in the 'plant pot', one that can be switched to turn on green LEDs, represented as the standard plant genome. However, when a button is pressed in by the addition of a 'transgene' (a plastic block that inserts into the back of the pot, pressing the button), switching on red and blue LEDs, representing the addition of our two added reporter genes, Gus and mCherry. This simple design was useful for public outreach events, to help demonstrate genetic modification and our project. It was especially useful to help the children understand in a basic way. This page shows the structure, design, and use of our hardware. We also created and gave feedback on WashU's hardware, as part of our collaborations.

First we discussed potential ideas with our secondary PI, Dr. Pass (seen below), about the potential production of an informative tool to use at our outreach events. The Cardiff iGEM team of 2016 made some very basic circuits, shaped like a jellyfish, that illustrated eGFP function. In our communication, we decided that we had the capability to produce a more advanced model utilising 3D printing. We decided on 3D printing a leaf which incorporates two separate circuits; one circuit is the 'genomic' circuit which is constitutively on, and has green LEDs, representing the natural state of the plant. The other circuit was the 'transgenic' circuit, which at the time was just the GUS transgene, activating blue LEDs. This later became a mix of blue for GUS and red for mCherry. 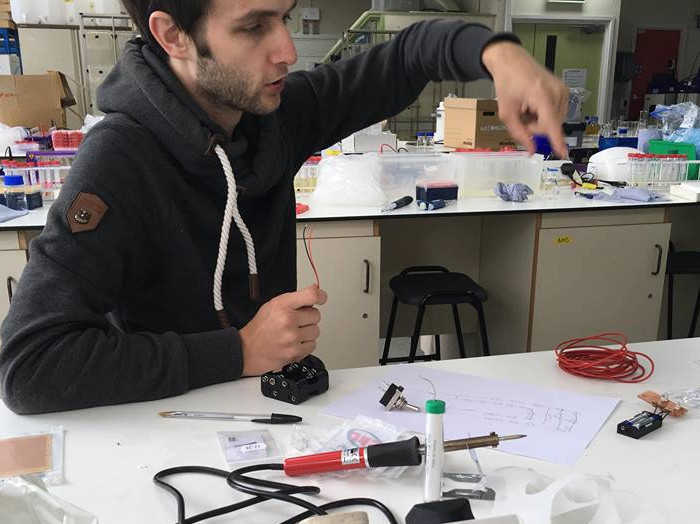 Following this, Dr. Pass created the .stl files that the 3D printer would use to produce the model's case, seen below. These files can be downloaded here. The 3D model was printed using a Zortrax m200 printer. The plastic was ABS plastic printed at 280 degrees Celsius, with an extruder block temperature of 50 degrees Celsius, chamber at 40 degrees Celsius, and build platform at 60 degrees Celsius. Here it should be noted that the base or 'flowerpot' of the model was slightly too small in this prototype, and should be scaled up slightly to better fit all the electricals into the base. There was also minimal post-print processing too, as the slot where the base of the leaf inserts into the pot needed to be slightly enlarged via sanding to fit easily and without force. 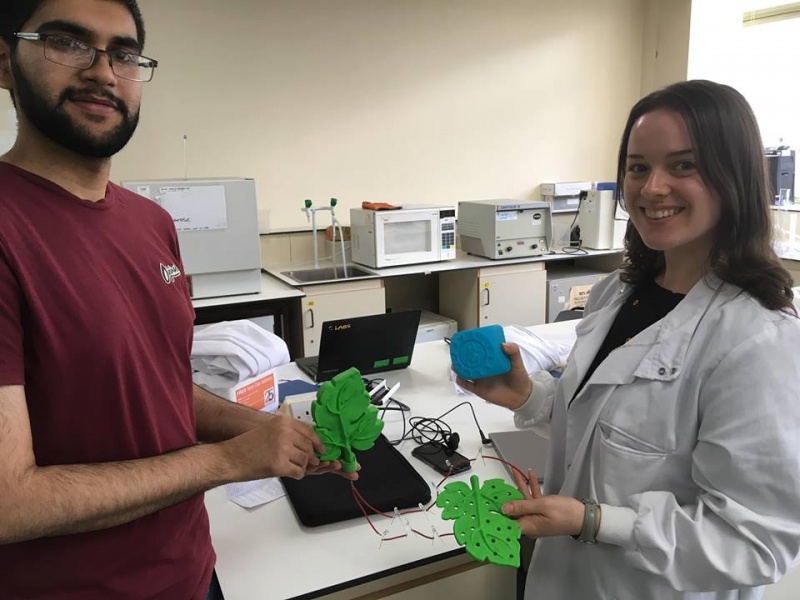 Following this, we had to map out the electrical circuits using the case as a guide. We decided to have an arrangement of LEDs so that the green LEDs were all over, and the red or blue LEDs on one of each of the halves, demonstrating the compartmentalisation and segregation of features within a leaf. After the blowing of several LEDs (it turns out one LED doesn't survive the current produced by 8 AA batteries, and sometimes, neither do 5), the completed circuits were tested in isolation of the case and deemed to work. The green 'genome' circuit was switched on with a simple switch, and the 'transgene' circuit was meant to be inserted into the back of the case, pressing a small button down, which activated the blue and red LEDs only when the 'transgene' piece of plastic was inserted. This is the block labelled 'GUS' in the .stl files, which has a longer stem to it than 'genome' block, allowing the button to be pressed. Due to the 'plant-pot' of the case being slightly too small, this had to be pressed manually, but could have been made to function perfectly by increasing the size of the 'plant-pot'. In addition, we painted our logo on the front of the plant case. These can be seen below.

Finally, we fixed the circuit within the case, and glued the components together. We then fitted all the parts into one and tested the model as a functional prototype. This can be seen below. 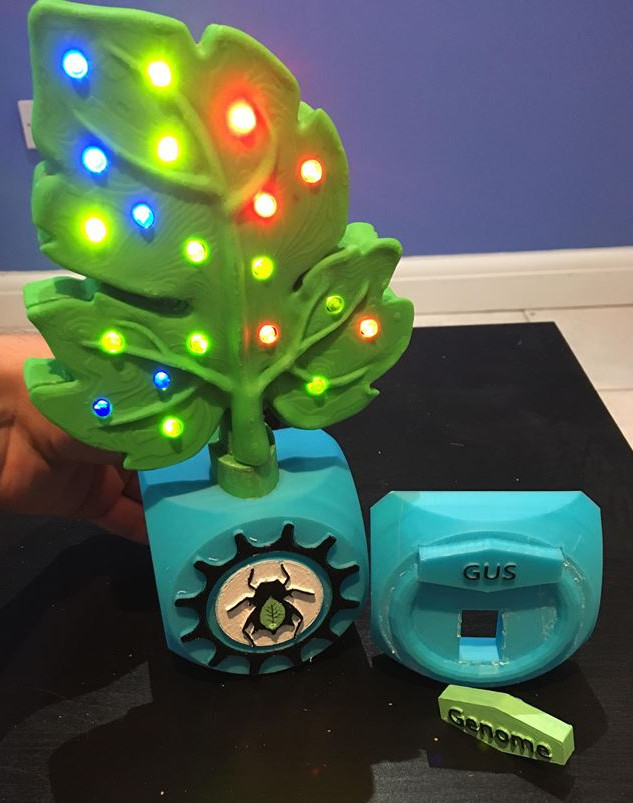 We took the demonstrative model to our outreach events where it was used to easily demonstrate the reporter gene part of our project, and the ease of genetic modification to those who were unsure. It was particularly useful when explaining to children such as for the event at Techniquest, a science day aimed at children. More about these outreach events can be found on our Public Engagement page.