Genetic modification is a highly controversial topic for consumers today. We formulated this survey in order to assess if our novel technique of combating aphids as crop pests which utilises GM would be accepted by the general public. By utilising the team’s individual and official iGEM team social media pages, we reached a cohort of 271 participants from varied backgrounds of science.

One of the most crucial questions of the survey ‘Do you have any concerns over the use of GM crops?’ had a positive response in that 68.7% of the cohort exhibited no concerns about GM Crops. This is shown in Figure 1. 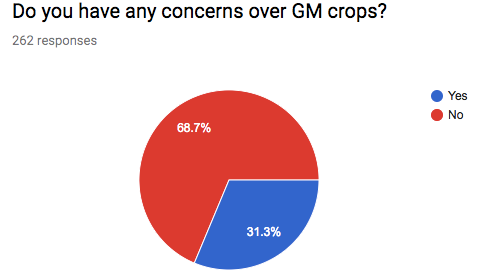 Figure 1. Results of GM and pesticide survey by RNAphid, on concerns over GM crops.

On analysis of this survey, we did not expect that the majority of respondents would have no concerns. Past surveys, such as that conducted by BBC’s Countryfile to viewers in 2010, saw 79% objecting to GM trials being allowed in the UK. The same year, a survey by Food Navigator saw 73% wanting a ban on all GM food in the UK(1). However, one survey, the results of which can be observed in Figure 2, showed a more positive view of GM having the potential to benefit agriculture, and other industries. Nevertheless, this still did not match the proportion we saw.

Figure 2. 2018 New Scientists survey conducted by Sapio Research, showing the percentage of people who have hopes that GM can benefit humanity in the form of medicines, agriculture, or through direct improvement. The survey was conducted on a group of 2026 adults in the UK (2).


Looking for an explanation as to why we received such a positive response to this question, we looked at the background of the participants. Firstly, we looked at age, which revealed that of those who responded with no concerns, 50.2% of the participants were in the under 18, or 18-24 age bracket. An article written by The Telegraph supports that this could be a cause, stating that two thirds of under-30s believe that the technology is a good thing for farming and support futuristic farming techniques, according to a survey(3). It also showed that only 20% of millennials expressed concerns about the benefits of gene editing or genetically modifying crops, despite decades of opposition and media warnings (3).

Our largest participation of age category came from the 18-24 section, as shown below in figure 3. 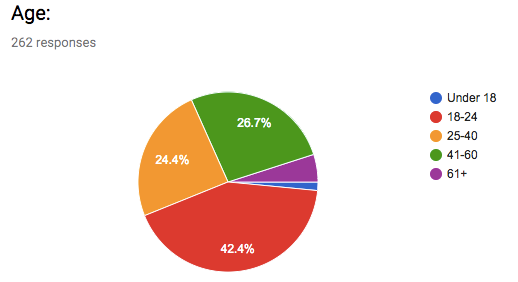 Figure 3. Response to Age I the RNAphid survey on Genetic modification and pesticide use.

When we ran statistical analysis (one-way ANOVA) on age groups relative to concerns over GM crops, we found a highly significant statistical difference (P=0.00554), suggesting that age is a major contributor to opinion of GM crops. This test was performed by converting ‘yes’ answers to 1, and ‘no’ answers to 0, and can be seen below.

Statistical test 1: ANOVA to test the difference of means between age groups when asked if they are concerned about GM crops.

When we analyse this further by comparing means between pairs of groups using a TukeyHSD test, we find that the biggest statistical difference lies between the second oldest and second youngest groups on our survey, and is the only significant difference (P=0.0164). However using this test, the difference between means is barely significant. 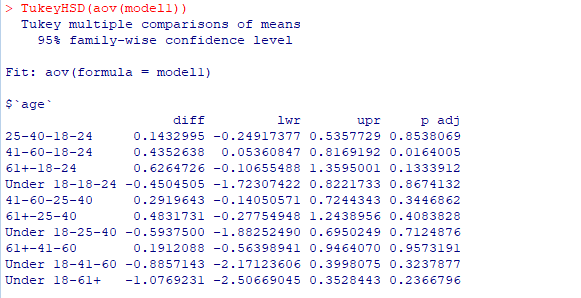 Statistical test 2: TukeyHSD test to show difference in means between any two age groups when asked if they are concerned about GM crops.


On a topic such as GM, generally, a lack of education can cause people to be daunted and therefore opposed to GMO use. Here, we would be looking at participants with just a high school level of science education. But in this cohort of the participants, we saw that 26.5% of those showing no concern over GM crops came from this cohort. 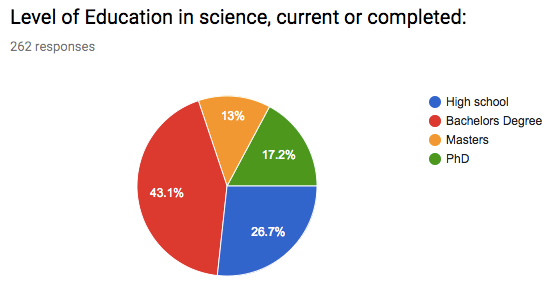 Figure 4. Pie chart to show level of education in science of survey participants.

However, when running statistical analysis (one-way ANOVA) to identify whether the level of education played a role in opinion on GM, we found that this was insignificant (P=0.985). This test was performed by converting ‘yes’ answers to 1, and ‘no’ answers to 0.

Statistical test 3: ANOVA to test the difference of means between groups with different scientific education when asked if they are concerned about GM crops.

To analyse this further, we ran a TukeyHSD test to compare means between every pair of groups. This too found no significant difference between any two groups.

We also looked to try and gain an understanding of the participants knowledge on current GM laws in the EU, GM food labelling and potential GM shopping habits. The results are shown in Figure 5. 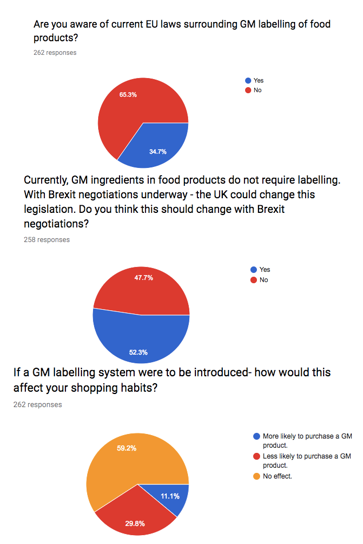 Figure 5. Response to survey on knowledge of current EU laws of GM, GM ingredient labelling in the UK and the potential effects on shopping habits if a new labelling system was implemented.

At the root of our project, we aim to eradicate the need for harsh chemical pesticides. We were keen to find out if the general public had concerns over their heavy usage in agriculture. These results are shown in Figure 6. 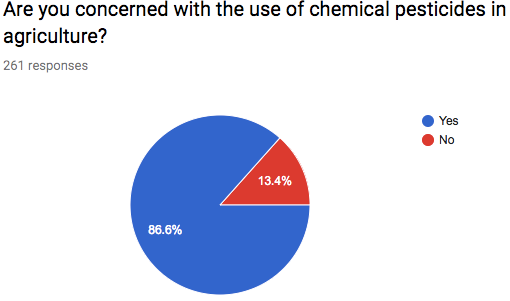 Figure 6. Pie chart to show the response of participants of the survey on pesticide use in agriculture.

Supporting the cause at the root of our novel strategy, we saw a clear majority of the participants, 86.6%, showing concern over the use of chemical pesticides in agriculture. Furthermore, we also saw great response to GM being a tool to replace or reduce pesticide use shown in Figure 7. 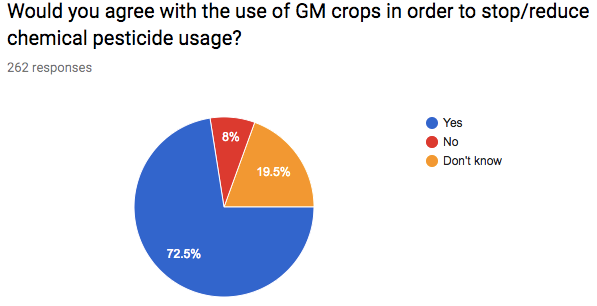 With only 8% protesting for the potential application of GMOs to act as an answer, this falls relatively inline with an overall positive response to GM, where 21.2% of those who agreed with the replacement or reduction/removal of chemical pesticides by GM application expressed concerns over their use in Figure 1. This shows that even those with concerns would agree that the use of GMOs is tolerable in order to reduce chemical pesticide use.


We decided to see if the country/continent of origin had a significant difference on people’s opinions about GM crops. Our One-way ANOVA found that this did not have a significant effect (P=0.734). This test was performed by converting ‘yes’ answers to 1, and ‘no’ answers to 0.

Statistical test 5: ANOVA to test the difference of means between location groups (continent or country) when asked if they are concerned about GM crops.

There was also no significant difference between means within group pairs as shown below. 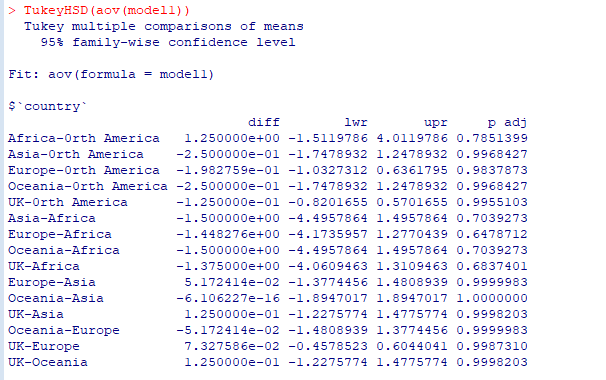 
Finally, we decided to see whether people would prefer to eat GM crops over crops that had chemical pesticides used. For this, there were 3 potential answers ‘yes’, ‘no’, and ‘don’t know’. These were converted to 2, 0, and 1 respectively.


Age had a significant effect in determining whether people would prefer to eat GM crops than eat chemical-insecticide treated crops. There was a highly significant difference between means (p=0.000595).

Statistical test 7: ANOVA to test the difference of means between age groups when asked if they would prefer to consume GM crops than chemically treated crops.

Again, we decided to analyse the differences between means of each pair of groups. We find the same pattern as the previous analysis between age and concerns about GM crops. However, this time there is a significant difference between the 41-60 age group and the 18-24 age group (p=0.00108). This suggests that the younger generations would prefer to eat GM crops than chemically treated crops, whereas the opposite is true of older generations. Interestingly, these means are not as different between the youngest and oldest group (under 18 and 61+), where the p-value is only 0.706, which is not significant. 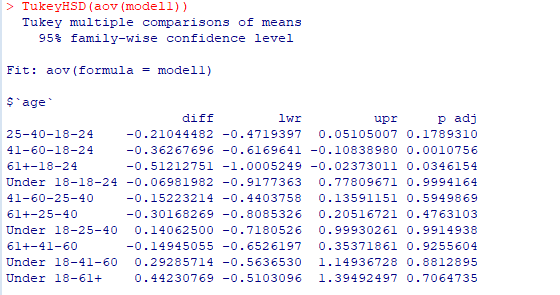 Statistical test 8: TukeyHSD test to show difference in means between any two age groups showing whether they would prefer to consume GM crops rather than chemically treated ones.


When we look at whether scientific education affects whether people would prefer to eat GM crops than chemically treated ones, we find a non-significant difference between groups (p=0.507). 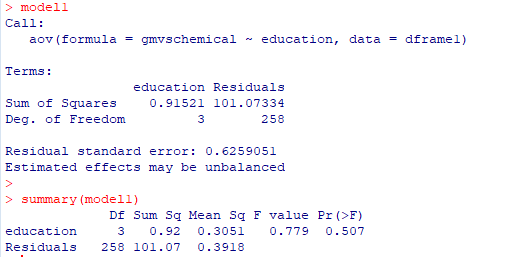 Statistical test 9: ANOVA to test the difference between means between groups with different levels of scientific education when asked if they would prefer to consume GM crops than chemically treated crops.

When we compare means between group pairs, we still find no significant differences.

Statistical test 10: TukeyHSD test to show difference in means between any two groups with different levels of scientific education showing whether they would prefer to consume GM crops rather than chemically treated ones.


Finally, when we look at different locations, we find that this too is insignificant (p=0.104). 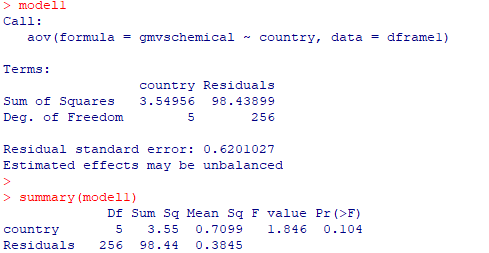 Statistical test 11: ANOVA to test the difference of means between location groups when asked if they would prefer to consume GM crops than chemically treated ones.

The difference between group pairs is also insignificant between all groups. 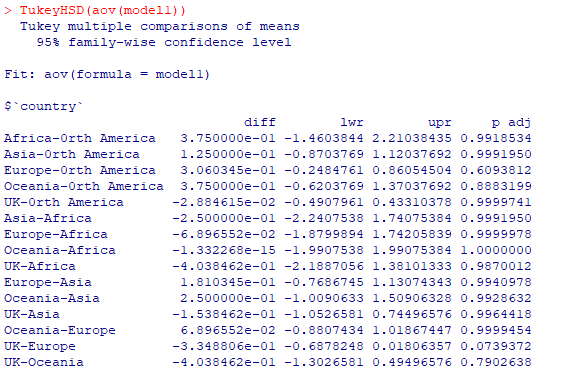 Statistical test 12: TukeyHSD test to show difference in means between any two location groups showing whether they would prefer to consume GM crops rather than chemically treated ones.


Our statistical analysis suggests that only age plays a statistically significant impact on peoples’ opinions and concerns about GM crops, and also in influencing whether they would prefer to eat GM crops over chemically treated ones. Younger generations seem to prefer GM crops over chemically treated crops, whereas the opposite is true for older generations. We suspect that this trend is due to the changing education systems and syllabuses that are taught in schools. It is important to note two limitations in these analyses. Firstly, some of the groups have low sample sizes which skews the data and can make it unreliable. This can be improved for more accurate statistical analysis by increasing the sample sizes for each group, and in the study as a whole. Secondly, our method of changing yes answers to high values (1 or 2) and no answers to low values (0), with unsure answers to medium/neutral values (1, where yes is 2), may be sub-optimal, and generate issues when running each statistical test. Thus, to improve our analysis, we would create graded numbers for our surveys, instead of yes/no answers, there would be questions such as “On a scale of 1-10, how concerned are you about consumption of GM crops, with 1 being not concerned and 10 being highly concerned”. This would create less ambiguous data, with a greater range for more accurate analyses.