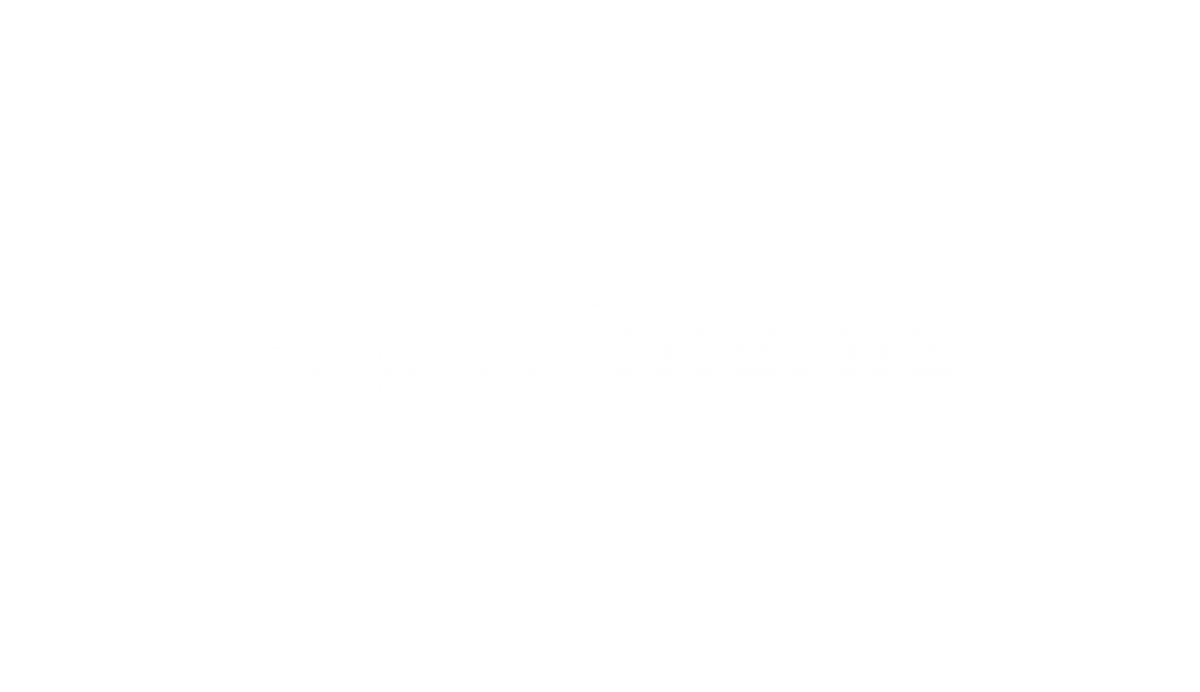 During the development of Printeria, experimentation has been one of the fundamental aspects in each step of our project. The design of new experiments and protocols has allowed us to validate the results obtained from the device or the laboratory with the theoretical schemes and to guarantee the repeatability of each experience. These experiments were intended to cover three key objectives of the project:

Check the results of our experiments yourself...

In regard to the lab work, several lines of experiments have been carried out with the objective of ensuring the biological functioning of Printeria. We have kept a record of our daily lab work through different notebooks, so you can access the documents for each group of experiments by clicking their respective buttons.

You can also read the collection of protocols we have followed to proceed with our experiments, so they could be easily repeated by future iGEM teams.

Printeria needs a toolkit of DNA basic parts adapted to be assembled with the Golden Gate assembly method. We have designed them as they appear on our Design page. You can check the chronological construction phases of these parts going to:

We have done several experiments to select the way to introduce the Level 1 destination plasmid, in order to obtain the lowest number of bacteria without the desired insert resulting from the Golden Gate assembly reaction, and thus trying to avoid the necessity of the plate screening step. The progressive process of decision has been recorded in our:

In order to characterize our DNA basic parts, we had to assemble composite parts using the Golden Gate technology (Level 1 assembly) with our DNA basic part collection. By this way we were able to check the robustness of the protocol and to verify that its efficiency was high enough to be done by Printeria.

As it is explained in the Part Collection page , we have designed the BBa_K2656200 vector, adapted from the standard pSB1C3 backbone, to convert our Golden Gate transcriptional units to BioBricks. Thus, we were able to introduce each transcriptional unit into a BioBrick compatible vector with a Type IIS enzyme reaction. This process can be checked going to:

In the Printeria project, the experiments carried out on the machine developed by the Printeria Hardware team stand out in importance. With them, we have tried to verify the automation process that our device offers to the user. Below are described both the materials and the procedures of the most important experiments our Printeria equipment.

In this experiment we wanted to test the feasibility of the concept of breaking the seal we put in pipette tips and blowing through the synge to get the contents out.

For the first experiment of droplet movement the objective was to determine the important parameters that affect this technology.

For the second iteration of droplet movement test the objective was to add automation to the movement:

Extending onto the previous experiment we designed a PCB that would serve as the surface from printeria. This time we used 6 concatenated IC.

The objective of this experiment is to test the concept of a hot and cold zone to replace a thermocycler.

On this experiment the objective was to test the electroporator module for Printeria.

To test the electroporation module, we transformed 10G electrocompetent cells with 1 to 2 μL of the BBa_K26560105 transcriptional unit previously assembled into an alpha GoldenBraid vector (KmR). Thus, this plasmid express the sfGFP protein and so express fluorescence under UV light.

This year, Valencia UPV iGEM team has designed an extensive Part Collection in purpose of allowing the user to design multiple genetic constructions and experiments. One of our main objectives has been to show the user clear and structured information about the pieces that make up the Printeria kit. For this reason, we have considered the characterization of the parts as a priority when developing the project. In this way, we have elaborated an experimental protocol which have allowed us to systematically obtain and structure information from the parts.

The Printeria Modeling and Lab team and have jointly designed an experimentation protocol for the laboratory experiments. Thanks to it, and from the colonies of the different TU the experimental data can be obtained, processed and ready to be optimized.

We have designed two experiments following the same experimental protocol. In them we have assembled different Printeria TU with the same promoters, CDS (sfGFP reporter protein) and transcriptional terminator, but with different RBS. These experiments were used in our modeling to complete the characterization of the part in the Printeria Collection.

We have designed an experiment following the experimental protocol. In them we have assembled different Printeria TU with the same RBS, CDS (GFP reporter protein) and transcriptional terminator, and with different promoters. After obtaining the results, and following the optimization protocol, we have obtained the parameters of the model and have validated our model.

Experiment to compare reporter proteins with and without LVA tag

In this experiment, that we have performed following the experimental protocol, we have designed two TU. Both have the same promoters, RBS and transcriptional terminators, but different CDS. The CDS express the reporter protein YFP, however, one of them has a degradation LVA tag, which causes faster degradation.

The comparison experiment aims to compare the protein expression of two genetic constructs obtained by the Golden Gate and BioBricks assembly methods. The BBa_K2656117 TU has been designed for this purpose, whose parts are identical to those constituting the BioBricks BBa_J364001 construction. Both parts have been introduced in the same vector, and this one has been introduced in turn in the same strain E. Coli 10G. Finally, the fluorescence and absorbance of both constructions have been measured, following the usual experimental protocol, and the following results have been obtained.

The reporter proteins are one of the essential elements in the experimentation process of the Valencia UPV iGEM team. Thanks to them, we can quantify the protein expression of our modified bacteria, and relate it to the theoretical models designed. Proteins such as GFP, YFP, sfGFP, mRFP... are the proteins that provide us with information about the Printeria product, and that we want to show our user.

For this reason, the Printeria Modeling team and Web Lab have jointly elaborated a series of experimental procedures to obtain new information from the reporter proteins and use it in the treatment of experimental data.

Obtaining excitation and emission spectra is a fundamental aspect in the process of a fluorescent protein characterization. Each protein has a characteristic spectrum, which indicates the emitted energy of the fluorescent molecule when it is excited at a certain wavelength. 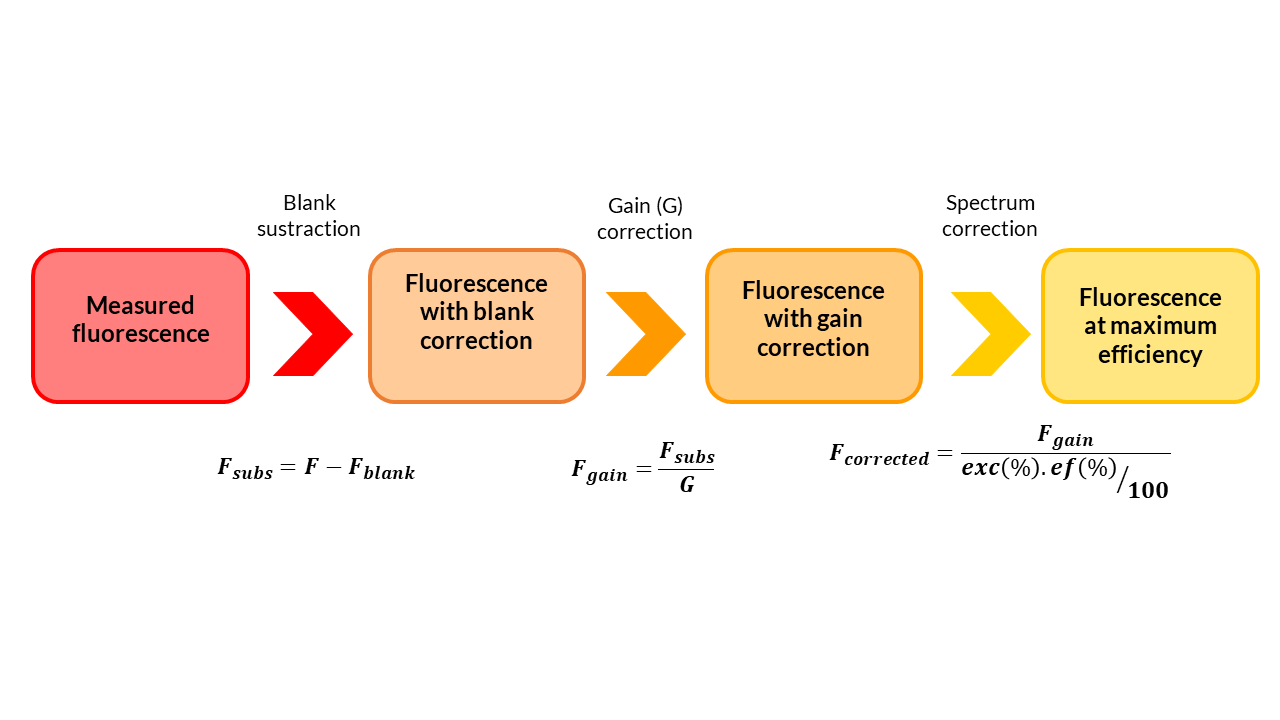 Until now, the corrections applied to the experiments were the subtraction of the fluorescence of the medium, and the division by the gain factor of the equipment. However, the measured protein spectra can be normalized with respect to the values that would have been obtained at the maximum excitation and emission wavelength.

Owing to this reason, a protocol has been established by the Lab and Modeling team to obtain a more accurate spectrum of any reporter protein.

In practical terms, the protocol has been applied to all of our reporter proteins: GFP, sfGFP, YFP and mRFP. All results can be found in our parts collection as well as in the iGEM catalog.

In the particular case of the reporter chromoprotein, such as amilCP, we do not measure fluorescence, but absorbance. In this case, in order to obtain the corrected absorbance curve, we must subtract the absorbance of a medium with cells without chromoprotein from the cell absorbance data with the reporter protein. Once the data have been corrected, we normalized them in a range of 0 and 100. The figure below shows the blue cromoprotein spectra. The protocol used can be found in the MATLAB script amilCP_spectrum.m.

Finally, we have also obtained the spectra of the fluorescein molecule. These spectra have been used to correct the fluorescence data used in the Interlab Study to obtain the Relative Fluorescence Units (RFU) to Molecules of Equivalent Fluorochrome (MEFL) conversion factor. In addition, the comparison between GFP and sfGFP proteins RFU has been possible thanks to fluorescein spectra.

Units of fluorescence data are one of the main problems during processing the results of experiments in SynBio projects. Unlike absorbance, where there is a simple conversion between Optical Density (OD) and cell number, there is no direct relationship between the Relative Units of Fluorescence (RFU) and the number of protein molecules in the cell. Moreover, RFUs vary among reporter fluoroproteins: for example, an RFU of the GFP protein does not have to be equivalent to an RFU of the mRFP protein, sfGFP, etc.

Thanks to initiatives such as the Interlab Study, we have been able to go a step further and obtain a MEFL/cellGFP factor for the equivalence between the RFU of the GFP protein and the Molecules of Equivalent Fluorochrome (MEFL). This relationship is an important breakthrough, as it can give us a more accurate estimation of the amount of GFP molecules in the cell.

However, another reporter protein have been widely used in Printeria experiments, such as the sfGFP or YFP. In the case of sfGFP, these protein has a much faster folding than GFP, which translates into a higher fluorescence intensity per molecule. And that's really interesting in the field of experimentation. In the case of YFP, the Wet lab Printeria team has realized that very little is known about this reporter protein, so it has been proposed in this project to get as much information as possible about YFP and its variants (check Printeria Improve). But in both cases, the equivalence factor between fluorescence and equivalent molecules is unknown.

Therefore, in order to obtain the MEFL/cellsfGFP and MEFL/cellYFP factors, the Printeria Modeling and Lab teams have designed a comparative experiment between GFP and both reporter proteins. The experiment consists of designing two identical transcriptional units (TU), changing only the CDS sequence so that each TU will produce GFP and our protein reporter (sfGFP or YFP), respectively. It should be added that this experiment is based on two fundamental assumptions:

Taking these axioms into account, the materials and procedure followed to calculate the MEFL/cell factors were as follows.

Comparison between fluorescence intensity of GFP and sfGFP reporter proteins

Comparison between fluorescence intensity of GFP and YFP reporter proteins

With MEFL/cell factors, FOD data obtained in any experiment in which GFP, sfGFP or YFP are used as reporter proteins can be transformed into equivalent fluorescein molecules by applying the following ratio:

The new data give us more accurate estimation of the number of molecules in the cell. Consequently, by relating the experimental results with the theoretical mathematical models in the optimization process, the parameters of the model acquire values more consistent with their physical meaning. Also, we can work with equivalent molecules instead of using arbitrary units.