To find fluorescence per cell values, typically the measured fluorescence is divided by the OD600 as an approximation of a cell number. This can also be imprecise and variable when measured on different devices.

The aim of the Fifth InterLab study is to make fluorescence per cell measurements more compatible among various laboratories around the world by investigating the fluorescence of eight test devices built from BioBrick parts. By standardising the protocol for the plate reader calibration with LUDOX solution, silica beads, and fluorescein, we hope to reduce variability between our results and those of other iGEM teams. OD600 values will be associated with colony forming units (CFUs) to achieve a more accurate measurement of fluorescence per cell.

All InterLab protocols were provided by iGEM

LUDOX CL-X was used as a single reference point for the plate reader calibration. Using the correction factor obtained from the data, absorbance (Abs600) values from the plate reader were converted into a comparable OD600 measurement and so the variability between path lengths was avoided.

400 μl of the LUDOX solution was added into four separate wells (100 μl each) in the 96-well plate. The same was done with 400 μl of the ddH2O. OD600 measurements were taken and the correction factor of 3.190 was obtained, see the table with results below: 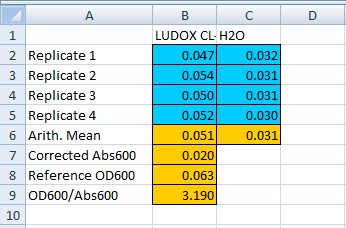 Silica beads - Microsphere suspension was used to construct a standard curve of a particle concentration that was instrumental in estimating the amount of particles/cells from the OD600 measurement.

To prepare a Silica beads stock solution, microsphere suspension was vigorously vortexed for 30 seconds and 96 μl was quickly transferred into 1.5 ml eppendorf tube and diluted up to 1 ml with ddH2O. A set of ten 2-fold serial dilutions in ddH2O was performed.

The OD600 measurements were taken, see the table with results below: 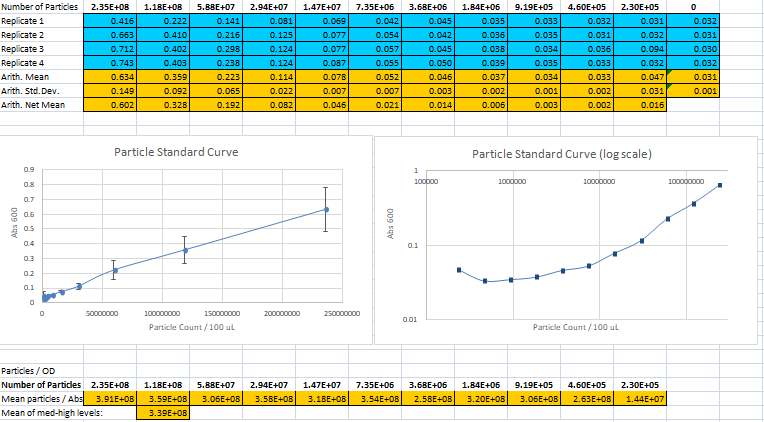 The units of fluorescence detected depend on the apparatus used and so to compare results from different teams, a standard curve should be made. To do that, all teams used the same fluorescein molecule to take measurements and construct a curve.

The fluorescence was measured, see the results below: 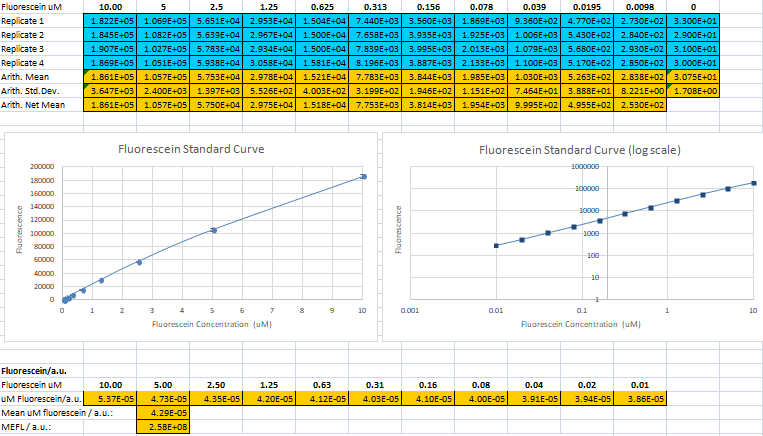 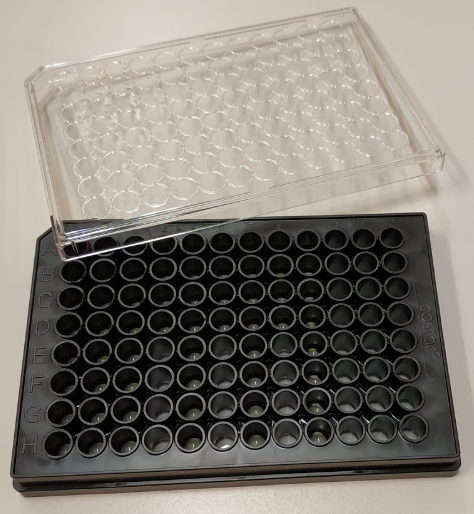 All OD600 measurements were taken using the same settings:

All fluorescence measurements were taken using the same settings:

To transform cells with different devices, 25 μl of E.coli DH5 α competent cells were mixed with 1 μl of DNA which has been resuspended with 10 μl ddH2O from DNA distribution kit plates. Cells were kept on ice for 30 min, heat shocked at 42°C for 45 s followed by 5 min incubation on ice. Later, 450 μl of LB medium was added and cells were incubated for 60 min at 37°C with shaking. 100 μl of transformed cells were plated on LB Agar plates containing 34 μg/ml of chloramphenicol (Cam).

The next day, two colonies from each plate were inoculated into 10 ml LB+Cam and grown for 18 hours at 37°C and 220 rpm.

10-fold dilutions were made with each of the overnight cultures with LB+Cam, and Abs600 was measured with a spectrophotometer (Eppendorf BioSpectrometer basic). Colonies were diluted with LB+Cam to target Abs600 of 0.02 in a final volume of 12 ml. A 500 μl sample from each diluted culture was taken prior to incubation and put on ice. Remaining cultures were incubated for 6 h at 37°C with shaking. After 6h of incubation, 500 μl samples from each tube were taken for analysis.

100 μl of each sample in four technical replicates were pipetted into separate wells of a 96-well plate. OD600 and fluorescence measurements were taken. 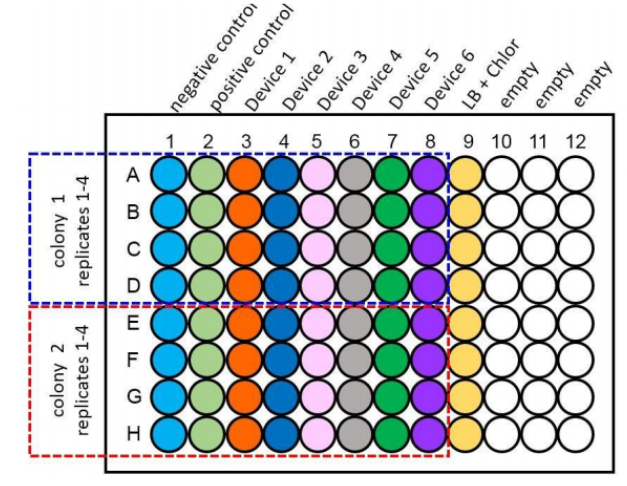 25 μl of the overnight culture of colonies picked from plates 1 and 2 were each separately mixed with 175 μl of LB+Cam in a 96-well plate and OD600 was measured (Table 1.).

Table 1. 8-fold dilutions of overnight cultures were done and the OD600 measurements were performed (200 μl of each dilution) with a plate reader. Plate 1 - negative control; plate 2 - positive control. 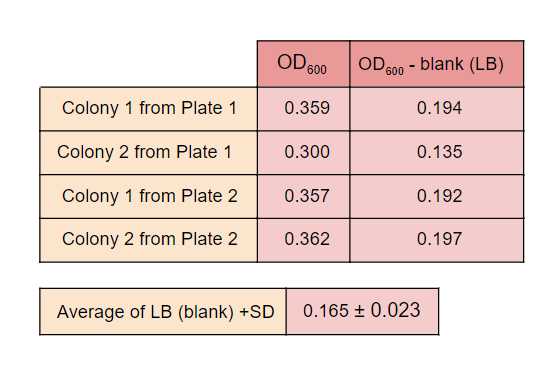 Table 2. OD600 measurements of each overnight culture dilution (each in 3 technical triplicates) to target OD600 = 0.1. 200 μl of each dilution was measured on a plate reader.

The next day, colonies were counted in each plate and the following results were obtained (Table 3.).

Table 3. The number of colonies counted in each plate with the dilution factor of 8×105 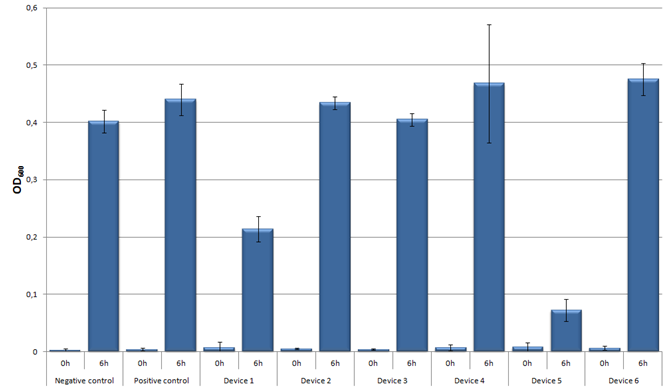 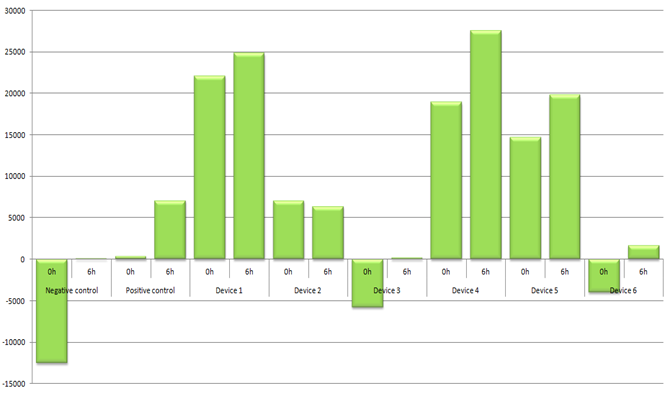 Overall, most of our results of the InterLab study are as expected. Cultures grew over the 6h period reaching the OD600 values of 0.214 - 0.475 with an exception of the Device 5 which grew very little (OD600 = 0.072) (Fig. 2). This might be because cells died after some time of incubation. Having more time, we could measure the cell growth over time and find the time point where the OD600 values level off. Also, parallel to this we could transform some E.coli DH5 α cells with a plasmid containing only Cam resistance to see if the expression of GFP is fatal/toxic to cells. Another reason could be that the DNA plasmid of Device 5 was poor quality or had a mutation making cells less resistant to Cam. As a result, cells did not survive in LB media with antibiotic. 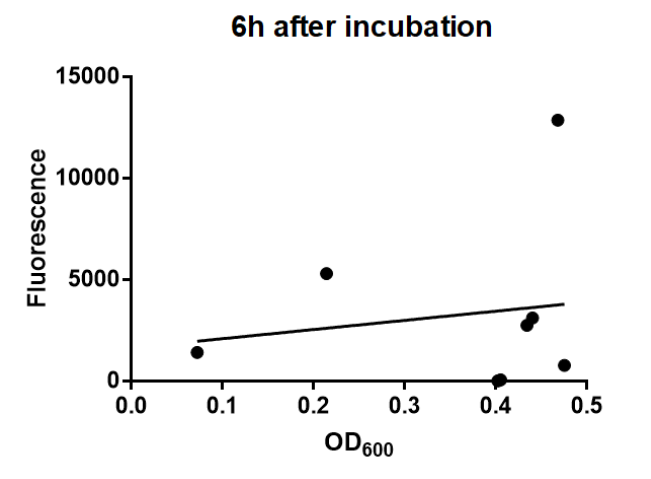 Figure 4. Regression analysis results with an average fluorescence and OD600 data from all samples/replicates after 6h of incubation (P=0.7184, R2=0.02327). Results show that fluorescence does not correlate with OD600.