Our team used two events to communicate with the public. The first was running a stall at The Manchester Museum Community Festival, with a colouring activity for children to open the topic of ‘good’ vs ‘bad’ bacteria. Through this event, we were able to engage with parents and other adults about the topic of synthetic biology being used to create safer food products. We discussed whether our synthetic biology project would be an appropriate solution for combating Listeria contamination. We additionally ran a stall at the science fair held by the University of Manchester for British Science Week where we discussed synthetic biology with school-children and used a base pairing game to explain how transcription and translation occur naturally, and how problems with this process can lead to disease. Through these activities, we raised awareness of the potential of synthetic biology and of the issues associated with its use. 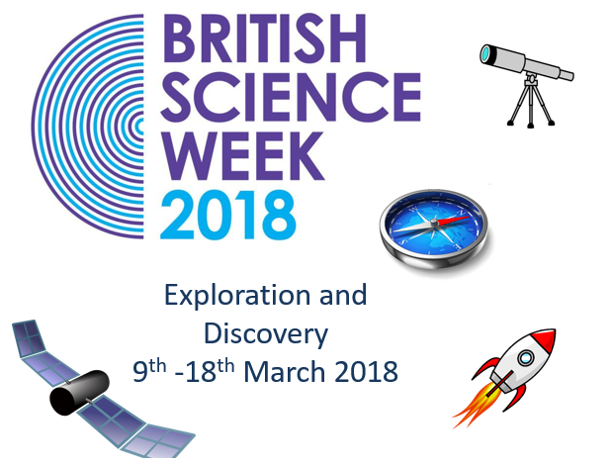 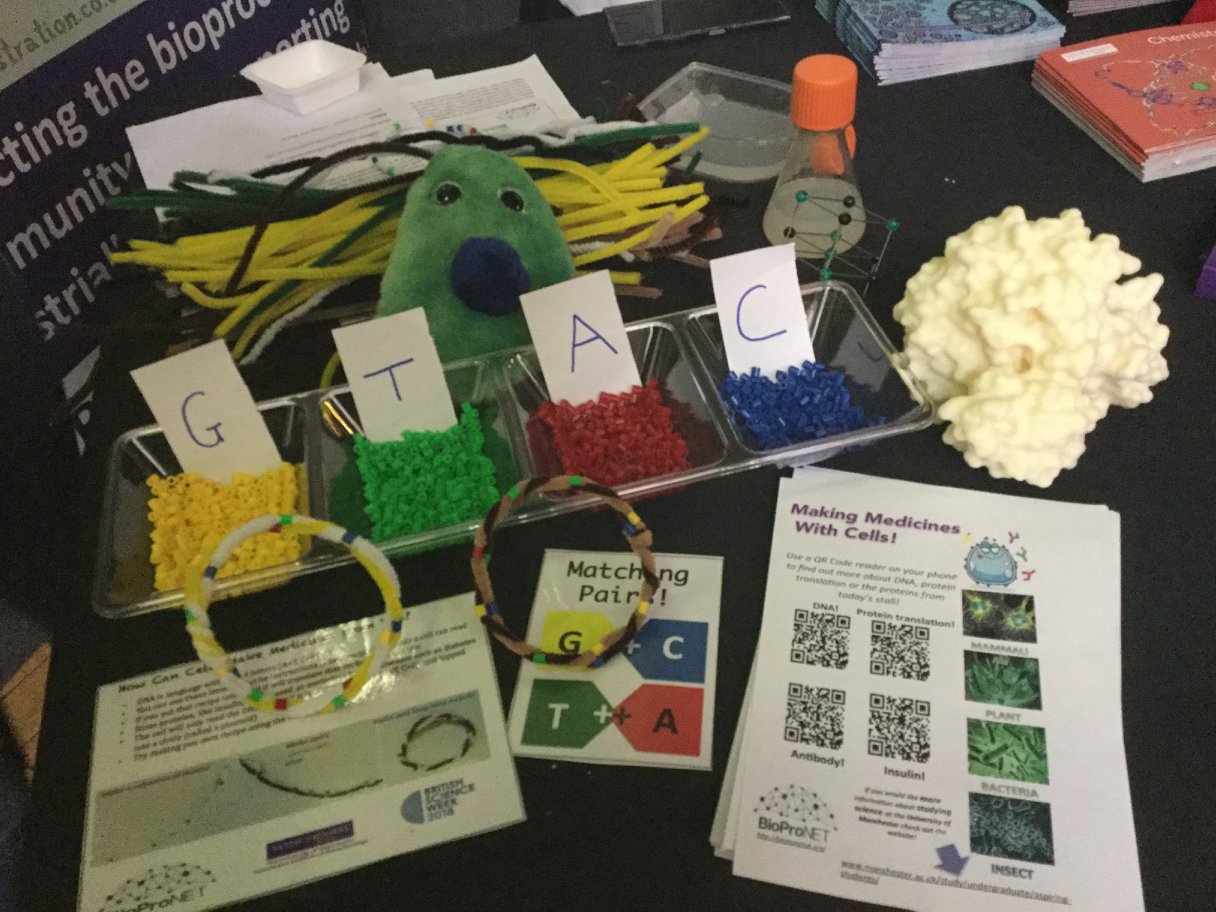 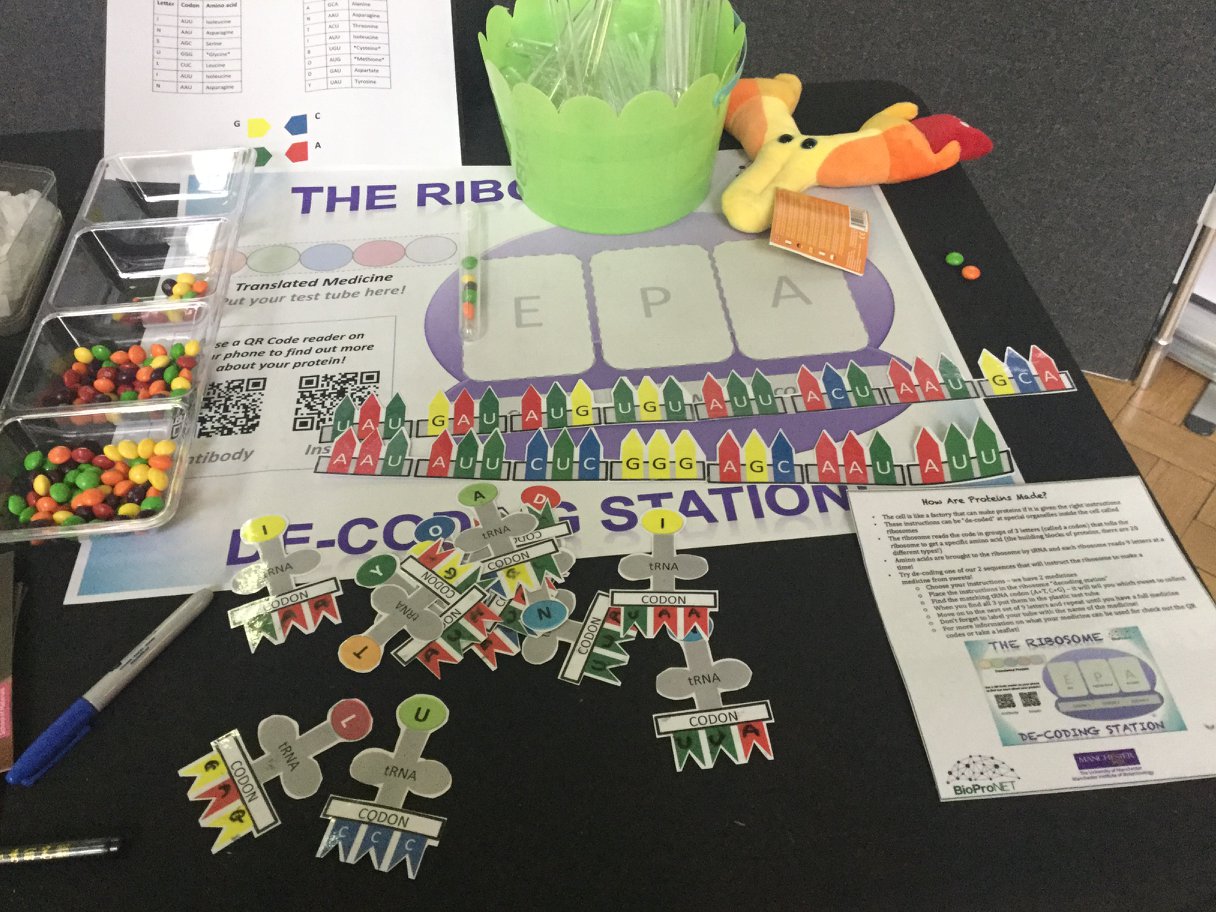 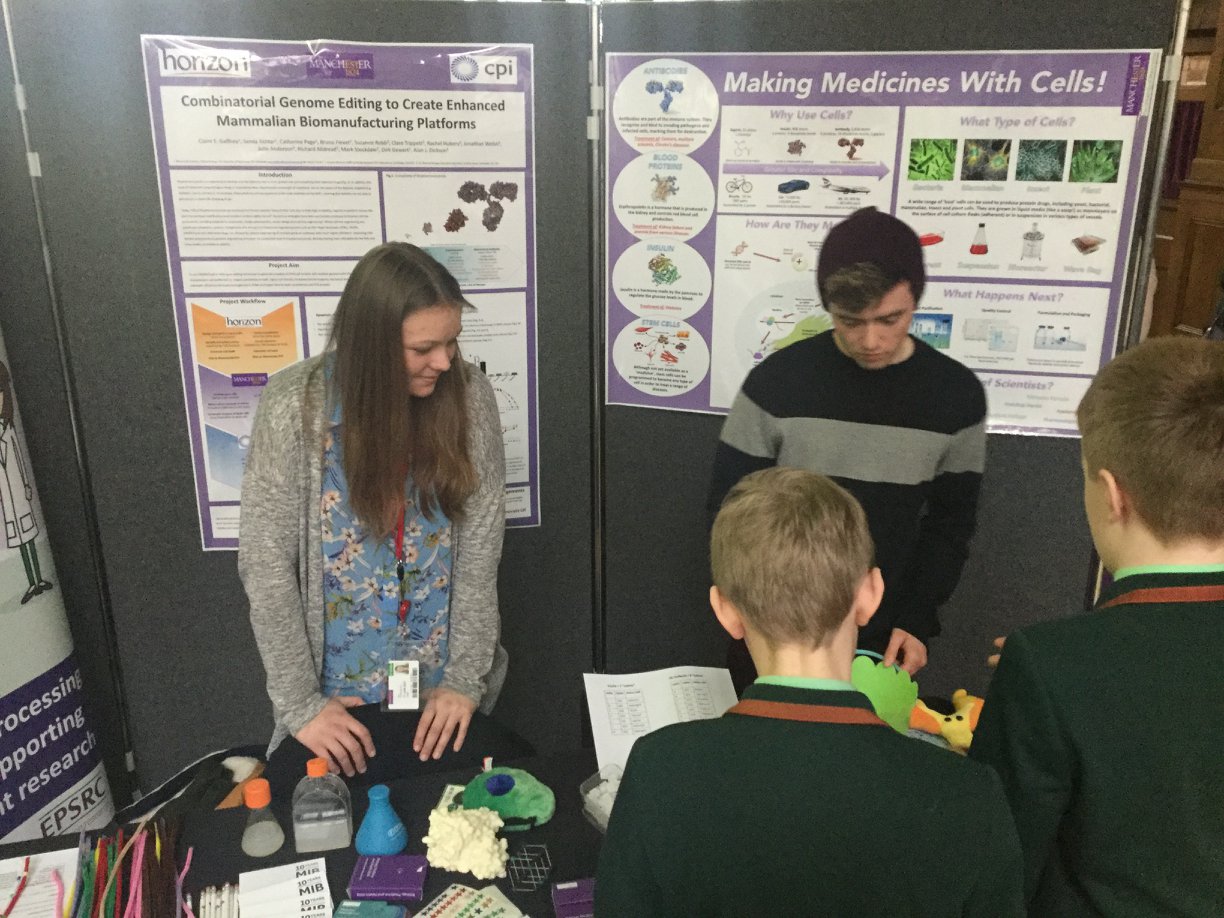 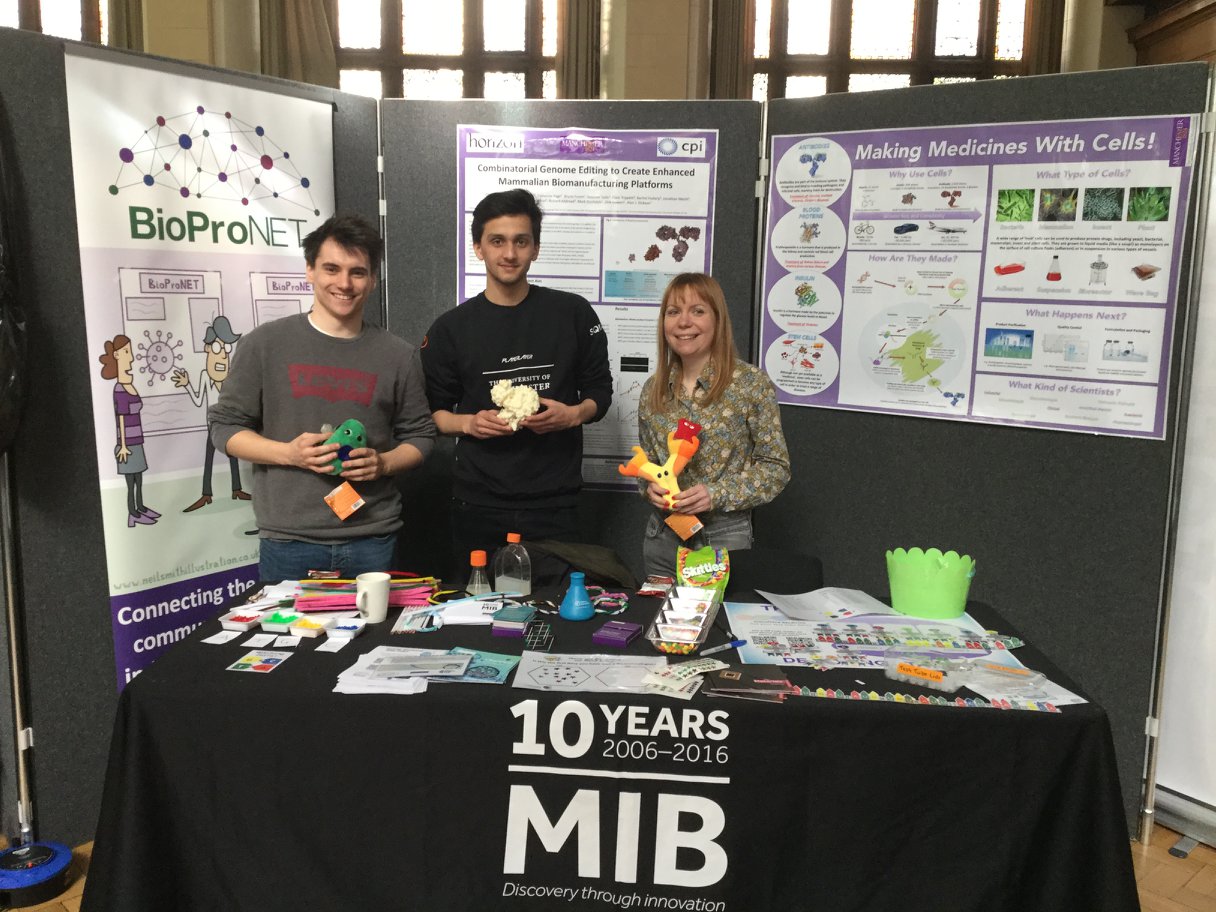 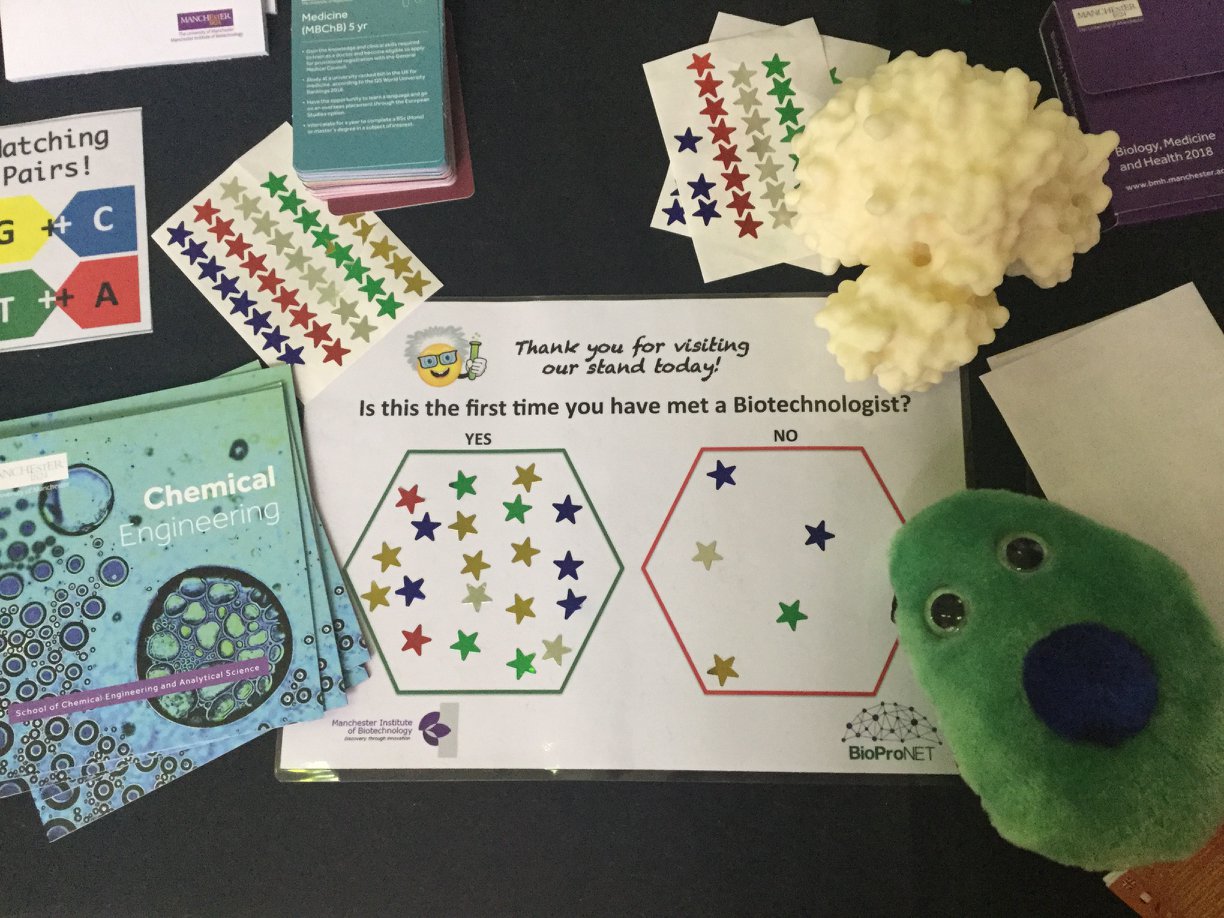 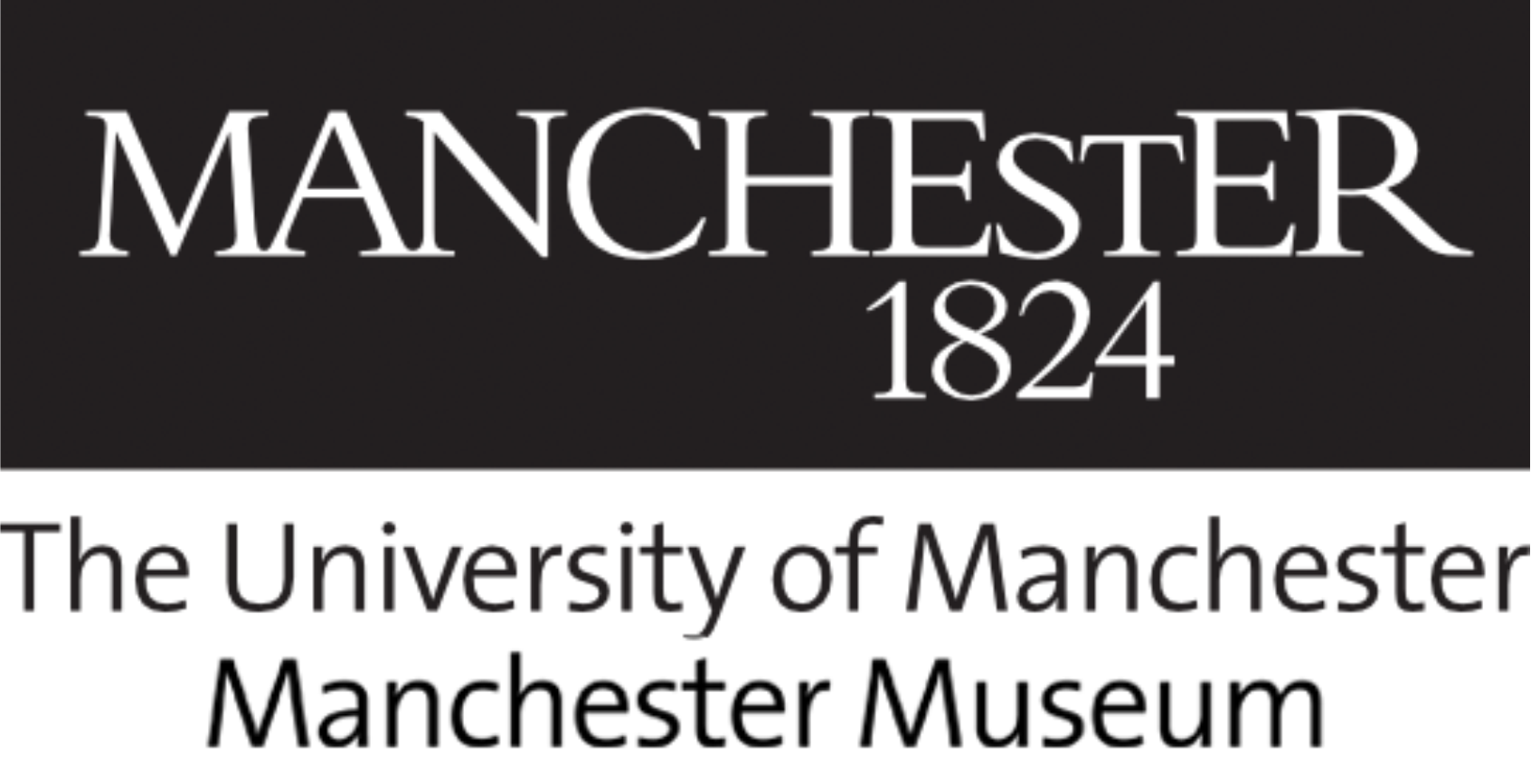 We hosted a small stand in ‘The Manchester Museum’ as part of ‘University of Manchester Community Fest’. As this was an event aimed at families, we had a colouring activity for children. We asked the children to colour what they think ‘good’ and ‘bad’ bacteria would look like. While the children were engaged with this activity we asked parents questions about their views on GMO-containing cheese. These questions were:

These questions yielded a broad range of responses that are summarised below:

Do you like cheese? Is there anything specific about it you particularly enjoy?

43 people responded to this question, with 35 stating that they enjoy cheese products regularly because they like the taste. 4 people stated that they do not like cheese, again due to its taste. 2 respondents stated their indifference to cheese. There was also one lactose intolerant individual and one vegan. From this, we knew that the views we were gathering would be primarily those of cheese consumers. 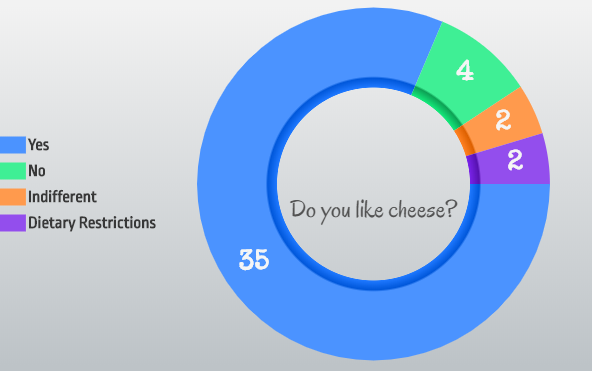 Do you have any concerns about cheese? (Particularly to do with health disease and contamination)

37 people responded to this question. 22 stated that they had no concerns about eating cheese. 7 were only concerned if they were pregnant. 3 respondents expressed dietary concerns, with 2 further expressing concerns specifically to do with cholesterol levels. 1 respondent each voiced concerns about handmade cheeses only, Listeria contamination and concern only for children.
This showed us that cheese is considered a safe product. On the other hand, people who encountered cheese-related issues among their relatives considered dairy products less safe and are choosing them more carefully. 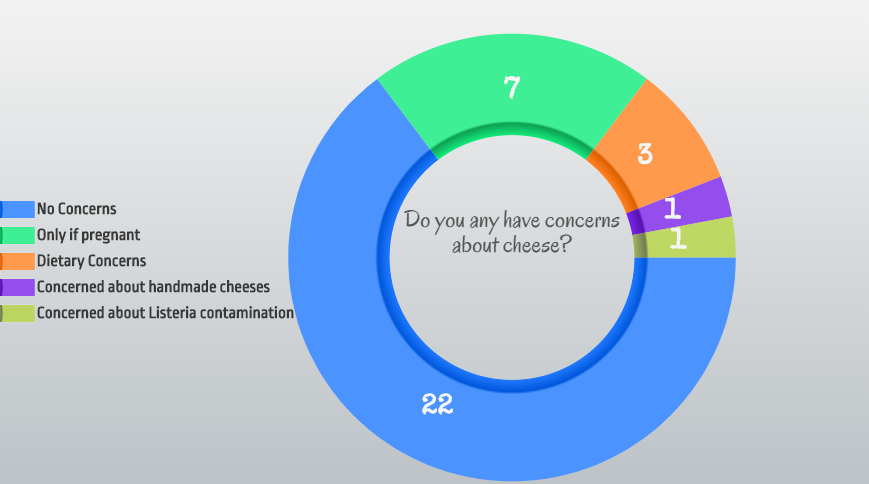 Do you take steps to minimise your concerns about cheese?

Of the 11 people that responded to this question, 3 took no actions. 3 attempt to limit the quantity they eat. 2 keep it refrigerated. 2 did not eat soft cheeses when pregnant. 1 did not buy handmade cheeses. 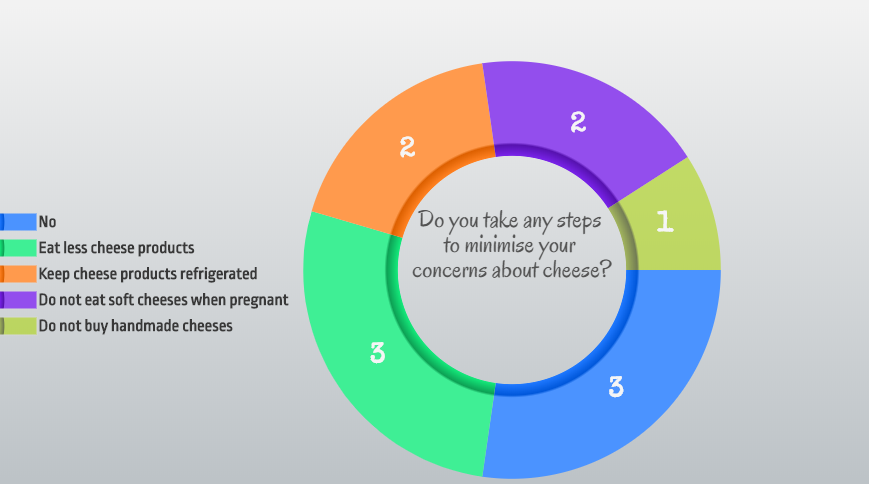 What are your feelings regarding genetic modification?

We gained 27 responses to this question which are summarised below:

These responses informed us that much of the public are pro-GM if the technology is being used to benefit health, but are less supportive it is simply being used to reduce costs of production. There was less strong opposition than we predicted.

What would convince you to (or not) eat our GM food?

A significant number of people were supportive of our product if it were not sold at a higher price. Another common trend was a requirement of better education on GM technology to be confident in consuming our product. Possibly the most impactful comment was the trend that people are more happy to consume a GM bacteria that is commensal and well known as it removes much of the uncertainty. At this stage in our project we were planning on using a probiotic stran of E. coli Nissle 1917. However, E.coli is commonly associated with disease in the public and media so a switch to a ‘good’ bacteria would be preferred. From these data we decided to integrate our system into the already present Lactococcus lactis rather than E.coli in order avoid the public fear of E.coli.

How would you feel about using genetic modification technology to make cheese safer? (Sticker chart for children and adults) (0=Would not eat such a cheese. 10=Would eat such a cheese as normal) 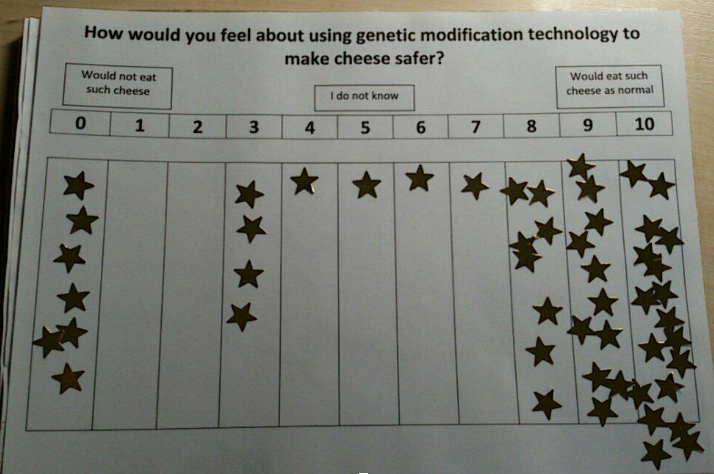 From our sticker chart, it can be seen that we gained generally positive responses from the general public about our idea.