Since we wanted to design our Listeria detection system to work both E. coli (for testing) and in Lactococcus lactis (for the industrial application), we wanted to select a promoter that would work well in both species. We came across a paper by Jensen and Hammer, who designed a series of 37 constitutive promoters and characterised their activity in both E. coli and L. lactis using a beta galactosidase assay. They provided an image of aligned sequences juxtaposed with their activity in both species, and this made us wonder whether we could selectively alter certain parts of these sequences to optimise their activity for our purposes. We realised this would mean designing a more active constitutive promoter for our agrC and agrA sensing components, as we want these to be expressed all the time and in large amounts. However, this tool could be used by other iGEM teams who may want a promoter associated with a lower constitutive expression to keep readthrough expression levels at a low level (for more information, see our Collaborations Page)

For our project we wanted a way to determine the number of our sensor bacteria required in the starter culture of a given cheese in order to ensure an accurate detection of Listeria contamination. We also aimed to estimate the time taken for our sensing bacteria to respond to Listeria contamination. To accomplish these goals, we designed a series of ordinary differential equations (ODE’s) to model the rate at which each component of the agr system is up-regulated in response to AIP, and another set of ODE’s to model the response time of each step in our sensors detection system.

Each step in the regulation of AIP production and subsequent detection was defined as a “reaction” and each reaction was assigned a custom “kinetic law” to govern the rate at which that step is upregulated in response to AIP. This was done in the symbiology app of MatLab.

Each reaction and its associated equation are shown below, see the end of this article for a table defining each variable and its units.

Two compartments were generated in symbiology, one for Listeria (called cell), and one for our sensing bacteria (called sensor).

For our Listeria compartment we modelled the following reactions:

Highlighted here, in blue, is the equation used to describe the agr operon transcription. The equation format is as follow:

Note: the comma in the highlighted section represents an equals sign, and this format is used for all subsequent equations. All terms are defined in an Abbreviation's table (see below).

2. Rate of AgrB integration into the membrane after AIP stimulus (TB)

This equation takes in to account the concentration of agrB already present in the Listeria membrane (before AIP stimulation), the rate of agrB translation and degradation, but also the rate of agrB removal from the membrane.

3. Rate of AgrD association with transmembrane B after AIP stimulus

For this equation, we considered the pre-exisiting concentration of agrD, the rate of its degradation, the concentration of transmembrane agrB and the rate at which it agrD will associate and dissociate with agrB.

4.Rate of AgrC integration into the membrane after AIP stimulus

This equation takes in to account the concentration of agrC already present in the Listeria membrane (before AIP stimulation), the rate of agrC translation and degradation, but also the rate of agrC removal from the membrane.

5. Rate of increase in the extracellular AIP concentration

To calculate this, our equation considered the production and degradation rates of all agr components, and their combined interactions as each step is important for the rate of increase in extracellular AIP as AIP is self-regulatory.

This required incorporating the result from the rate of extracellular AIP concentration equation, but also the amount of agrC a particular Listeria was expressing.

8. Rate of interaction of Phosphorylated AgrA with the promoter for the agr operon (PII)

For this final equation in our Listeria model we considered the number of copies of the PII promoter, and the concentration of phosphorylated agrA.

For the sensor, we used the following additional considerations

1. The movement of AIP through the cheese and subsequent sensor AgrC binding

Using a modified Stokes-Einstein equation, we aimed to estimate the rate of diffusion through cheese, depending on a number of important biophysical cheese properties. If we assume cheese can be represented as a porous matrix, in which the “pores” are fairly large (i.e. there is space for molecules to diffuse), then we can use Fick’s diffusion to describe mass transfer between these pores. This can be done by multiplying the diffusion coefficient (calculated using the Stokes-Einstein equation) by x/y (where x is equal to the tortuosity and y is equal to the porosity of the medium). The tortuosity of a medium (in our case cheese) can be described as the difficulty a molecule encounters when trying to move through the medium, whereas the porosity can be described as the ease a molecule encounters when moving through a medium. We, therefore, decided to assign the value of x (tortuosity) as a variable describing the total amount of fat, protein, and salt within the cheese (in other words, the dry mass of the cheese), as these are all the kind of molecules that AIP would encounter as obstacles to free diffusion, and thus they represent “difficulty”. For the value of y (porosity), we assigned a variable describing the water content in the cheese (in other words, the total weight of the cheese minus its dry mass), as we theorised AIP would encounter less difficulty moving through a cheese with a higher water content.

The resulting equation is as follows:

2. AgrA phosphorylation by our sensor AgrC upon AIP binding 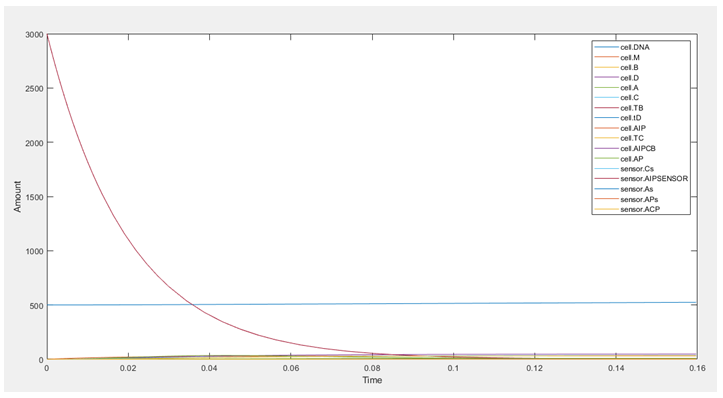 Above is an image of the graph generated when our model is simulated in MatLab. Each line corresponds to an important component in the mechanism of agr upregulation in Listeria. For the proof-of-concept simulations random values were assigned to the parameters. However, so model was set up in such a way that we could have used an ensemble modelling approach by collecting possible values from sources like Bionumbers and creating a probability distribution for each parameter. These distributions could then have been used to conduct a Bayesian analysis for plausible predictions, including confidence intervals. We would have also liked to create a user input function, to allow a user to define the properties of their specific cheese. Most importantly, cheese types vary widely in water content, and our discussions with cheese makers had shown us that this is a very important consideration for Listeria detection. By exploring the effect of different biophysical condition, our model would thus allow us to determine an accurate prediction of the concentration of our sensor bacteria required for reliable Listeria detection in a user-specific starting culture. This again is an important feature of our project, requested by cheese makers in our stakeholder discussions with various companies (read more in our Human practices page). 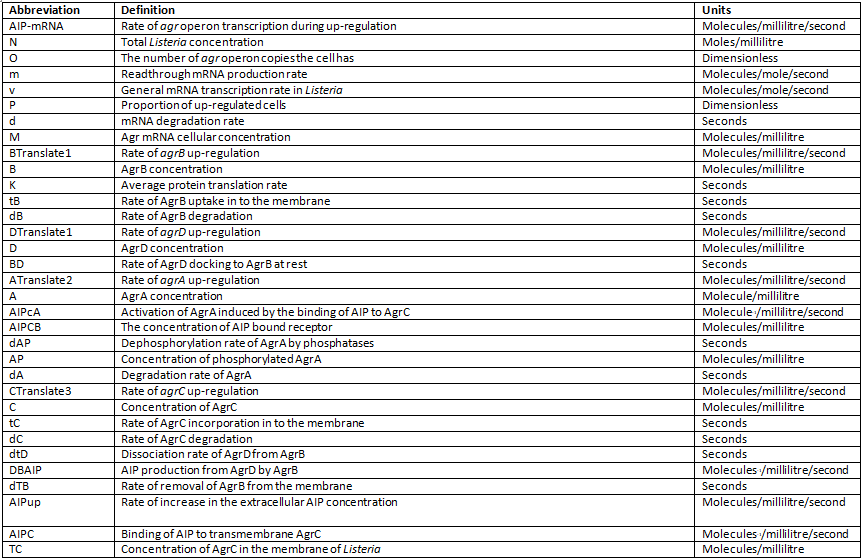 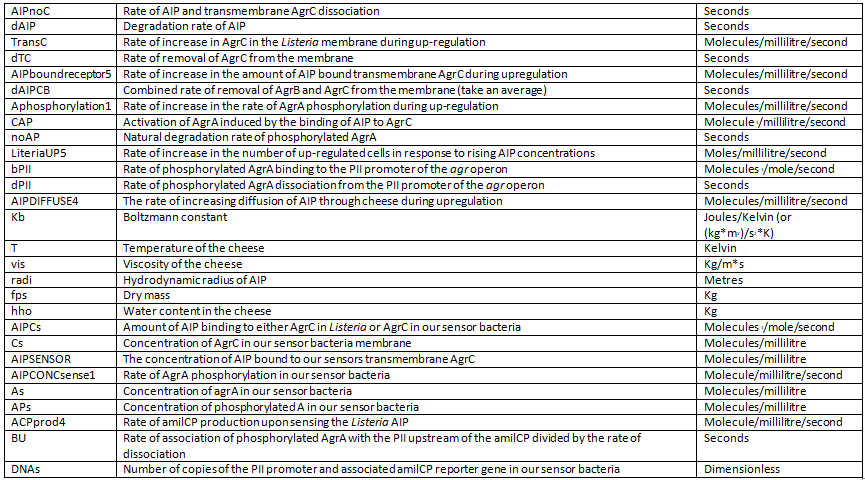