Part BBa_K2613718 consists of strong promoter CP25 (works in both Lactococcus lactis and Esherichia coli) (Jensen and Hammer’s 1998 paper), RBS (BBa_B0034),coding sequence agrA and agrC and terminators(BBa_B0010 and BBa_B0012). AgrC is a transmembrane receptor histidine kinase, which detects AIP and phosphorylates/activates AgrA. AgrA is the response regulator for AgrC and drives transcription at promoter PII. AgrC and AgrA form a two-component regulatory system, which detects AIP and drives transcription at the PII promoter. In this part, AgrC has a His tag at the N-terminus to aid in protein expression detection. 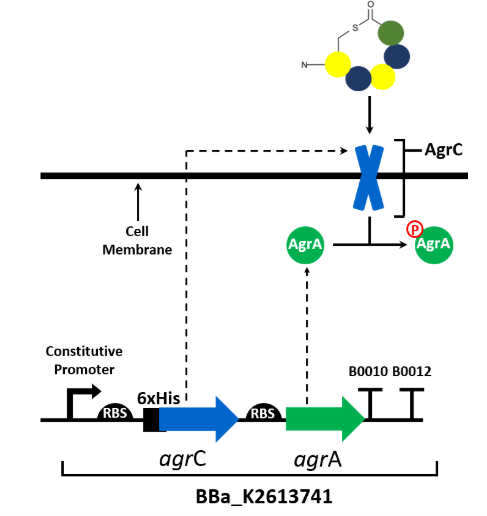 Part BBa_K2613743 consists of strong promoter pTet, RBS (BBa_B0034), coding sequence agrB and agrD and terminators(BBa_B0010 and BBa_B0012). Expression of agrB and agrD is regulated by TetR. AgrB is an integral membrane protein; AgrD is a short peptide that is transported outside of the cell by AgrB. During transportation, AgrD is covalently modified to produce a small autoinducing peptide (AIP) which can be taken up by cells and induces transcription of genes under control of PII promoter.

Part BBa_K2613740 consists of amilCP reporter under control of PII promoter, RBS(BBa_B0034) and terminators(BBa_B0010 and BBa_B0012). PII promoter is a promoter taken from the Listeria monocytogenes genome which is involved in quorum sensing. When activated AgrA binds to PII, Transcription can occur (Zetzmann, M. et al. 2016). This means that when this device detects activated AgrA, AmilCP reporter protein is produced. 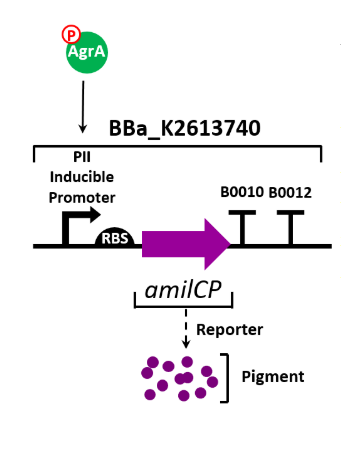 1. Zetzmann, M., Sánchez-Kopper, A., Waidmann, M., Blombach, B. and Riedel, C. (2016). Identification of the agr Peptide of Listeria monocytogenes. Frontiers in Microbiology, 7
2. Jensen, P.R. and Hammer, K., 1998. The sequence of spacers between the consensus sequences modulates the strength of prokaryotic promoters. Applied and environmental microbiology, 64(1), pp.82-87.