The endophyte is described as a kind of microorganism that inhabit in the plant endosphere at least a part of their life cycle without causing harm to the host plant [5]. On one hand, some may have benefit to plant such as growth promoting, priming effect, and soil or water cleanup assisting [15, 16] and could be used in many field. Furthermore, for agricultural usage, endophytes have been demonstrated to promote plant growth through the production of plant hormones, enhancement of nutrient uptake, nitrogen fixation, and biocontrol [6]. On the other hand, some plant-beneficial endophytic bacteria could also play a role in human pathogen such as Pseudomonas and Burkholderia. Some root-associated strains such as Burkholderia, Enterobacter, Herbaspirillum, Ochrobactrum, Pseudomonas, Ralstonia, Staphylococcus and Stenotrophomonas can encounter bivalent interactions with both plant and human hosts [2].

Burkholderia cenocepacia strain 869T2 is a plant-beneficial bacteria that originally isolated from Vetiver Grass on diesel polluted soils (Ho, 2015). Previous research has mentioned that it has the ability to decreased the disease incidence of Fusarium wilt (Panama disease) on treated banana plants. That is a great discovery because panama disease was first was first reported in Australia in 1876 and it is difficult to prevent which almost make banana extinct in the world. Furthermore, significant growth promoting of 869T2 inoculated banana plants was observed in field experiments [6]. Although it is referred to as the Burkholderia cepacia complex (Bcc), which have emerged as opportunistic pathogens that can cause infections in cystic fibrosis (CF) and immunocompromised patients [4]. After whole genome sequence analyzing, however, there is no found about common virulence factors that related to quorum sensing, surfactant and biofilm or pigment formation. Only a few siderophore precursors, for instance, Ornibactin and Salicylate, are considered to be more related to assist their growth, reduce oxidative pressure or act as co-enzyme [14]. Moreover, 869T2 has the ability to secrete pyrrolnitrin and pyrroloquinoline quinone which is antifungal substances to inhibit the survival of Fusarium oxysporum. Interestingly, pyrrolnitrin and pyrroloquinoline quinone contains chlorine and that would be a crucial part for our project [14].

Burkholderia phytofirmans strain PsJN has been thoroughly researched and is a plant growth-promoting rhizobacterium (PGPR) that stimulates plant growth and improves tolerance to abiotic stresses [13], it has been found to have ability to reduce impact of freezing temperatures on photosynthesis [12] and improve plant salt-stress tolerance [11]. It was originally isolated from surface-sterilized Glomus vesiculiferum -infected onion roots [10]. Different from 869T2, it is not referred to Bcc group, and it also unable to grow at 37°C which is considered to be essential to infect and colonize humans [4].

Phytoremediation is an eco-friendly and cost-effective way to remove low pollutants from the environment especially for soils and wastewaters by using plants [7, 17]. To enhance the efficiency of phytoremediation or to increase the functionality of bioremediation, functional endophytic was inoculated to plants, therefore inoculated plants with the extra functions have been used in several cases to remove organic chemical contaminants [7].

The ability of plants to tolerant contaminants and easy to grow is an important factor in the choice of plants for phytoremediation. Vetiver grass ( Chrysopogon zizanioides= Vetiveria zizanioides) is a fast growing grass with a massive and complex root system, its root has the potential to could grow over 7 meters. Moreover, it was found to have a high potential to adapt to the toxic environment, due to its vegetative reproduction ability [3], and also has a high ability to exclude Na + and retain K + in its leaves, which is a critical strategy for salt tolerance [9]. Furthermore, Vetiver provides erosion control and, thus, prevents contaminants from surface spreading [3]. 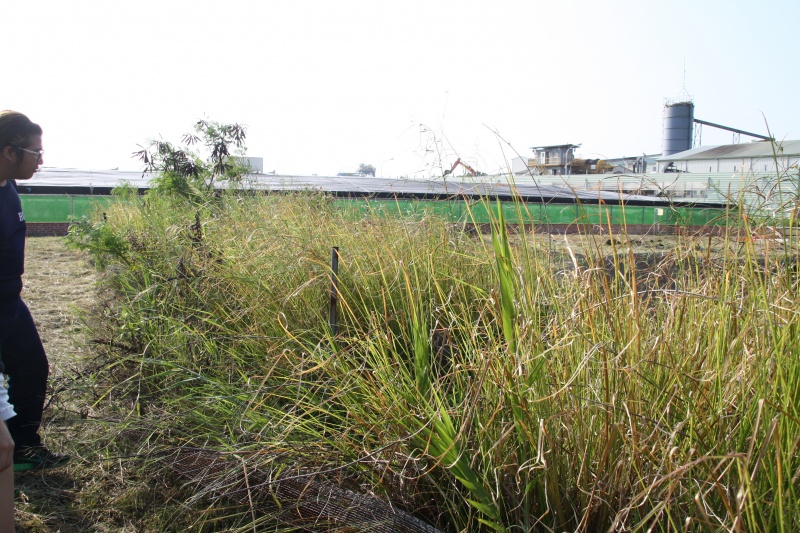 Since the mid-1970s, the breakdown of dioxins by isolated microorganisms had started studies of dioxin biodegradation. Up to now, numerous anaerobic or aerobic microbes involving fungi and bacteria are capable to degrade chlorinated dioxins by using dioxin metabolizing enzyme systems.

In aerobic conditions, a diversity of microorganisms is able to degrade lower chlorinated dioxins (with under five chlorine groups), such as Sphingomonas wittichii RW1, Pseudomonas sp. strain HH69、 Burkholderia strain JB1 bacteria and white-rot fungi such as Phanerochaete chrysosporium that degraded 2,3,7,8-tetrachlorodibenzo-pdioxin (TCDD) which is the most toxic compound of the world.

Under anaerobic environments, higher chlorinated dioxins undergo reductive dechlorination by several halorespiration bacteria such as genus Dehaloccocoides sp. strain CBDB1 that can efficiently dehalogenate of 12378-PeCDD; 1234-TeCDD; 124-TCDD and other PCDDs and utilize polychlorinated dioxins as sole electron receptors to support microbial growth. Burkholderia cenocepacia strain 869T2 that we forward-mentioned is also have the ability to degrade dioxin, it had shown capacity for dioxin transport and degradation in a previous study [19]. The most important functional gene in 869T2 is 2-haloacid dehalogenase (HAD) gene which encodes a corresponding enzyme 2-haloacid dehalogenase [18].