In order to ensure the rationality and application, we set 3 questions to ask ourselves:

1. Why can we clean up the soil with endophyte?

To ensure dioxins will be absorbed by the plant and degraded by endophyte, we used the modeling of plant uptake of dioxins. Besides, we used the model to define which parameters determined the absorbency of the plant, and took them into account for choosing the plant in our project.

2. How do the proteins perform in our project?

We created a docking simulation of proteins in our project, including TonB, HAD and Laccase, and compared the results of each protein-ligand interation. Moreover, we combined the docking result and the gene design to make our project more rationality..

3. Whether do our project have economic value?

In this part, we concerned the two aspects of economic values: land recycling and biomass fuel. We used the model to demonstrate the profit of phytoremediation, and boosted profits by gene design.

Q1 : Why can we clean up the soil with endophyte?

The largest feature of endophyte is living within a plant. As a result, we must validate if dioxins will be efficiently absorbed by root and accumulate. Otherwise, there is nothing to talk about.

The dioxin BCF sv values have been tested with crops by Jarrad and Smith. [2] 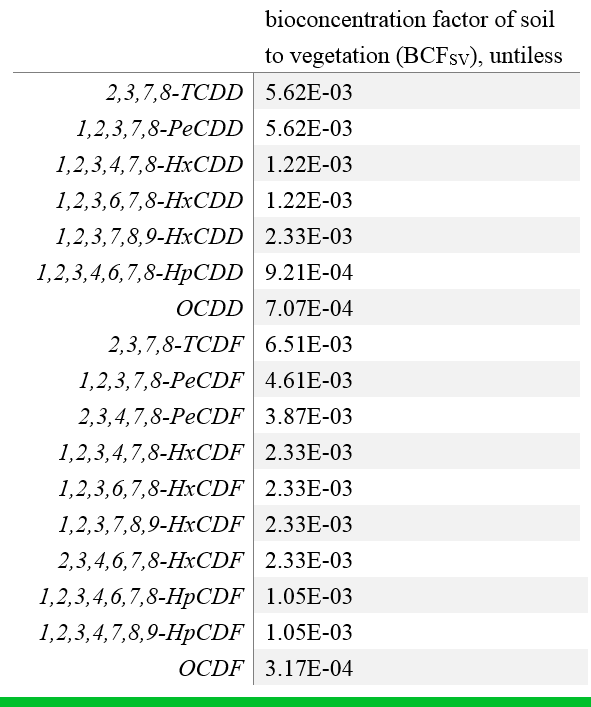 Table. 1.    17 types of the most toxic dioxins BCFsv values

We found that the BCF sv ranged from 3.17E-0 to 6.51E-03. Although, the result represented dioxins were indeed absorbed by the plant. The values are far below expectations. As a result, we used the model of the concentration in plant shoot via root uptake by Trapp and Matthies, [3] shown as bellow, to find the way to improve BCF sv.

Because \( K_{\text{plant growth}}\) was lack of data, we chose Q, TSCF, and \(V_{\text{leaf}}\) as the condition to ask the higher value of \(β_{\text{soil}}\). From the common plants for phytoremediation, Vetiver exactly meets the conditions. It has thin leaves and the high transpiration rate which cause the higher value of \(β_{\text{soil}}\). We compared Vetiver with crops, used by Jarrad and Smith. The Q, TSCF, and \(V_{\text{leaf}}\) of Vetiver are apparently greater than crop. Therefore, we used Vetiver in our project, believed that would greatly improve the BCF sv values.

Q2 : How do the proteins perform in our project?

In our project, we use the three protein, including TonB, HAD, and Laccase, to degradation dioxins. First, TonB takes dioxins in the endophyte. Then, HAD dehalogenases dioxins. Final, Laccase opens the ring and transfers into the carbon source. 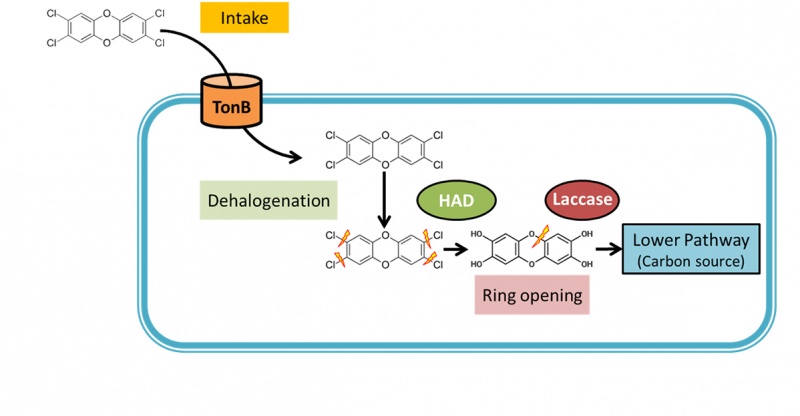 To understand the performance of each stage, we used the online modeling tool, SWISS model, to compare, simulate and create the 3D model of each protein. Then, we used iGEMDOCK to calculate 17 types of the most toxic dioxins pose energy as ligands with TonB and HAD. Because we only used TCDD as the ligand in wet lab, and we had confirmed TonB and HAD can wok with TCDD, we compared the pose energy between TCDD and other dioxins. We tried to predict our project if it can work with other dioxins types.

As for Laccase, we compared the pose energy of Laccase binding with dioxins and product of HAD. From the previous studies, we had known HAD can release the halogen and replace it with hydroxy. However, the exact product of HAD is still unknown. Accordingly, we used 40 types of dioxin compounds with hydroxy to test pose energy with Laccase.

3D model of each protein: 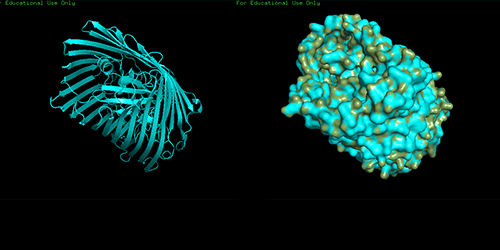 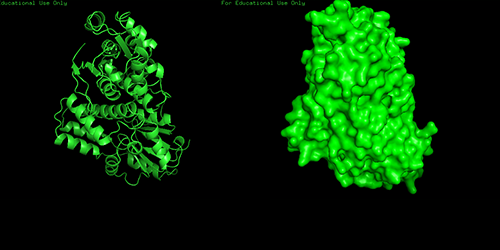 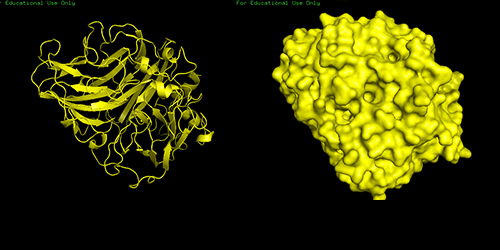 We used the scoring function to generate the pose energy by docking tool, iGEMDOCK. The interaction data includes summarized energy and individual energy terms. The empirical scoring function of iGEMDOCK is estimated as: [4] 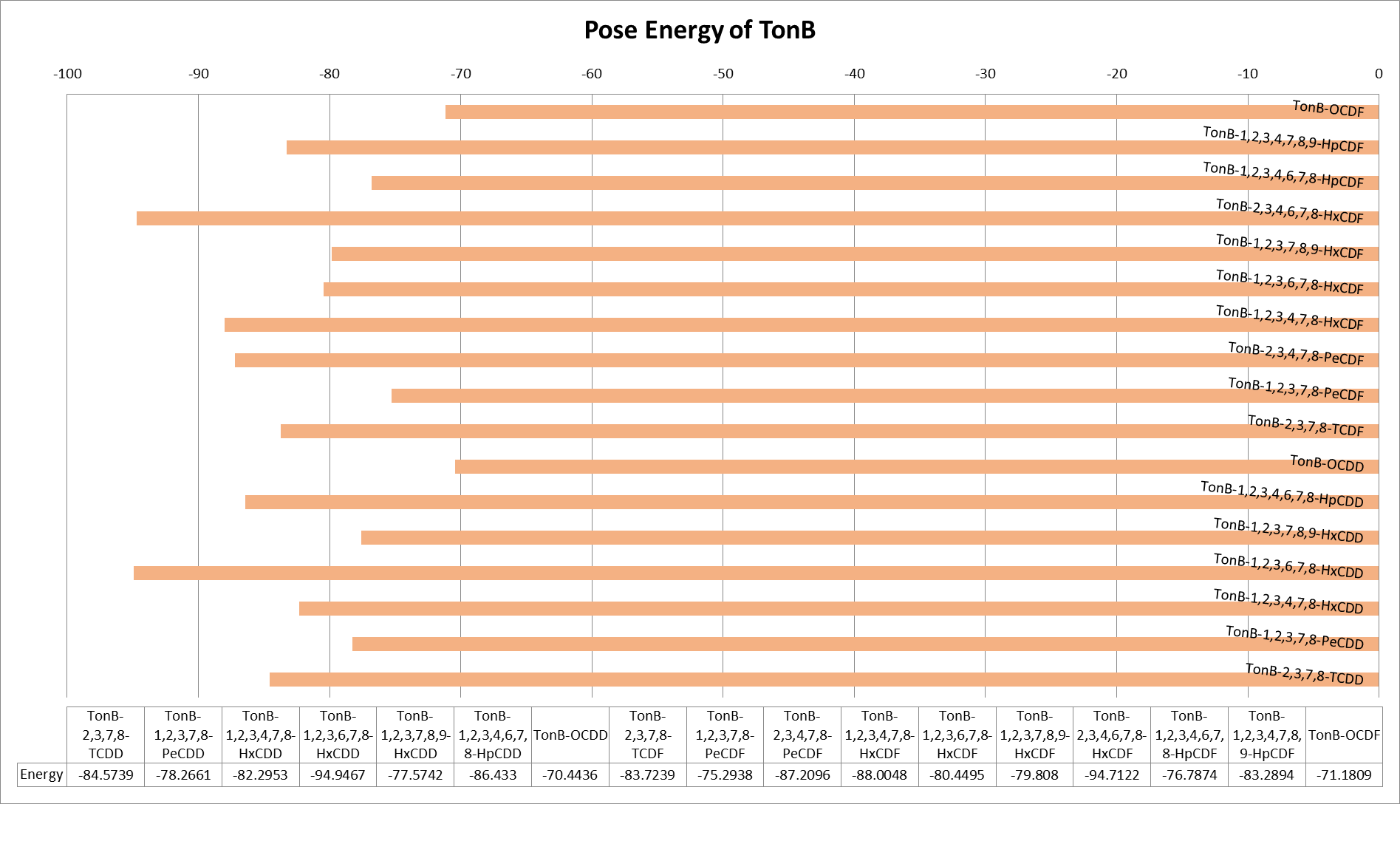 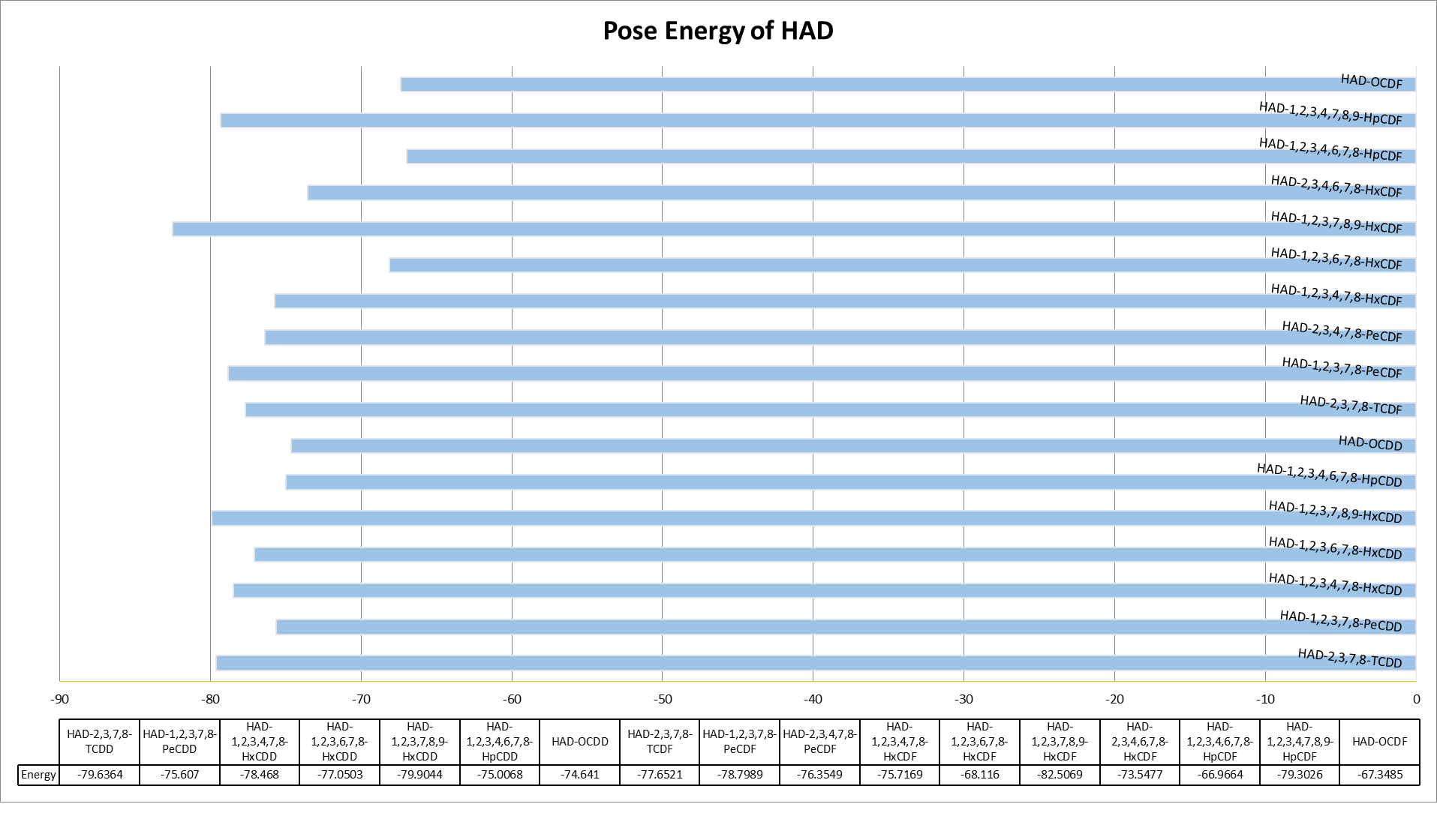 When we only concern the pose energy for binding, TonB is highly fit to dioxins. The highest pose energy in Fig. 5. is only 1.04% higher than TonB-TCDD. As for HAD in Fig. 6. , The three highest pose energy are respectively 15.91%, 15.43%, and 14.47%. The others are lower than 7%. Accordingly, HAD may not bind with some types of dioxins, but the majority of dioxins are likely to fit.


Second, Fig. 7. and Fig. 8. show the pose energy of Laccase with dioxins and dioxin compound with hydroxy. 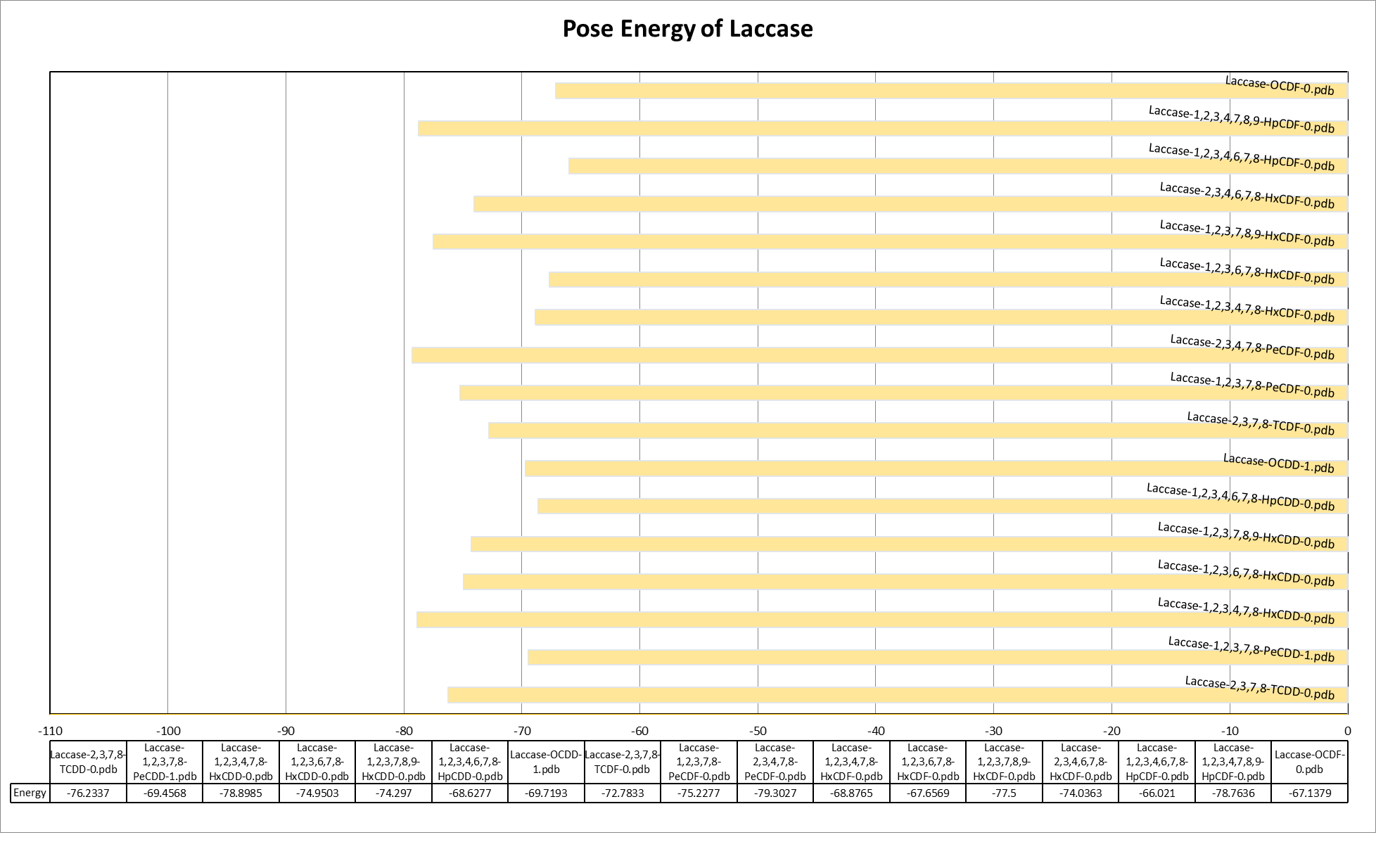 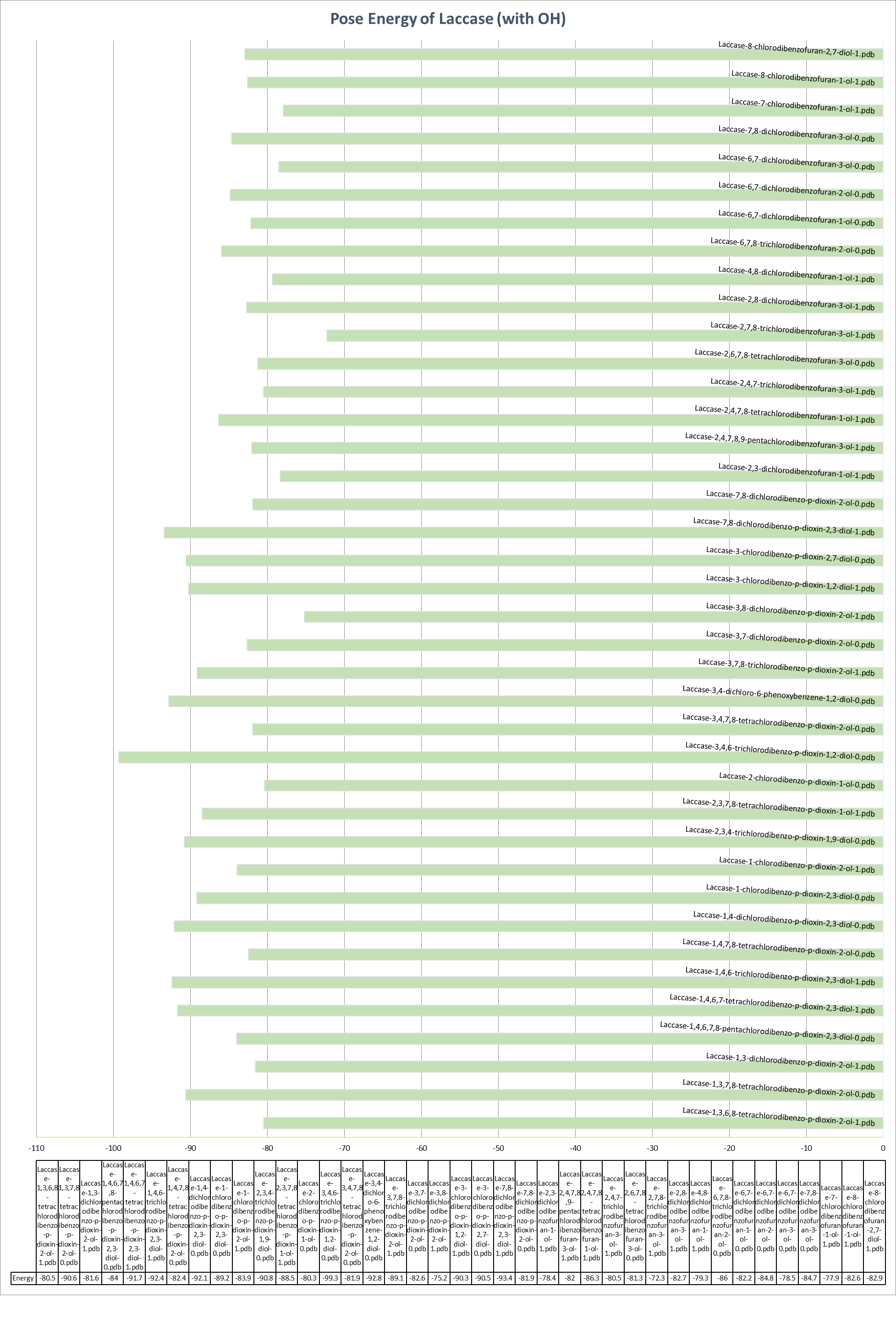 The average pose energy of Fig. 8. is apparently smaller than Fig. 7. Hence, we can assume that HAD will improve the efficiency of Laccase from post-analysis. In this case, the root of the plant will grow deeper and wider because Laccase will generate more carbon source, and the absorption efficiency will hugely boost. This result will also indirectly lead the improvement of economic value mentioned in below section.

Q3 : Whether do our project have economic value or not?

Our project can degrade dioxins in soil. The obvious value is the probability of land recycling. After remediation has been achieved, the potential financial return crop production. Besides, we can turn the plant into the biomass production. Because of the engineered endophyte work, dioxins are degraded, and the plant can be treated as the clean source of biomass.

The preliminary model was developed to show the economic benefit of our project. Therefore in our approach, the following assumptions were used: The landlord plans to continue his land activities for a period of 20 years. The production of biomass which can be combined with the phytoremediation for 6 years (which is the period that is needed to clean the soil) and the production of crops in the years 7-20. The economic benefit model is calculated by:

We used the model, Biomass Enterprise Economic Model, created by Oregon State University - College of Forestry to calculate the economic profit of biomass. The model simulated the scale of the economics of biomass enterprise. We used Vetiver as the biomass source. The relation parameter of Vetiver was assumed bellow:

We entered the data into the model. The window of model was shown bellow:

The reslut of simulation was:

The result indicated the payback of the biomass might be a deficit. For six years remediation, we would have a deficit of US 31.2. However, the current remediation techniques, thermal desoption, are more expensive. The costs associated with thermal desorption treatment approximately are US 30,000,000 in the same case. [5]

For increasing the economic value of our project, we can enhance the grown rate of Vetiver to increase the yield of biomass. Laccase just meets the requirement. Laccase turns dioxins into the carbon source and gives the plant growth nutrition. Besides, HAD can improve the efficiency of Laccase mentioned above. Therefore, we expected that Laccase will greatly increase the economic profit of our project.

1. Dioxins can well accumulate in our project plant, Vetiver.

2. TonB is fit to all common types of dioxins, and HAD can bind with the majority. And HAD can improve the efficiency of Laccase.

3. Our project have two economic values: biomass and land recycling. In addition, Laccase can increase the profit of our project.