Cell-cell pairing microfluidics have become an important and powerful platform for in vitro analysis of intercellular interactions. In our project, we developed two microfluidic systems that are capable to study cell communications especially cell signaling and cell-cell interaction such as cell adhesion.

Figure-1 Two cells are encapsulated in one droplets.(Green and red dots represent two types of cells)


Double emulsion system is a type of mature microfluidic system. It can be used to encapsulate cells and beads for single-cell sequencing. It can produce few million droplets with oil shell in a short time. We thought hardly on how it can apply more on more fields from the perspective of engineer. On one group meeting, a biological question was raised that Wnt secretion pathway is less known at present. So we are thinking about whether we can modify a list of genes of Wnt-secreting cell at a time because it is almost impossible to knockout all the genes one by one. So we thought deeply whether we can develop a high-throughput method for genetic screening. We constructed a reporter cell line that can sense the Wnt signal and emit green fluorescence. Then we encapsulate a Wnt-secreting cell and a reporter cell in droplets for coculture and signal transduction. Finally we can select droplets by microscope and flow cytometry. Explore more 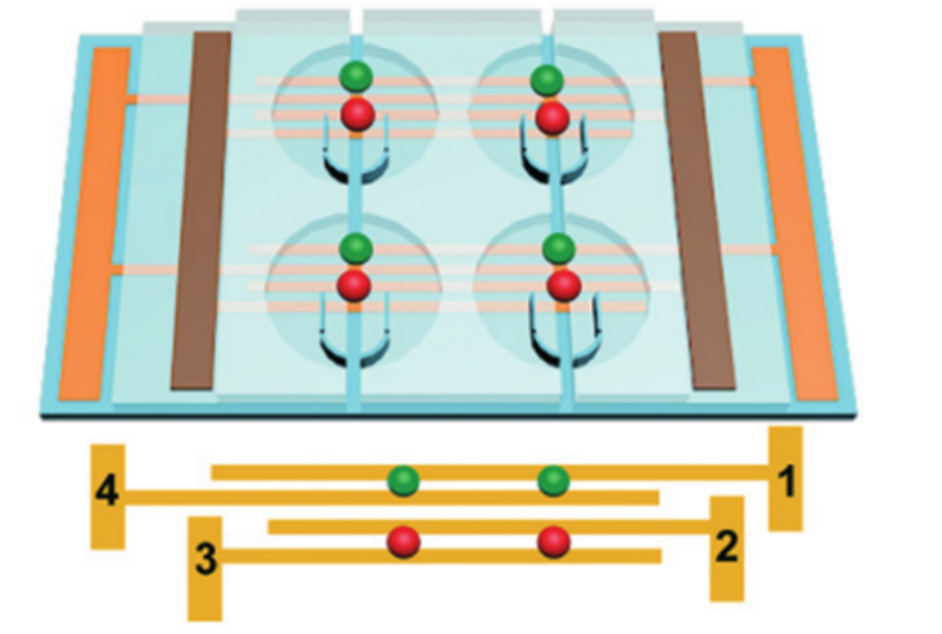 
The orthogonal method we use is the micro-well planar system. There are about 3000 micro-wells fabricated on the surface of the chip. Each well has four electrodes to provide the dielectrophoretic force. Cells will be captured by this force and fall into the wells. In collaboration with the research group in Department of Material Sciences, we are able to capture two cells successively. Two cells will be cocultured for a long time. At last, we will select them on the micromanipulator according to the fluorescence signal from reporter cells. The planar chip offers an effective way for high-throughput cell-cell pairing, which can study gene effect in Wnt secretion. Explore more


1.We are the first time in the world using double emulsion system to study cell-cell interactions.


2.we developed a new protocol to encapsulate two different cells in one droplet and improved many parameters including cell density, liquid velocity, pressure.


3.We proposed a novel and high-throughput method, Micro-well plate, to study cell communications.