We developed two systems for the same purpose to have two single cells cocultured in thousands of separated microenvironments so as to have thousands of reactions at the same time which is time-saving. One system is double emulsion system and the other is micro-well system.

As shown in Figure 1, there are two steps in double emulsion system. In the first step, two type of cells from two channels flow into the chip. Oil will cut the aqueous cell medium generating many water-in-oil droplets with size is around 30 microns. The encapsulation principle is mainly due to hydrophobic effect of oil and water. The second emulsion will form the water-in-oil-water droplets which can be used in Fluorescence-activated Cell Sorting (FACS). 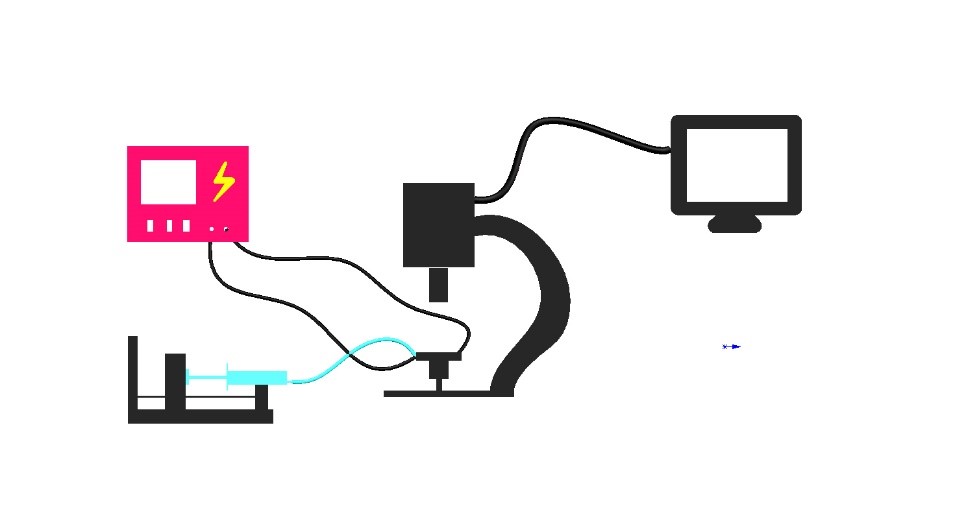 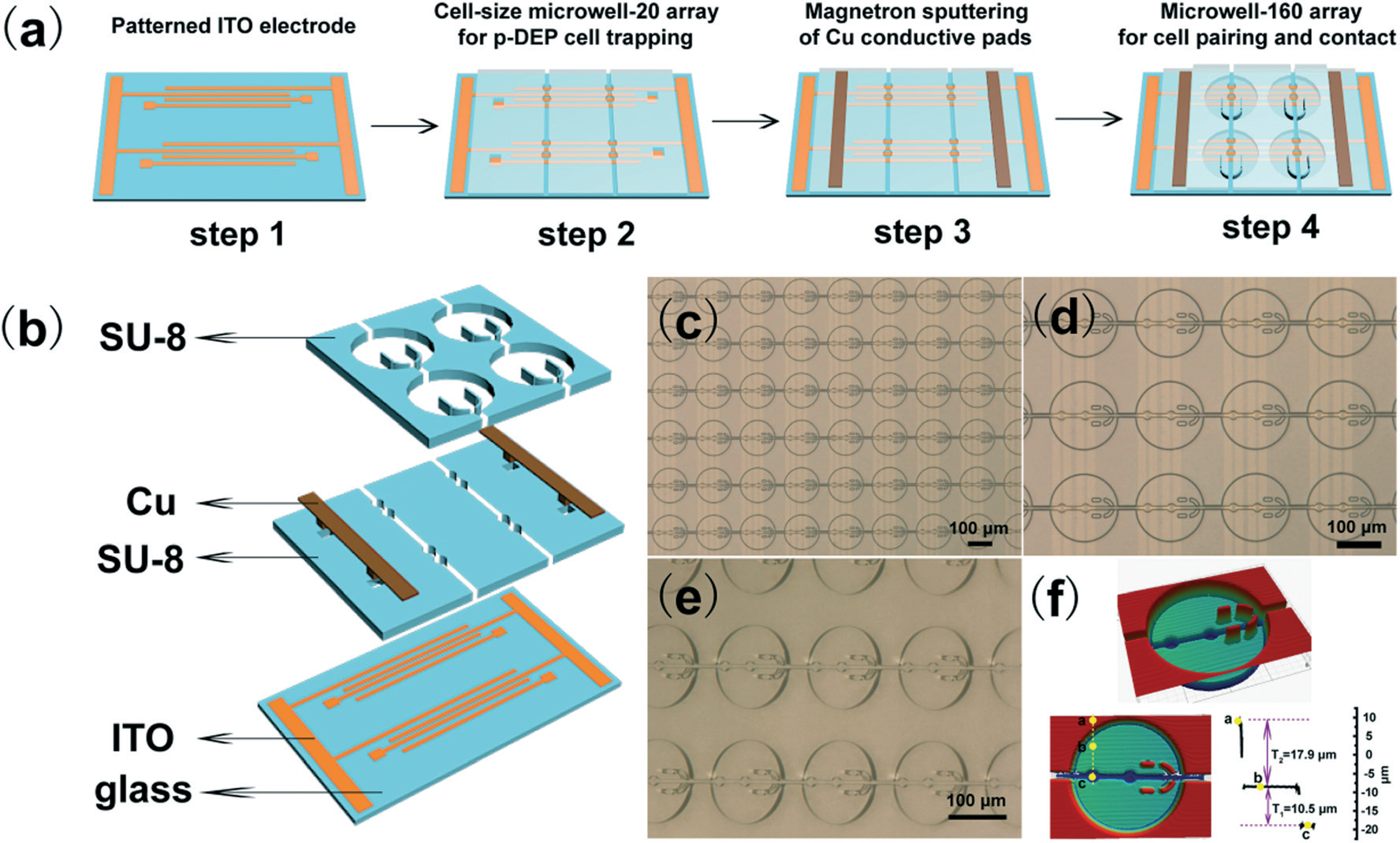 As shown in Figure 2, micro-well system can capture two types of cell in order. There are two 10-15micron wells in a 100micron well. Two cells can be captured by electrostatic force in to two wells and react separately in the well. They will be isolated into thousands of microenvironment for signal transduction. After reaction, we can pick up the cells with capillary tubes under fluorescence microscope. 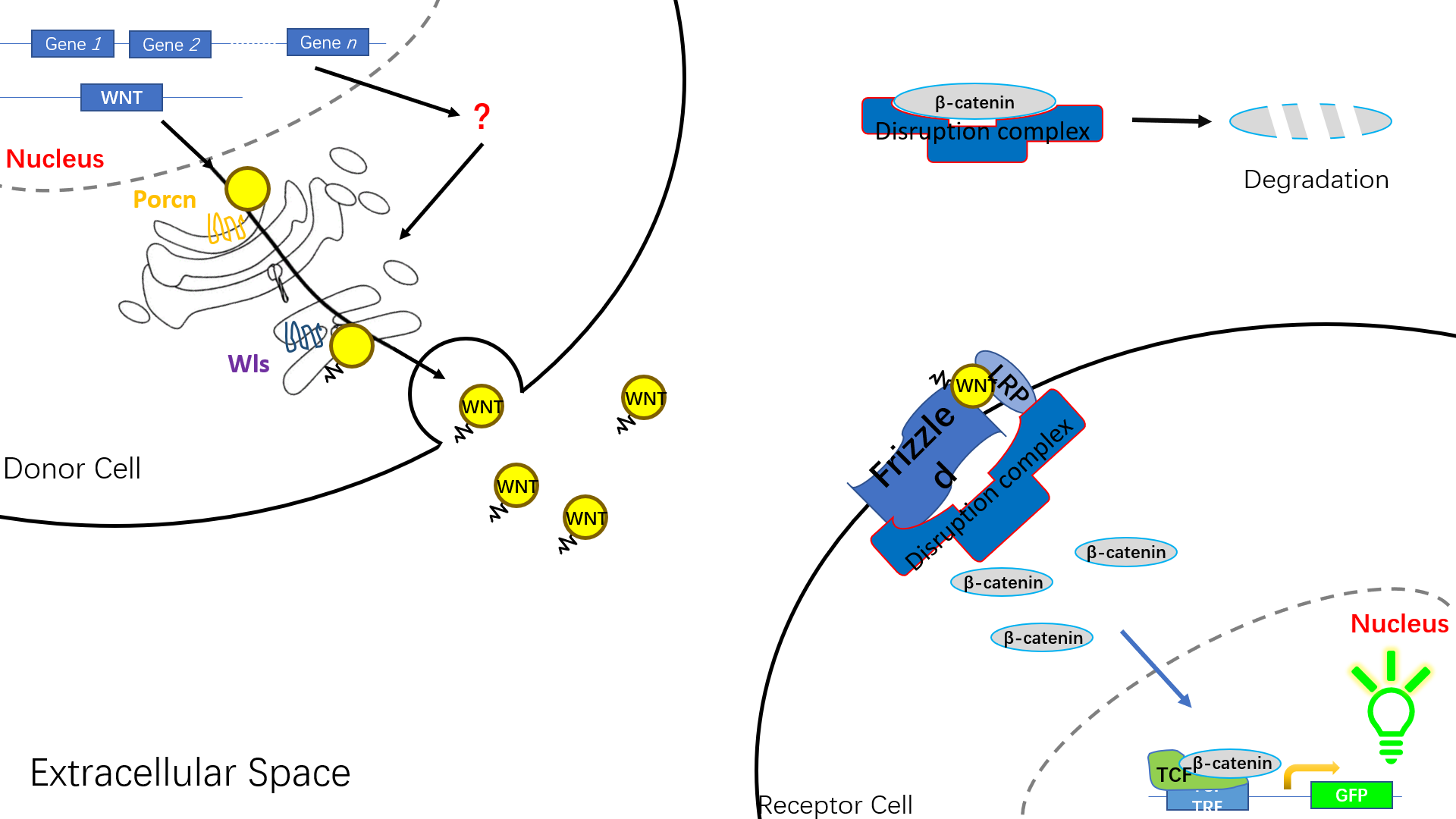 Canonical Wnt pathway plays important role in embryonic development and cancer initiation. In Wnt secreting cells, Wnt3A protein is transcribed into mRNA, which is translated into premature Wnt3A. Wnt3A protein is add a palmate tail at the C-terminal during post translational modification by a series of enzymes in ER and Golgi. It is then transported via vesicles to be secreted into the extracellular environment.

After secretion, Wnt responding cell will receipt the Wnt3A signal and cause downstream effect. The LRP5/6 and Frizzled will get close together due to presence of Wnt3A, which will induce phosphorylation of LRP5/6. And then, disruption complex will be fixed in the membrane and β-catenin protein is released. The concentration of β-catenin is increased and it enters nucleus to bind to TCF promoter and activates the downstream genes expression(GFP as a downstream target in Figure 3). 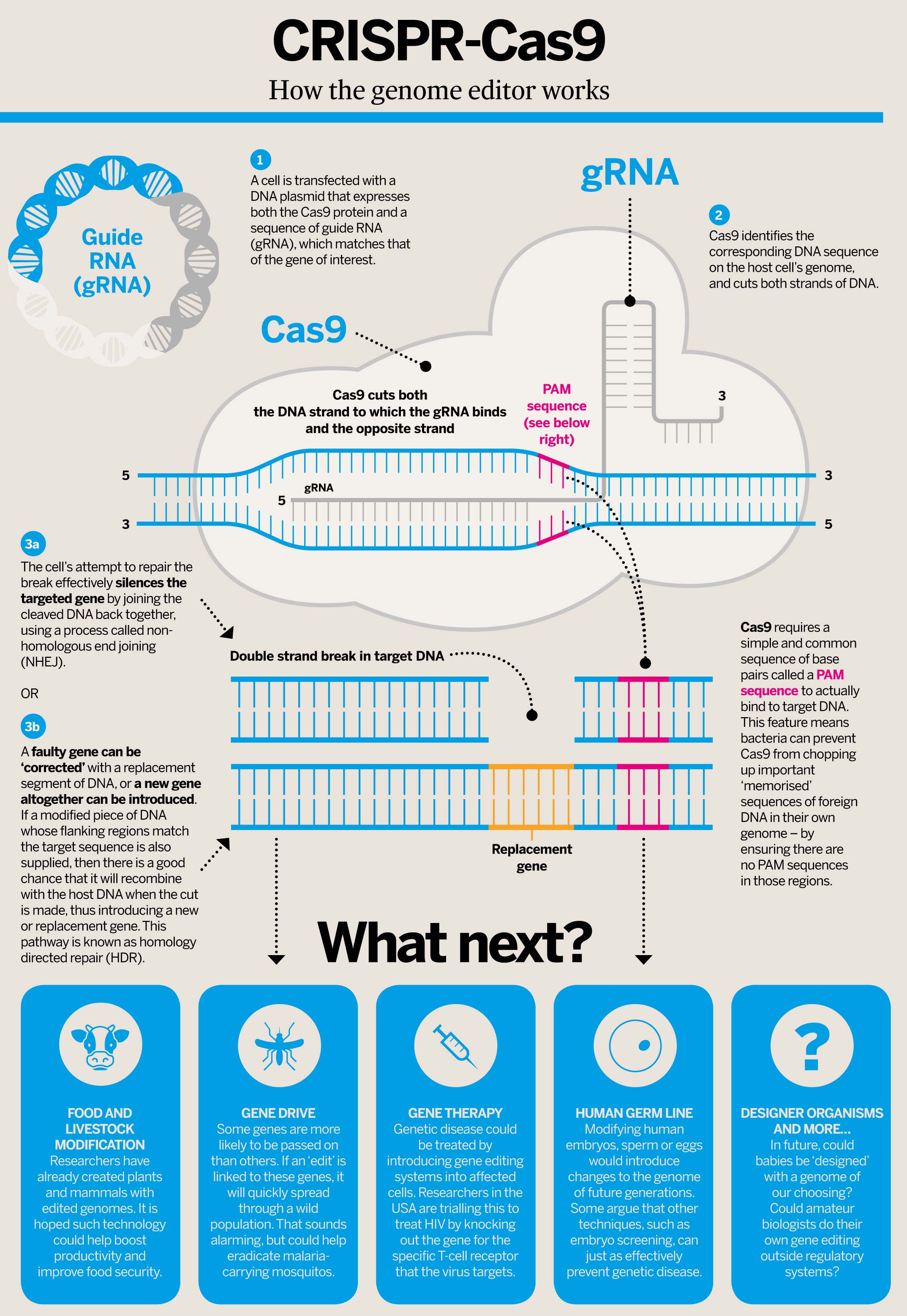 After Cas9 protein and gRNA sequence are integrated into genome of host cells though Lentiviral infection, expressed Cas9 protein can cut the target DNA sequence complementary to gRNA sequence, which can introduce loss-of-function mutations in the gene after DNA random repair.

Applying this method, we can parallelly generate thousands of single perturbations in genetic level. Genetic screening is our final goal for our system. In the experiment, we will knockout several genes (protocols) whose functions are known as proof-of-principle for our novel system. 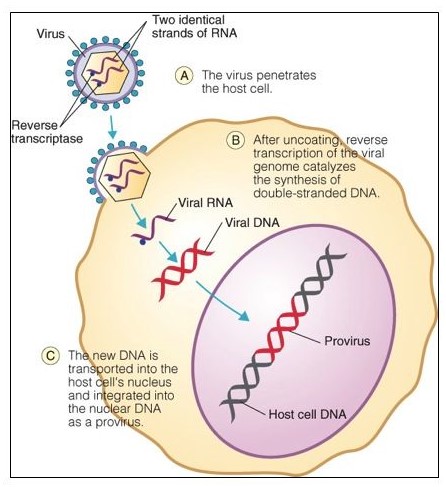 Lentivirus is produced by HEK 293T cell line and is then transfected into our target cell lines. The genetic construct in Lentiviral vector can be stably integrated into the genome of mammalian cells. And after antibiotic selection or other selection methods, a new cell line can be generated. The procedure of cell transfection contain plasmid design, virus production, cell transfection and positive selection. Safety is concerning during virus production. 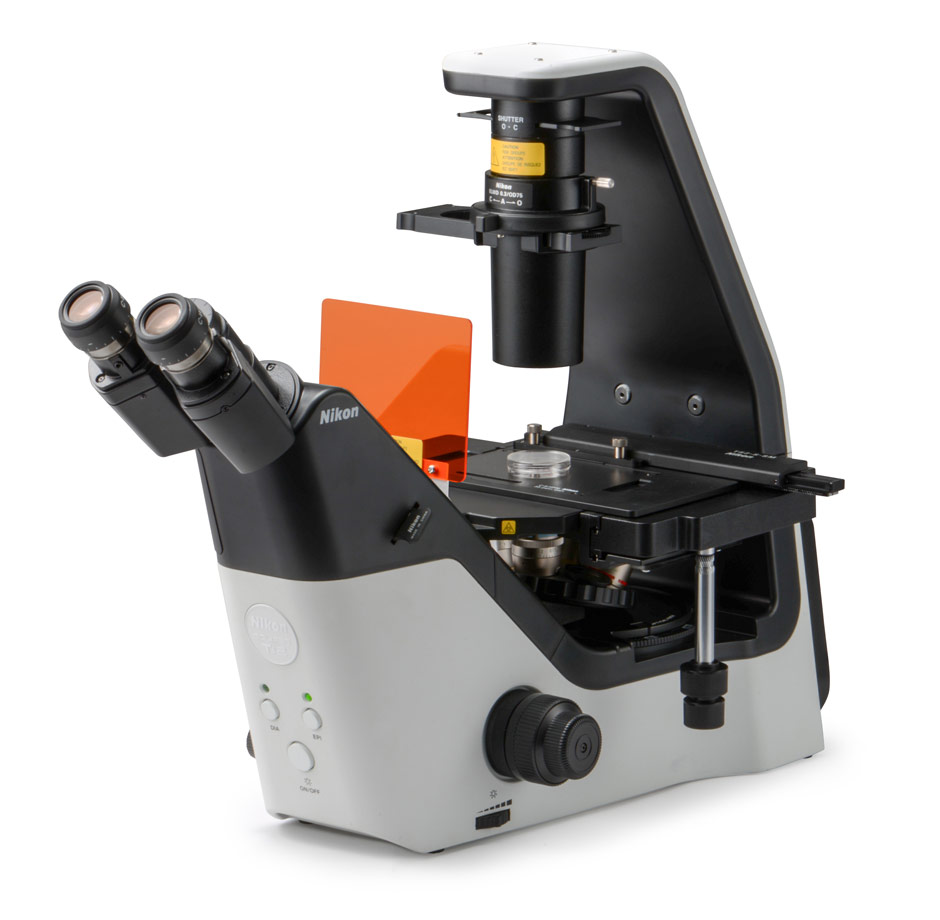 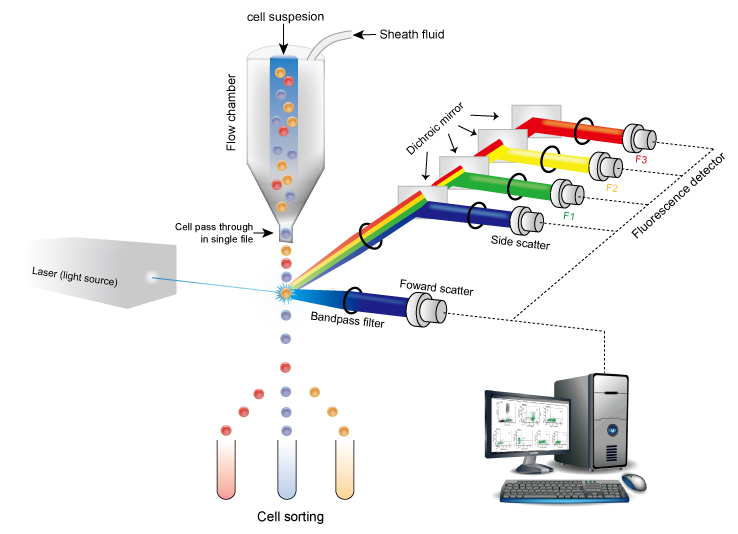 After encapsulation of two cells, cells will be coculture for a period of time. We can select microdroplets based on the fluorescence emitted from reporter cells.

The size of double emulsion droplets is about 30micron, which can be run in Fluorescence-activated cell sorter(FACS). Droplets are electrically charged based the results of analysis fluorescence. Sorting occurs then via deflection of the drop with the cell in an electrical field in different collection tubes. So, the strength of Wnt signal can be visualized and the droplet can be selected according to fluorescence threshold.

Figure 9 Flowchart of next generation sequencing

After selection, we need to extract the gene which is knockout before encapsulation. The next generation DNA sequencing will be applied to find the key genes in Wnt secretion pathway. A pair of primer on both sides of gRNA sequence are designed and enrich the gRNA sequence using Polymerase Chain Reaction(PCR). Our selected droplet have multiple gRNA so we need Illumina Sequencing to find out all the enriched gene sequence.

Finally, key genes in Wnt secretion will be screened out and listed according to its copy number in sequencing data. We can confirm their functions via one-by-one experiments.

At the same time, we use data from TCGA to predict the key gene in Wnt signaling as our comparative method in Modeling.