The detailed fabrication process for the planar chip is schematically shown below. We use a negative-type photoresist SU-8 to build micro structures on the glass, Cu and ITO to build electrodes to attract cells.


First, we prepared pair interdigitated array electrodes by patterning ITO on glass with a conventional photolithography and wet etching process. We should notice that the ITOs, which are not connected with the electrodes, will connect with Cu electrodes by the square area later. So they can provide a alternating current to produce dielectrophoretic force.


Second, a negative-type photoresist SU-8 (SU-8 2015; MicroChem Co., USA) layer was fabricated by the photolithography method. This layer contained the microwell-20 array with cell-size trapping microwells, which is aligned to the fingers of pair electrodes. The square areas of the patterned ITO layer were exposed in this SU-8 layer. Thus, they could be connected to the Cu electrodes.


Afterwards, another SU-8 layer, which contained the microwell-160 array and the “U”-shaped micro-baffle array, was fabricated in alignment with the bottom SU-8 layer. The capillary-sized channels for cell contact were inclusively fabricated in the two layers of SU-8.


Finally, we get the structure below.

Figure 2: The structure for the planar chip.


Also, a PDMS microfluidic channel, which is used for cell inlet/outlet passage and chip sealing, was further prepared to incorporate with the present planar chip. We use 3D printer to print a mold, and use PDMS to do the reverse mould. 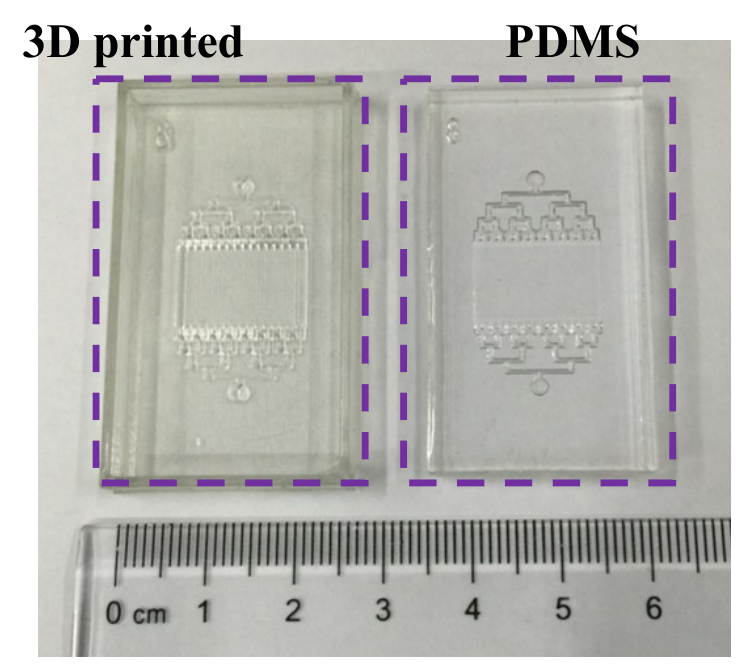 
Aim of the system 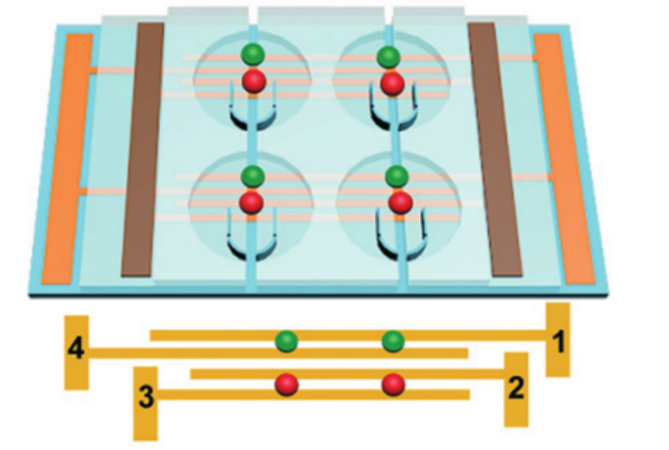 Figure 4: The aim of our system.


We will trap cells in the microwells-20. For microwell-160, two different cells will be trapped in it and react in it. Comparing to the double emulsion system, the big well just like the droplets. It can trap two different cells and let them react. Because the passage between two big wells are so tiny, it is a closed system in some degree. 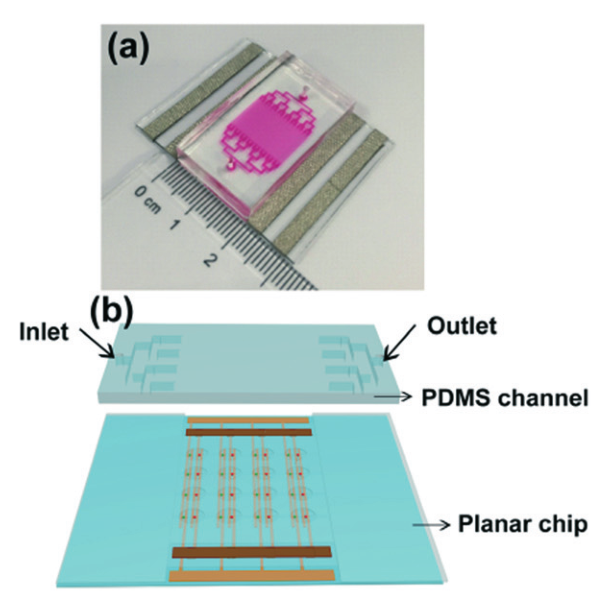 Figure 5 : Operation of our system


Before we do the experiment, we will bond the PDMS to the chip surface. Then, the inlet and outlet passages were easily prepared by punching two holes in the PDMS. The position between chips and PDMS can pass through the suspension and do the trap process. 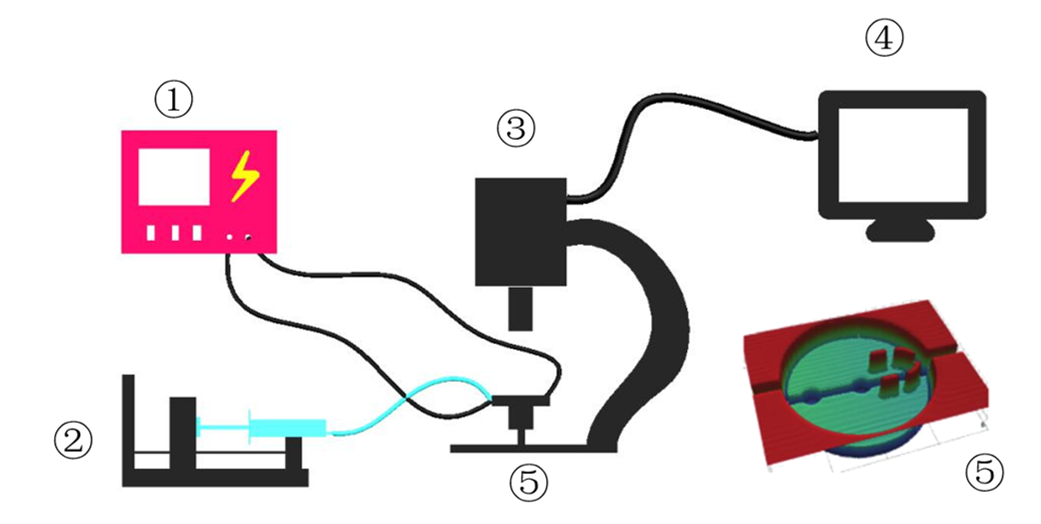 
During the cell trapping and pairing process, two types of cell suspensions were separately and consecutively flowed into the device. 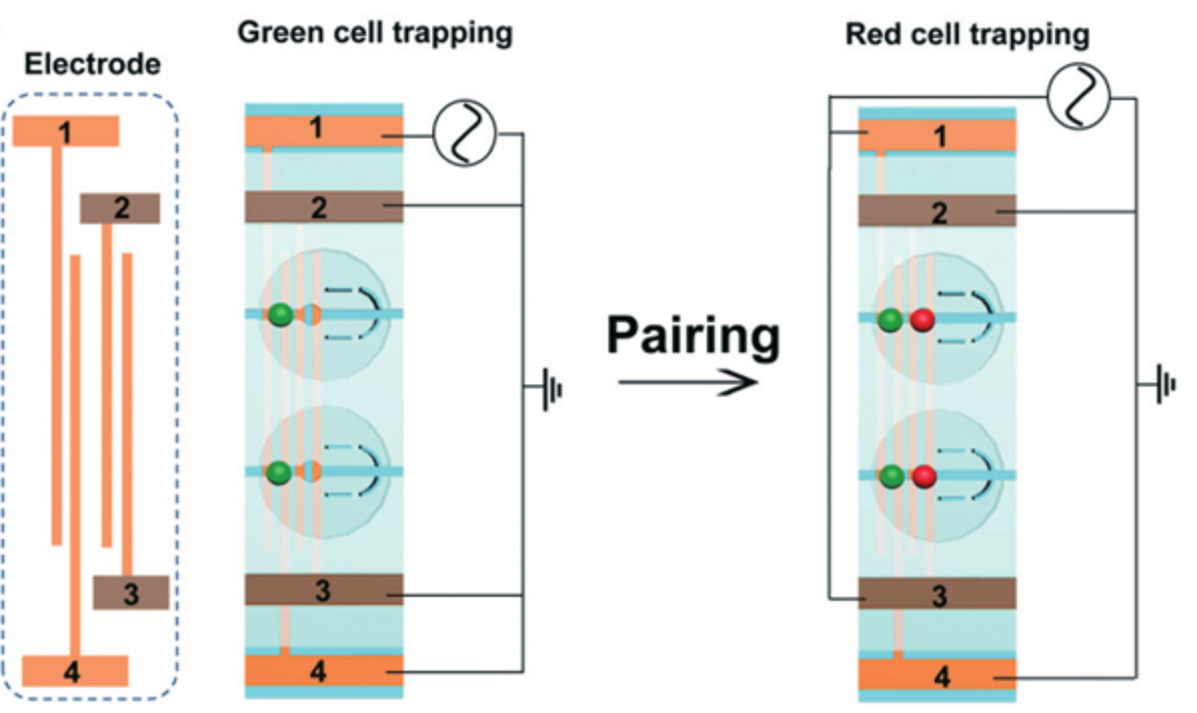 
First we introduce reporter cell suspension in the low conductivity buffer(2×10^6 cells/mL) into the chip with a flow rate of 10μL /min. Only one ITO electrode is connected to a sinusoidal ac signal (12Vpp , 4 MHz), while other electrodes were grounded together. reporter cell will be trapped in the left microwell-20. The trapping process of green cells was performed for 2-3 min. 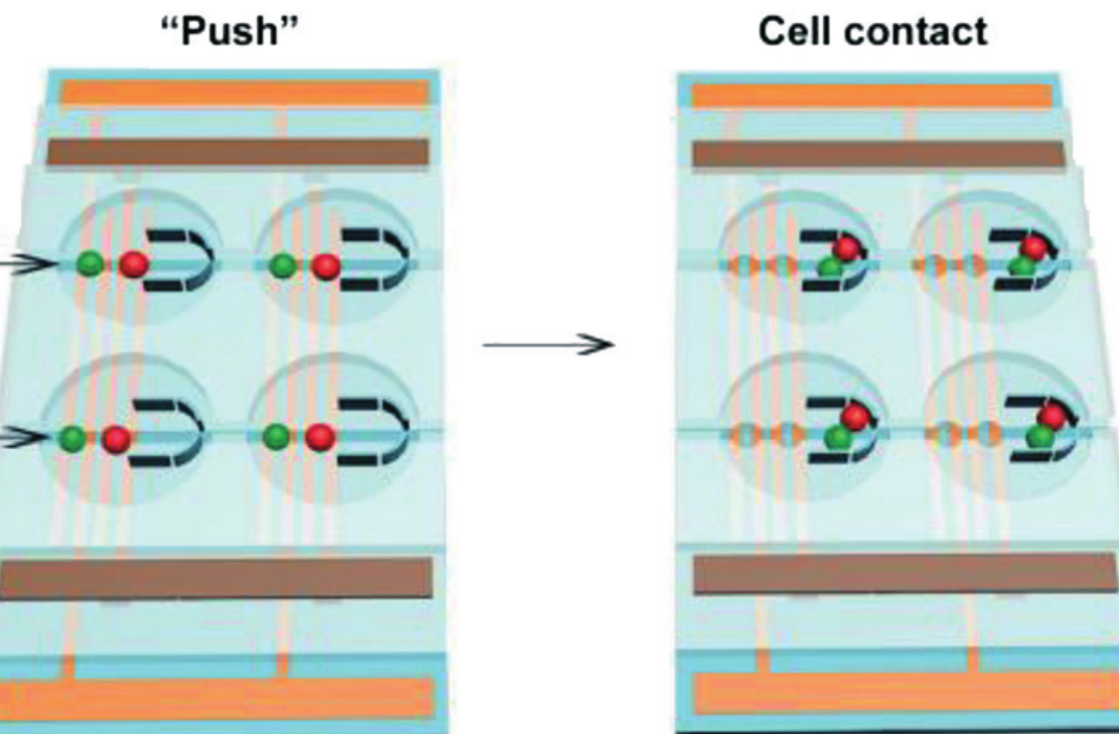 Figure 8: The flush process of cells


When the chip is clean, we placed the chip in a homemade fixture device to compress the PDMS. The PDMS is tightly bound to the planar chip by the fixture and seal the microwells. In this case, paired cells in each microwell-160 could be “pushed” into the microbaffle together by a simple buffer flow through the capillary channel. And we will let them react in the microbaffle for hours.


At last, we move the chip to micromanipulator and use capillary to extract what we want. 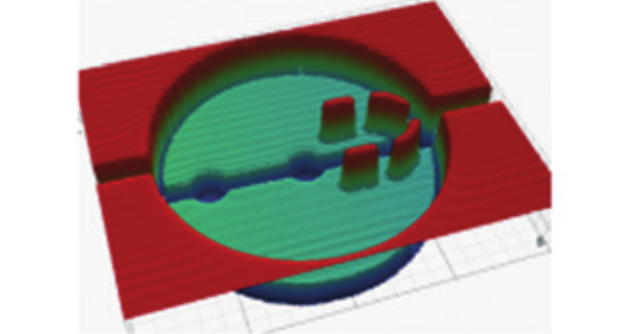 Figure 9: A micro-well in a planar plate.


For the chips: The diameters of microwell-20 and microwell-160 were gauged to be 20 μm and 160 μm, which were identical with the design. The inner space of each micro-baffle measured 30 μm in width and 40 μm in length. The capillary-sized channels with an 8 μm width, the heights of the present microwell-20 and microwell-160 were measured to be 10.5 μm and 17.9 μm, respectively. It is also worth mentioning that the diameters of microwell-20 could also be adjusted according to the type of cells in different applications. 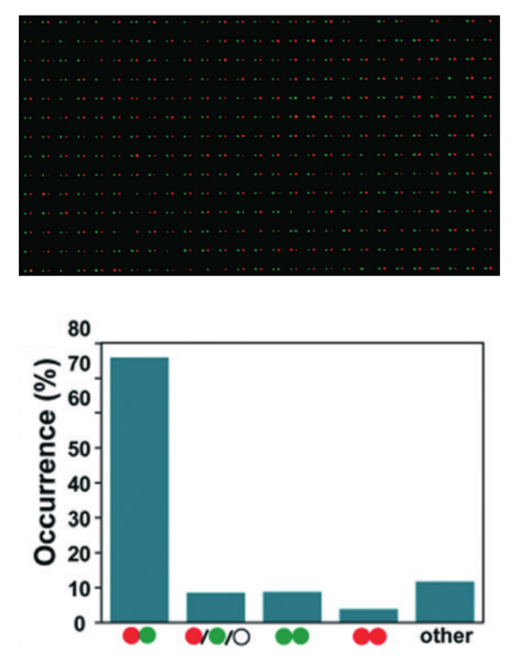 Figure 10 : Occurrence of cell types(lower) and visualization of capture in fluorescence(upper).


we obtained high single-cell trapping efficiencies towards green cells and red cells in the arrays of 78% and 83.7%. Moreover, as shown in the merged image, a high single cell-cell pairing efficiency up to 74.2% (a percentage ratio of the number of single green-red cell pairs to the number of microwells-160) was also obtained.


1.It is very fast and efficient: more than 2400 single cell-cell pairs in a microwell array in a 1×1.5 cm area by positive dielectrophoresis (p-DEP) within only several minutes.

2.It is convenient and recyclable: the planar chip could be used repeatedly by a simple water cleaning process.


1.It is very hard to fabricate a chip.


A chip will cost nearly half of a month to fabricate. It related to many precise instrument. Also because it has many layer micro structures, one small mistake can ruin the whole chip.


If you want to trap a new kind of cell, you need to do a new chip with a suitable size to the new cell. Otherwise you cannot trap the cells or you will trap two cells in one microwell-20. To solve this problem, we need to do more than two wells and including many size of cells.


As we all know, the cell will adherence when they touch the wall. Under the attraction of the dielectrophoresis, cells will adhere to the chip firmly. So we cannot use the fluid to push them together. We are trying to reduce the depth of the well and the speed of the fluid to wash away cells. Also, we may find a material that cells are not adherence. Then we pave it between cells and the chip.


Micro-well plate system is our novel idea for capture of two cells. Due to the advanced technology of fabrication, the microfluidic chip is very flexible on multiple applications such as drug selection, immunological recognition, cell signaling and Single-cell sequencing. Besides, micro-well is a two dimensional plate which can has a real-time observation under microscope. We have capability to track the dynamic change for cells or other biological phenomena.