This improved part, TCF_TATA_GFP, is designed to generate a reporter system that can senses Wnt3a signal, and is improved from normal GFP part, BBa_E0040. This part can be stably transfected into our receptor cells. When receptor cells with this part received a Wnt3a signal, beta-catenin would be released and bind to TCF, activating downstream GFP expression, as a consequence, green fluorescence can be observed. In the contrast, when there is no Wnt3a signal, the expression of GFP is shut down. In a word, Wnt3a works as a switch here in this part. (picture concerning Wnt signals is shown as Fig 1)

The WNT signaling pathway is one of the most essential cellular signal transduction pathways, which begins with reception of WNT ligands in the plasma membrane, initiating a series of downstream events. If there is no reception of WNT ligands, the subunits of disruption complex is free with the ability to bind the downstream protein β-catenin in cytoplasm, mediating its degradation, which means there is no more downstream events.(Fig1) 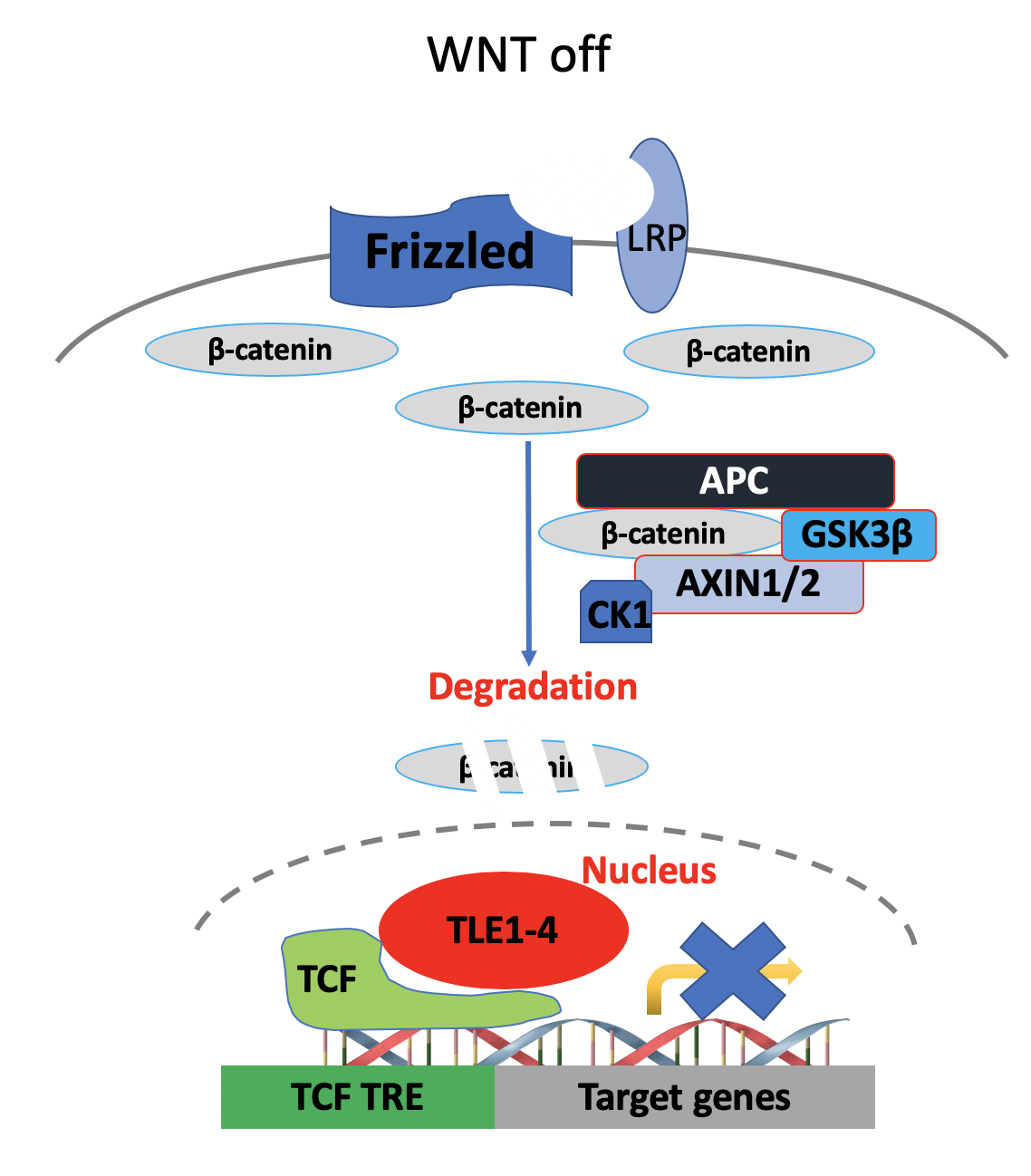 Figure1. Condition of no WNT signal

However, when WNT ligands bind to the receptor Frizzled, the disruption complex is fixed by WNT-Frizzled complex in plasma membrane, leading to the release and accumulation of β-catenin. 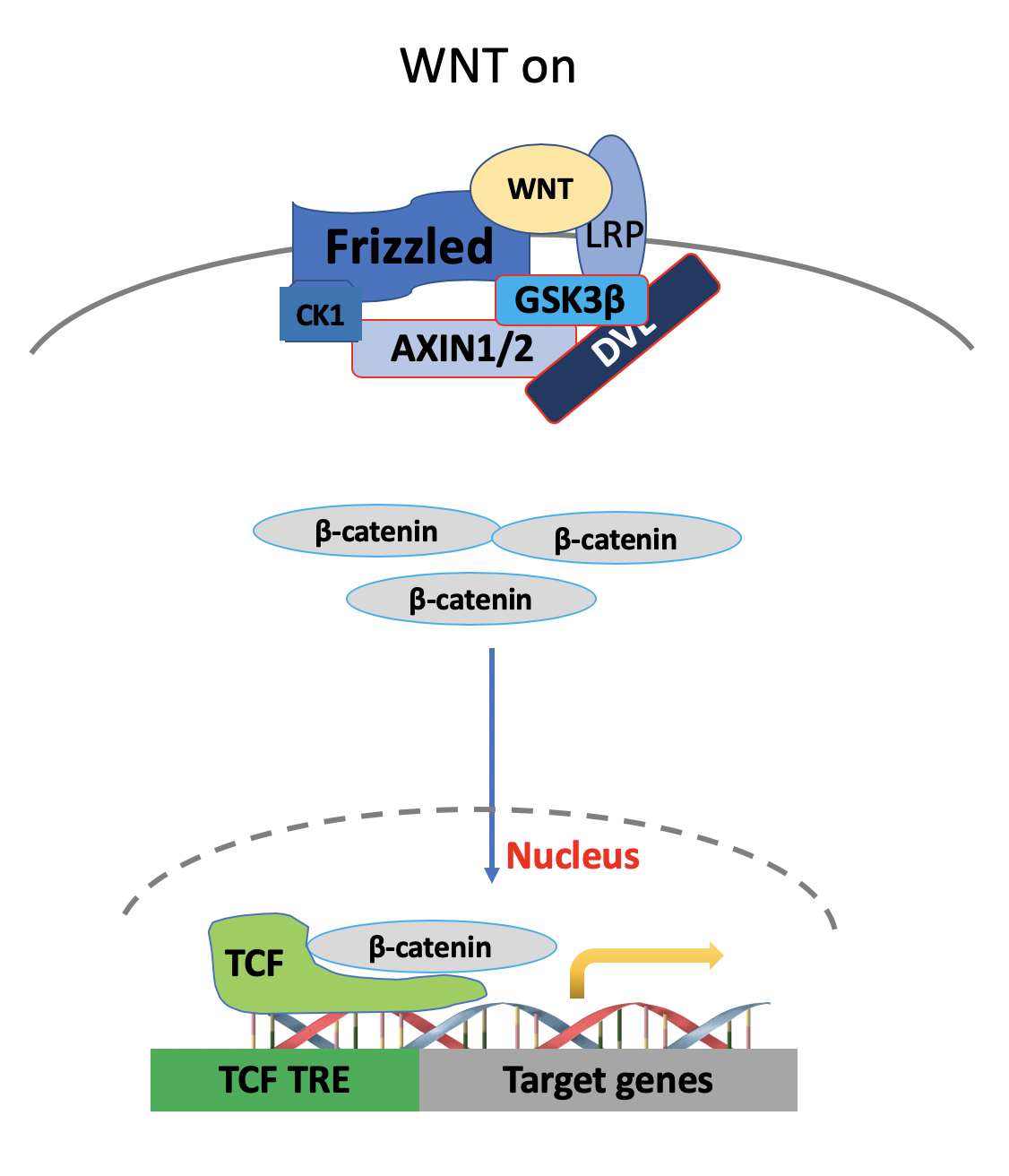 In the absence of β-catenin, TCF acts as a repressor of WNT target genes by occupying the TCF TRE, though β-catenin can convert the TCF into a transcriptional activator of the same genes.This novel process can be extracted from nature and makes up a reporter system when we replace the target genes into a fluorescence gene like GFP.

When this whole construct stably be inserted to a receptor cell line, it can sense WNT signals and give green fluorescence. 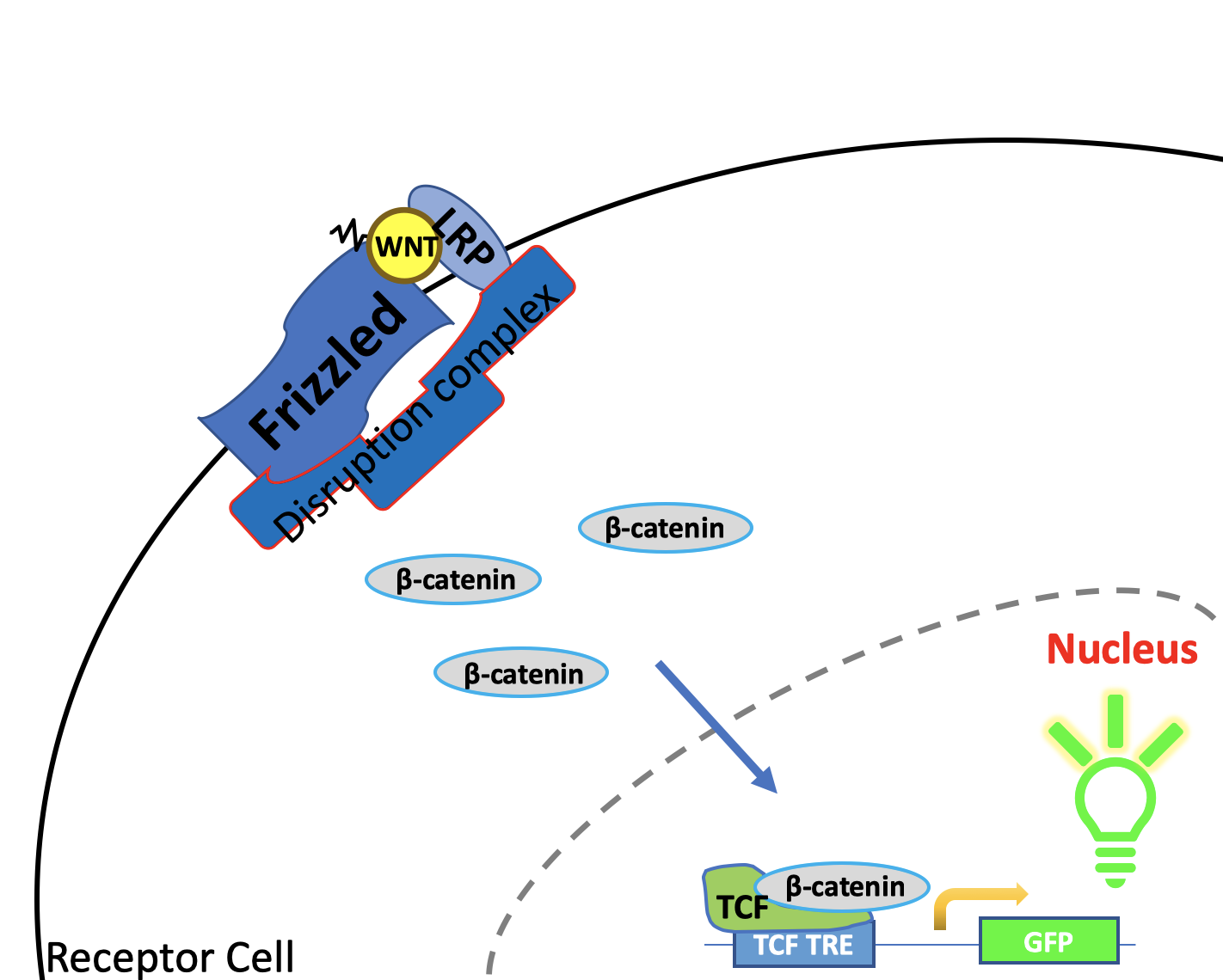 The part we construct is improved from GFP part in Registry (link to GFP part http://parts.igem.org/Part:BBa_I714891), in front of GFP, we add two TCF transcriptional response elements and a TATA box. (Fig.4) 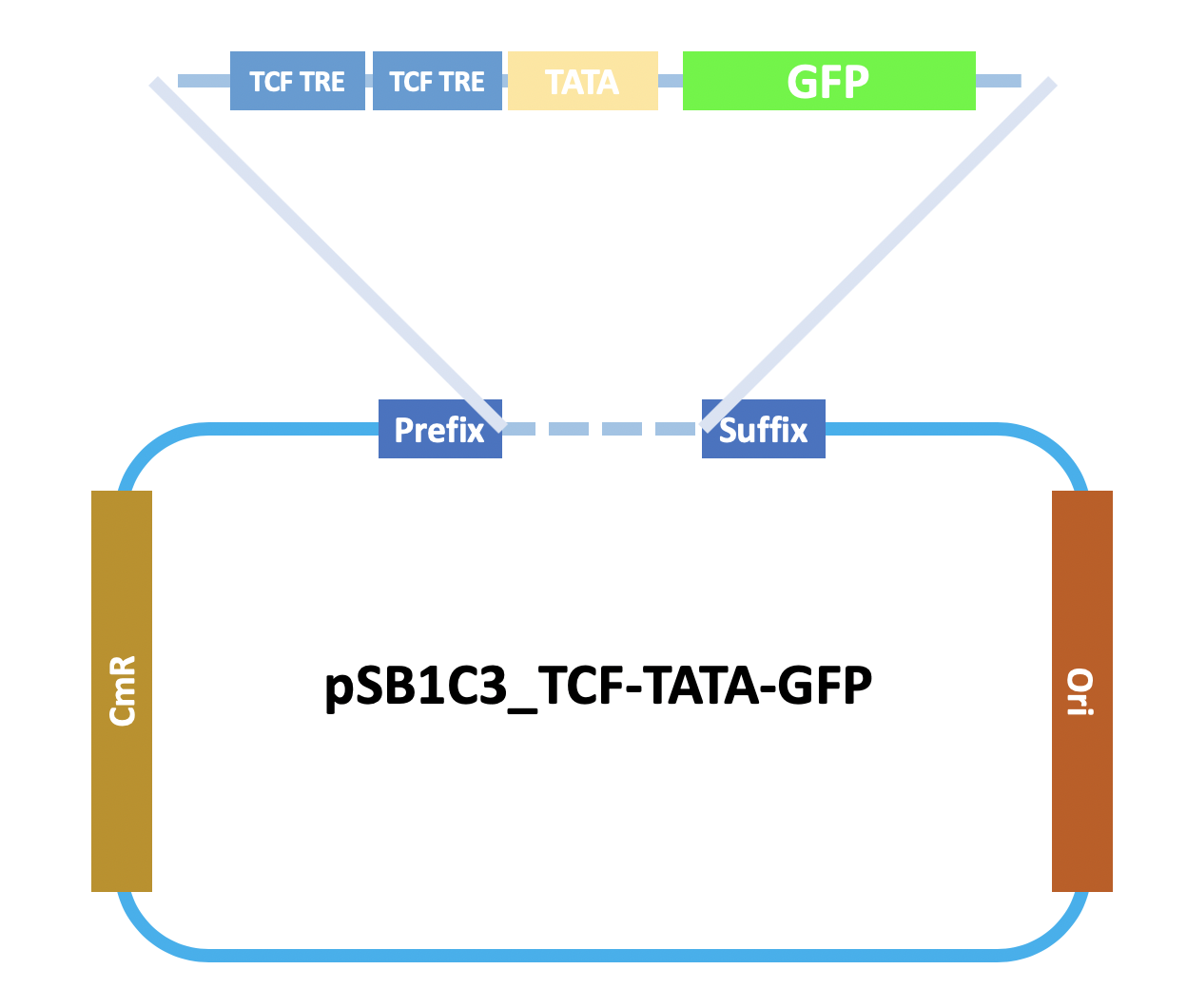 Figure4. The construct of TCF-TATA-GFP in pSB1C3

We first designed primers and construct the plasmid in Snapgene, then according to the protocols which we write previously, we did some molecular cloning experiments. Finally we got the plasmid and sent to Sanger sequencing. Forward(VF2) and reverse(VR). 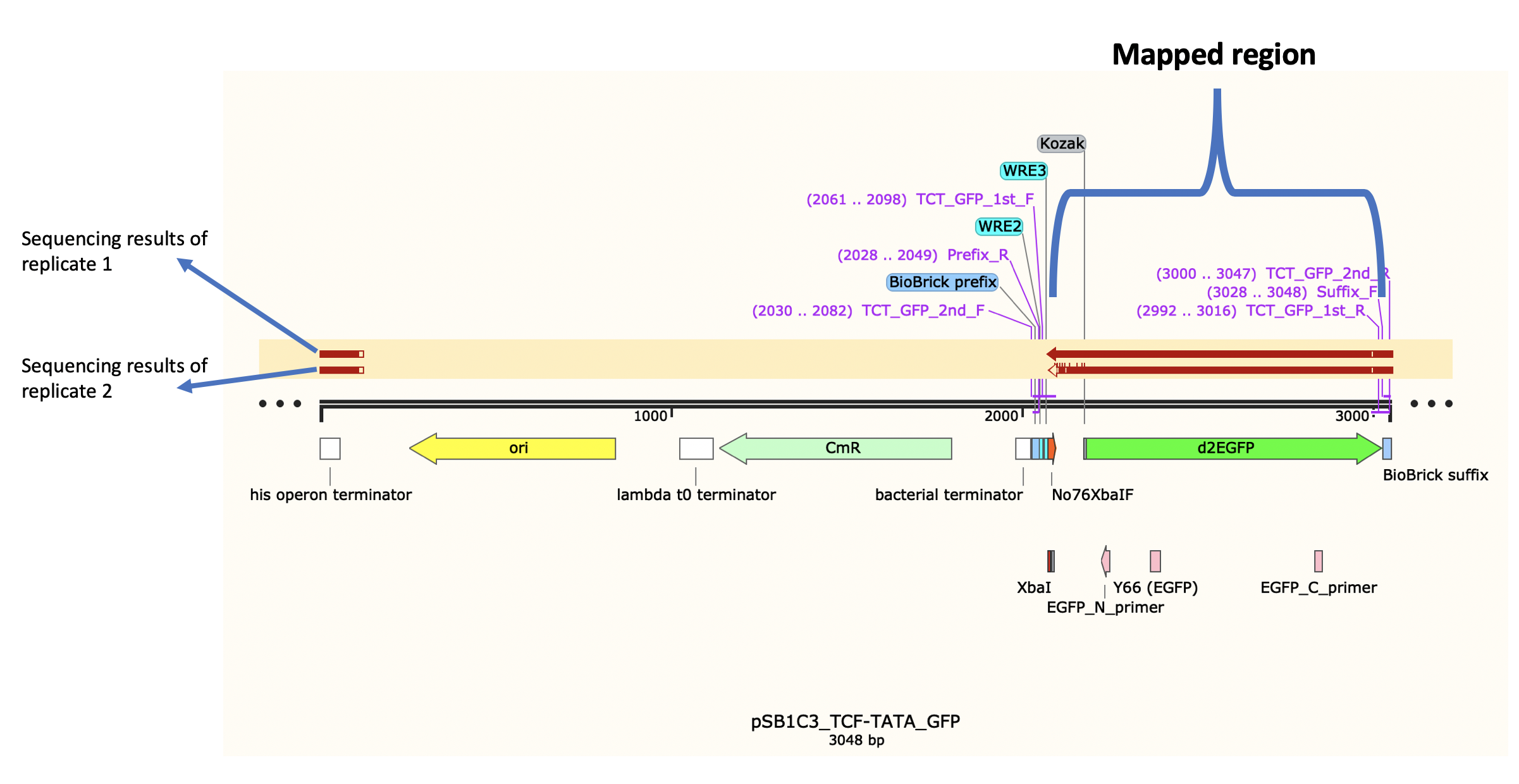 Sequencing results show that we have successfully got the right plasmid.(Fig.4) After verification in sequence level, we designed experiments to verify its function.

We have stably integrated this construct into the genome of our reporter cell line by lentiviral infection. At the same time, we have used the original part(BBa_E0040) to do the same experiments, the fluorescence images are shown in Fig5. And for TCF-GFP cells, we added Wnt3a to the culture medium, after several hours, we can observe green fluorescence under microscope(Fig.6) and also, we can see a shift in fluorescence activated cell sorting(FACS) experiments.(Fig.7) 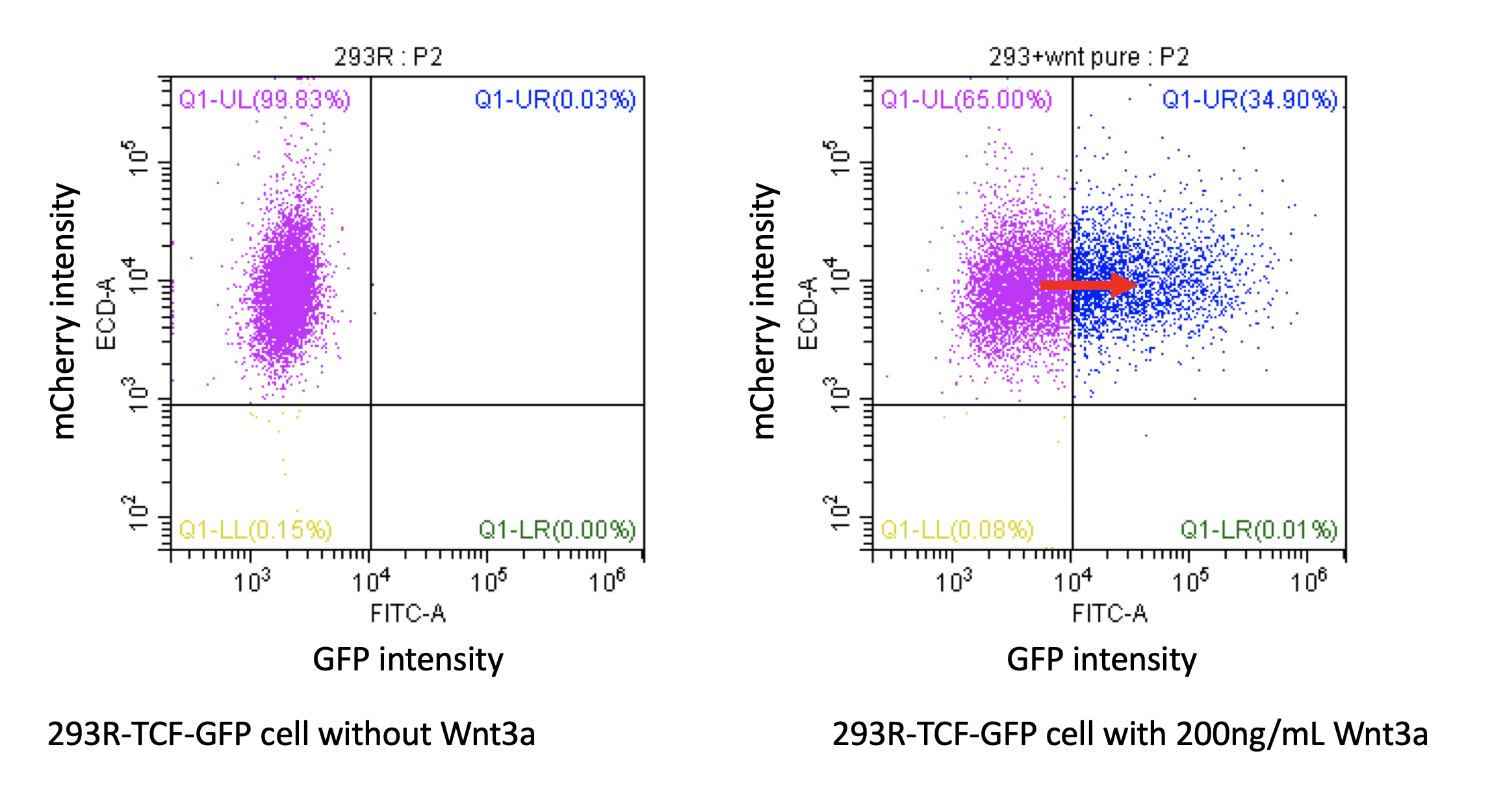 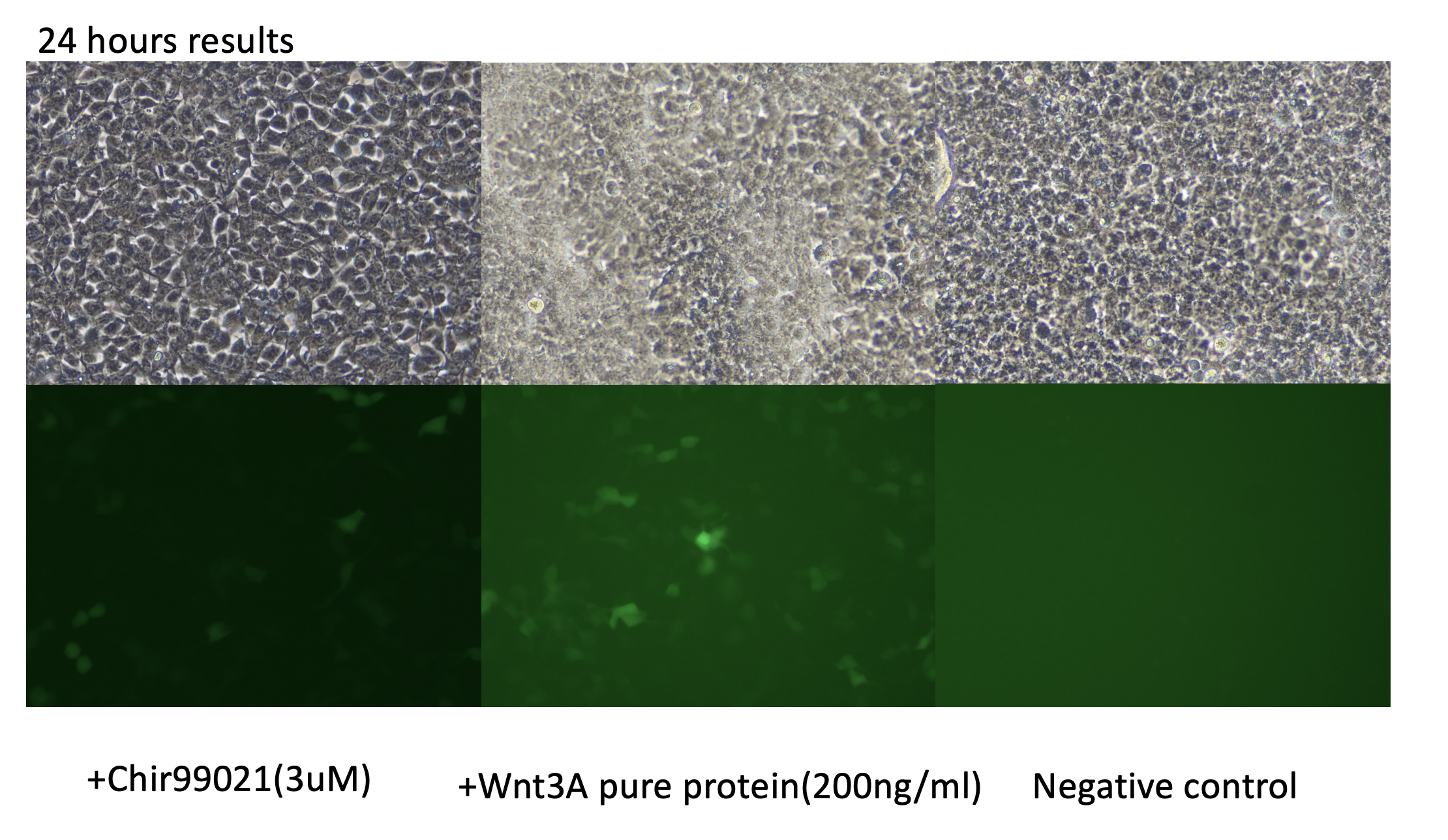 This TCF-TATA-GFP construct can be used to indicate the activation of WNT pathway, which largely related carcinogenesis. Therefore, it’s a powerful indicator in cancer pathway researches.(Akiri, et al, 2009) Besides this, it can indicate the extracellular Wnt3a protein, acting as perfect reporter system.

This method of transcriptional response element(TRE) coupled with a fluorescence gene gives a new window for biosensor in synthetic biology. Especially when the chassis organisms are eukaryotic cells. It may inspire more iGEMers to design project based on eukaryotic cells.

At the very beginning, we wanted to use the Cre-loxp system to switch on the giving signals of our donor cells. However, we found it’s not practical at all because the signal giving system is hard to be modified by generating some loxP sites and some other complex reasons. we then devoted ourselves to and improved the existing parts, BGH poly A mammalian terminator(BBa_K678019) and loxP site(BBa_J61046), generating a loxP-stop-loxP construct, which can act as a switch to control the transcription of downstream sequence.

The part called loxP-STOP-loxP(LSL) is a combination of the loxP site and the bGH poly A terminating signal. Generally, Cre-loxP system is a widely used system to generate deletions, translocations and inversions at specific sites of DNA. It consists of two directional 34bp loxP sequence. When these two loxP sites possess the same direction, the sequence between them will be excised by Cre recombinase(Fig1).

BGH poly A, as one of the mammalian terminators, mediates the polyadenylation of mRNA; we improved this part by adding two loxP site with the same direction both before and after it, which means the BGH poly A terminator can be deleted under Cre recombinase as a result.

In the field of molecular biology and cell biology, basic concepts of transcription termination in eukaryotes are widely applied to the technology of molecular cloning. For the DNA polymerase II, the transcription termination is always mediated by the process called polyadenylation, which is initiated by poly A signal in the 3’ downstream region of coding sequence. BGH poly A signal is a commonly used terminator in molecular cloning to build a normal expression construct initiated by Pol II.

Cre-loxP recombination system is a popularly used system to generate deletions, translocations and inversions at specific sites of DNA. This system is relatively simple compared to other mechanic switches, it only need two LoxP sites and one single Cre enzyme, and then, inversion or deletion happens. In details, it consists of two directional 34bp loxP sequence.When these two loxP sites possess the same direction, the sequence between them will be excised by Cre recombinase;

while if these two loxP sites possess opposite directions, the sequence between them will be inverted. This method is implemented both in eukaryotic and prokaryotic cells. Particularly, Cre-loxP system is used in transgenic mice as well as neurobiology, with a great potential usage in synthetic biology as a switch. 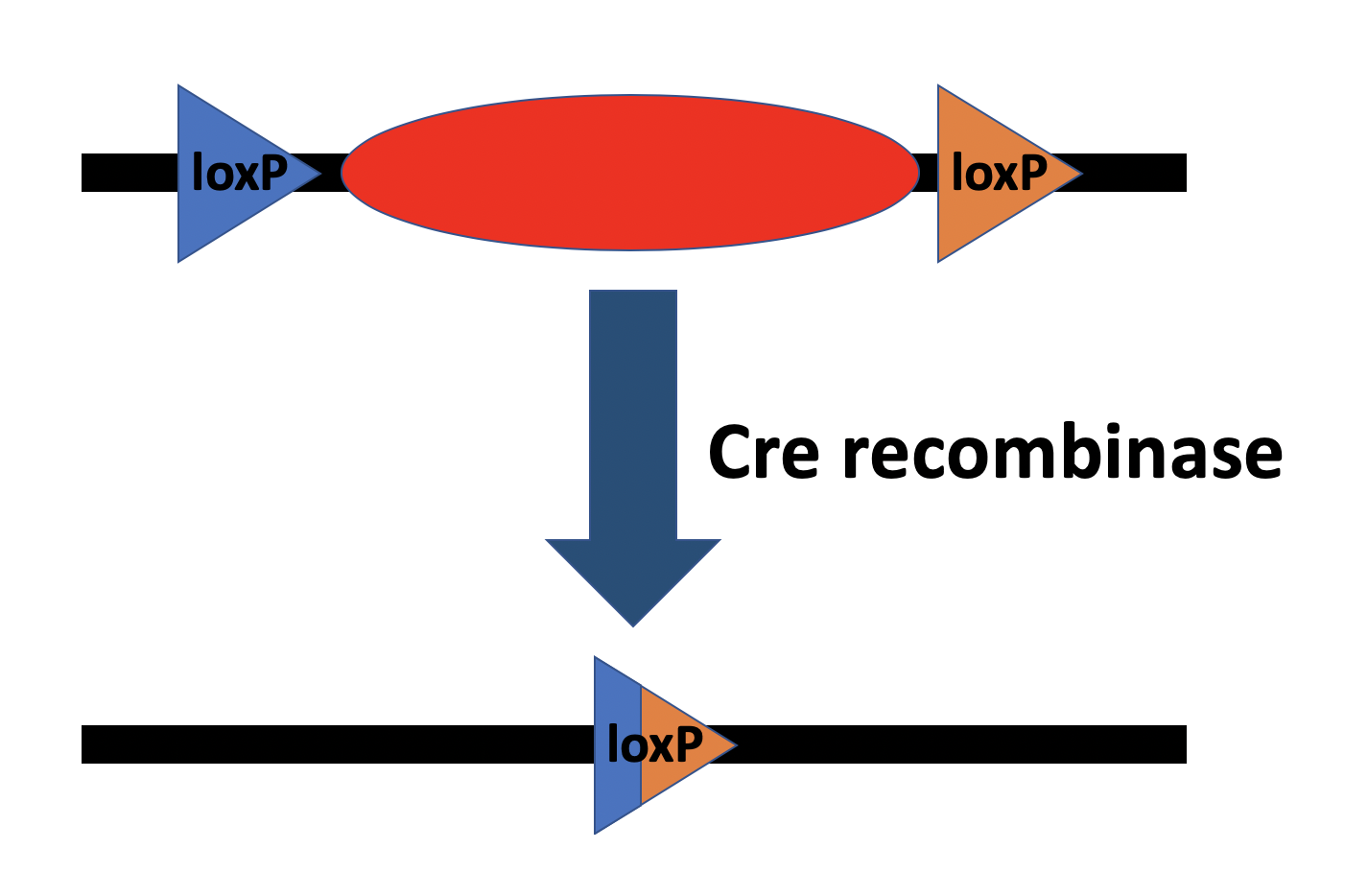 In the case that BGH polyA signal is flanked by two LoxP site, in which the construct is leaded by a promoter and followed by a functional gene.

Withoutthe Cre recombinase, transcription happens but terminates before coding sequence, producing a short piece of mRNA, which goes to abortion. (Fig2) On the contrast, when we introduce Cre recombinase, the recombination happens, and BGH polyA signal sequence is deleted as the result. This coding sequence can be effectively transcribed to a much longer mRNA and thus the functional protein can be expresses well. (Fig3)

Figure2. Shorter mRNA terminated by BGH polyA before coding sequence and the abortion of mRNA

LSL can be insert in front of any functional gene or some switches in synthetic biology. It can mediate time-specific or stage-specific expressions of some essential genes. For example, scientists have used this strategy to activate some oncogenes in specific stages. Also, for members in the iGEM community, when constructing a circuit, they can work with the global turn-on button, LSL, to make their contributions.

For Validated Part in Silver Medal, we added three parts (BBa_K2591010, BBa_K2591011, and BBa_K2591012), consisting of gRNA of genes together with scaffold, all of which were well characterized, validated, and used in our project.

Naturally, single guide RNA (sgRNA) is a small RNA which guide CRISRR-Cas protein family to target the exogenous sequence in prokaryotes, and assists them to defend phages. Nowadays, the artificial CRISPR-Cas9 system can achieve the modification casually in the gene level and is an excellent way to introduce mutation. The mechanism is shown in Fig1, the Cas9 nuclease is targeted to genomic DNA by a sgRNA consisting of a 20-nt guide sequence (blue) and a scaffold (red). The guide sequence pairs with the DNA target (blue bar on top strand), directly upstream of a require a 5’-NGG adjacent motif (PAM; pink). Cas9 mediates a double strand break in the upstream of the PAM (red triangle). (Ran, et al, Nat. Protoc., 2013) 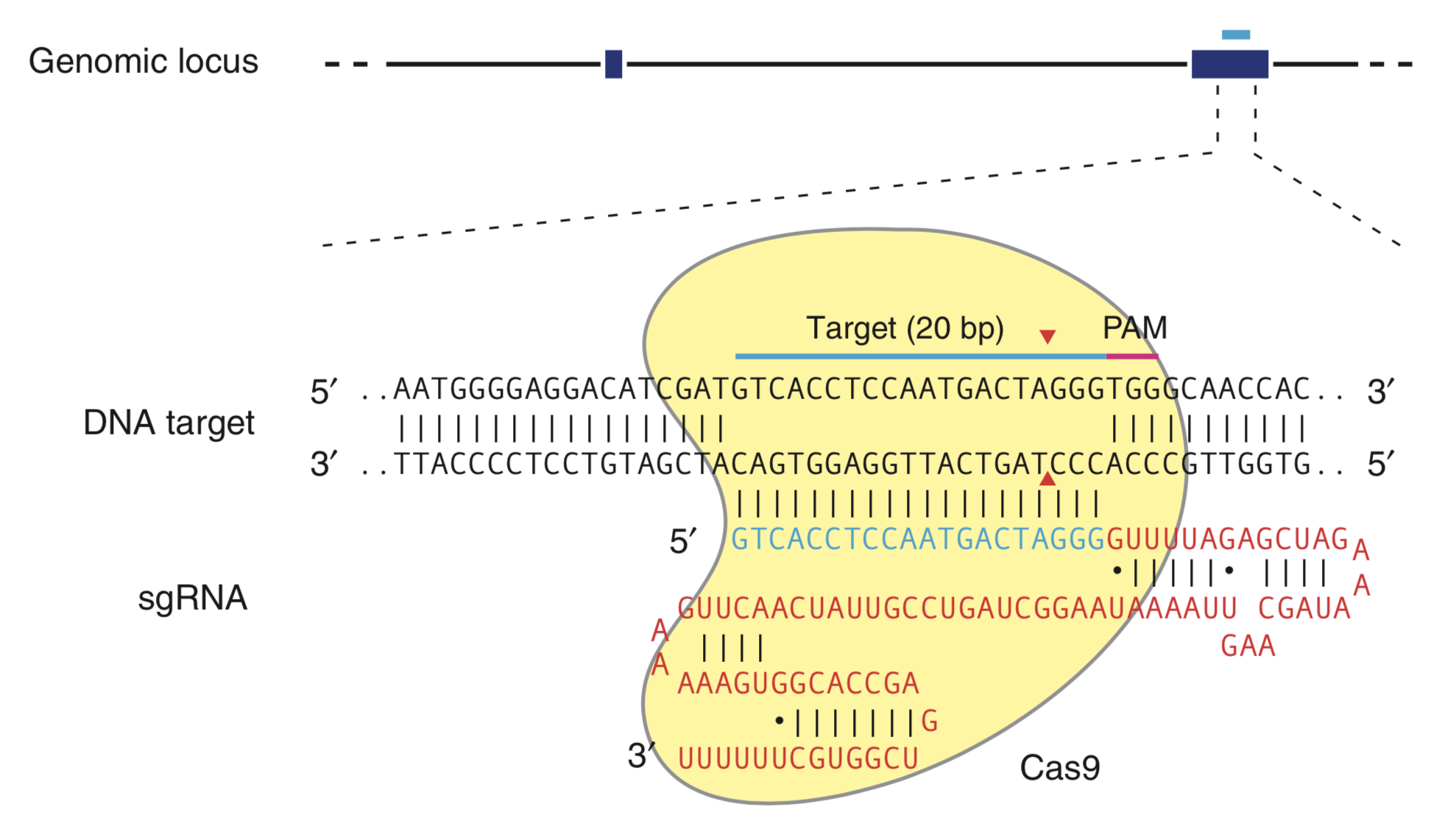 In our project, we design the gRNAs for PORCN, WLS, and Wnt3a. If we transfect their gRNA into cells, we can inhibit the donor cells from secreting the Wnt3A proteins normally. Knockout of PORCN and WLS can block the Wnt3a secretion through disturbing its maturation process, while knockout of Wnt3a blocks the process from the origin, which works as a positive control. And we have integrated each gRNA together with the scaffold into the backbone pSB1C3 to get a new part (BBa_K2591010, BBa_K2591011, and BBa_K2591012). (Fig2) 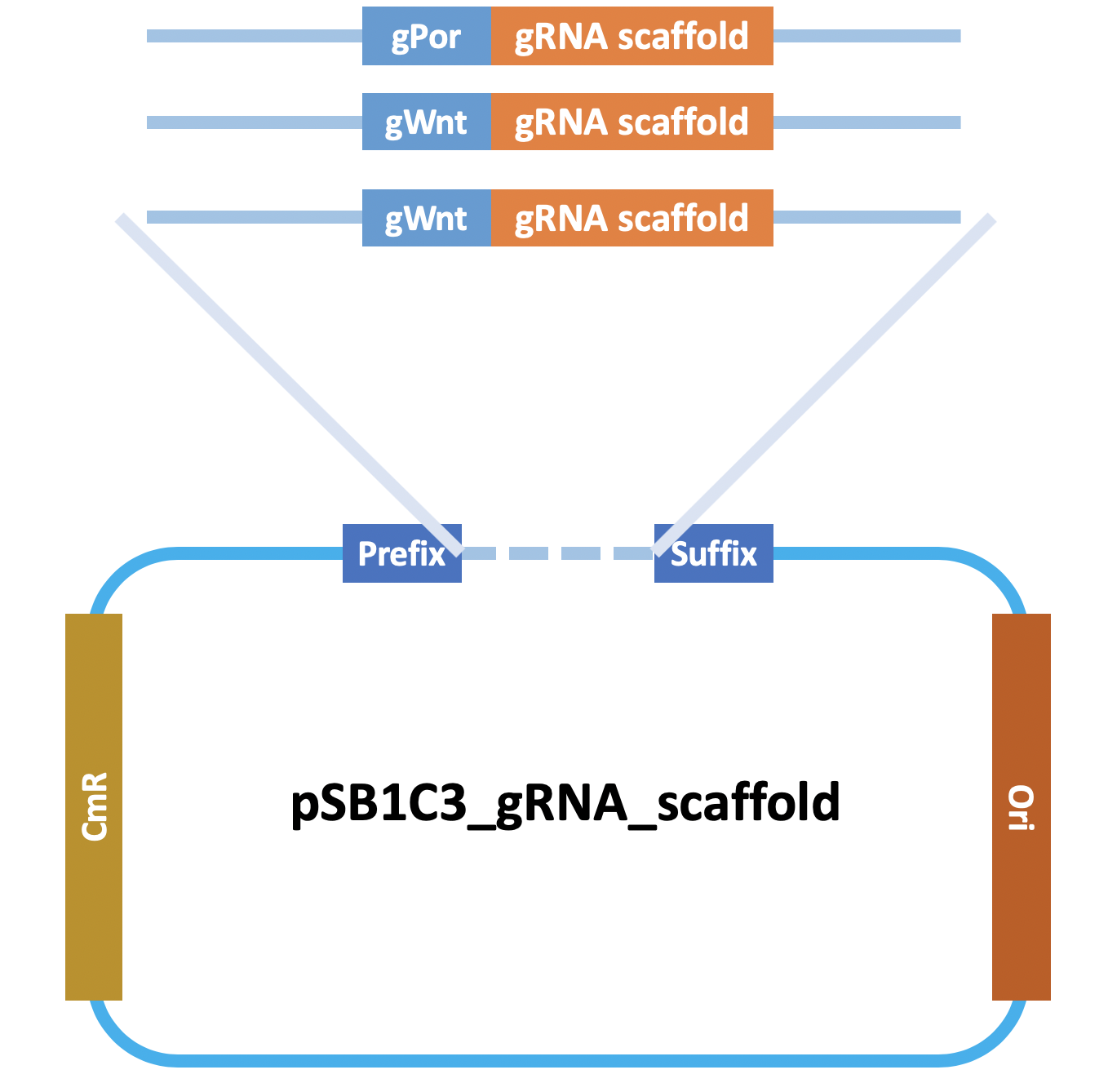 As mentioned above, knockout of these three genes will impair the Wnt3a secretion activity in the cells. Therefore, we first introduced sgRNA into the L-Wnt3A-Cas9-mCherry cell line, which continuously expresses Cas9 protein. After that, we coculture them with our Wnt3a reception cell, 293R-TCF-EGFP cell, then observed the fluorescence after one day to validate our part. As a result, we did not see green fluorescent protein at the green filed(475nm), which means the Wnt3A protein cannot be secreted from the L cell normally, resulting no reception in 293R-TCF-EGFP cell. And all of the gRNA designed for these genes could target specific sequence and did mutate it with Cas9 protein.

We also observed the validated results using FACS. Validation images are shown in Fig4 and Fig5. 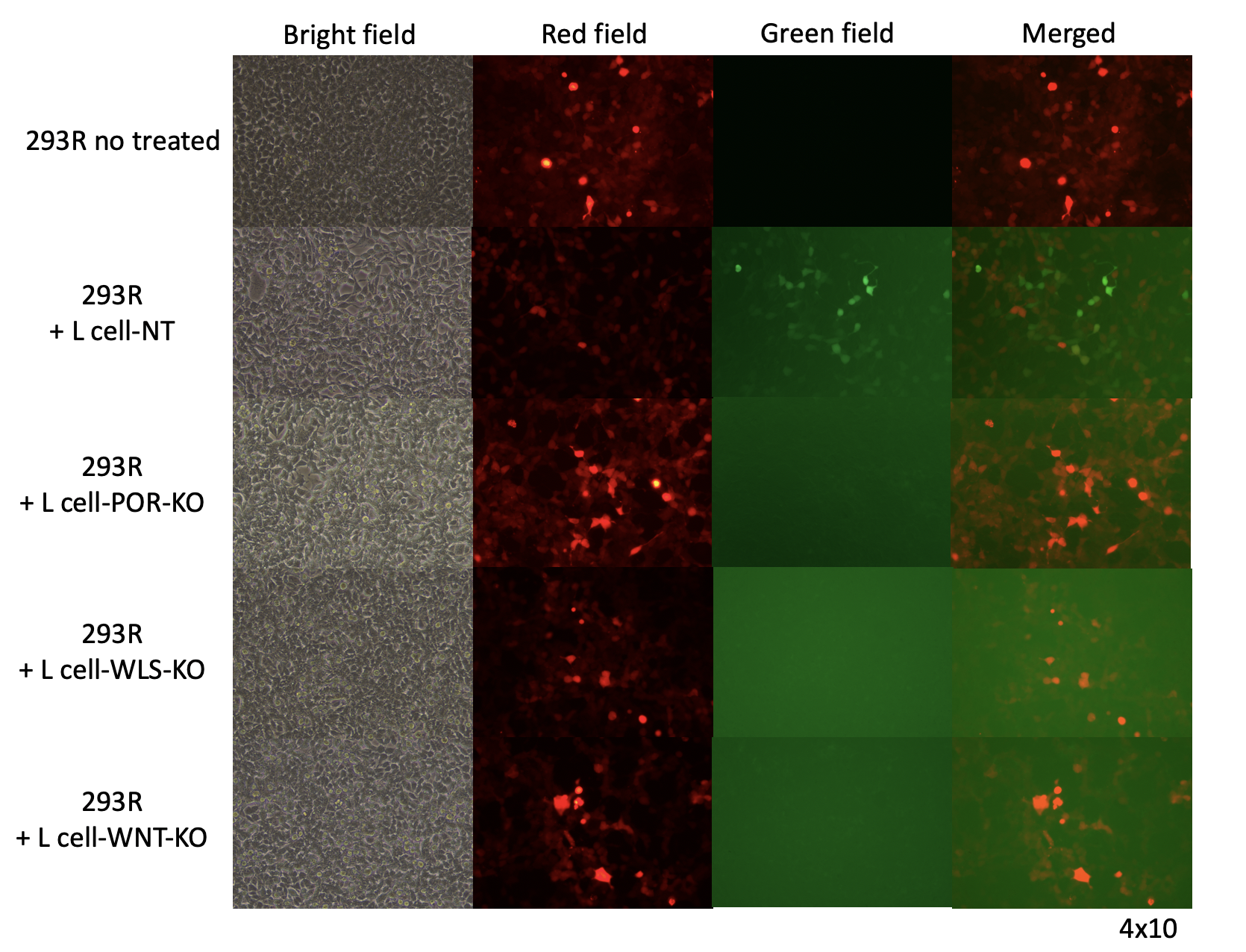 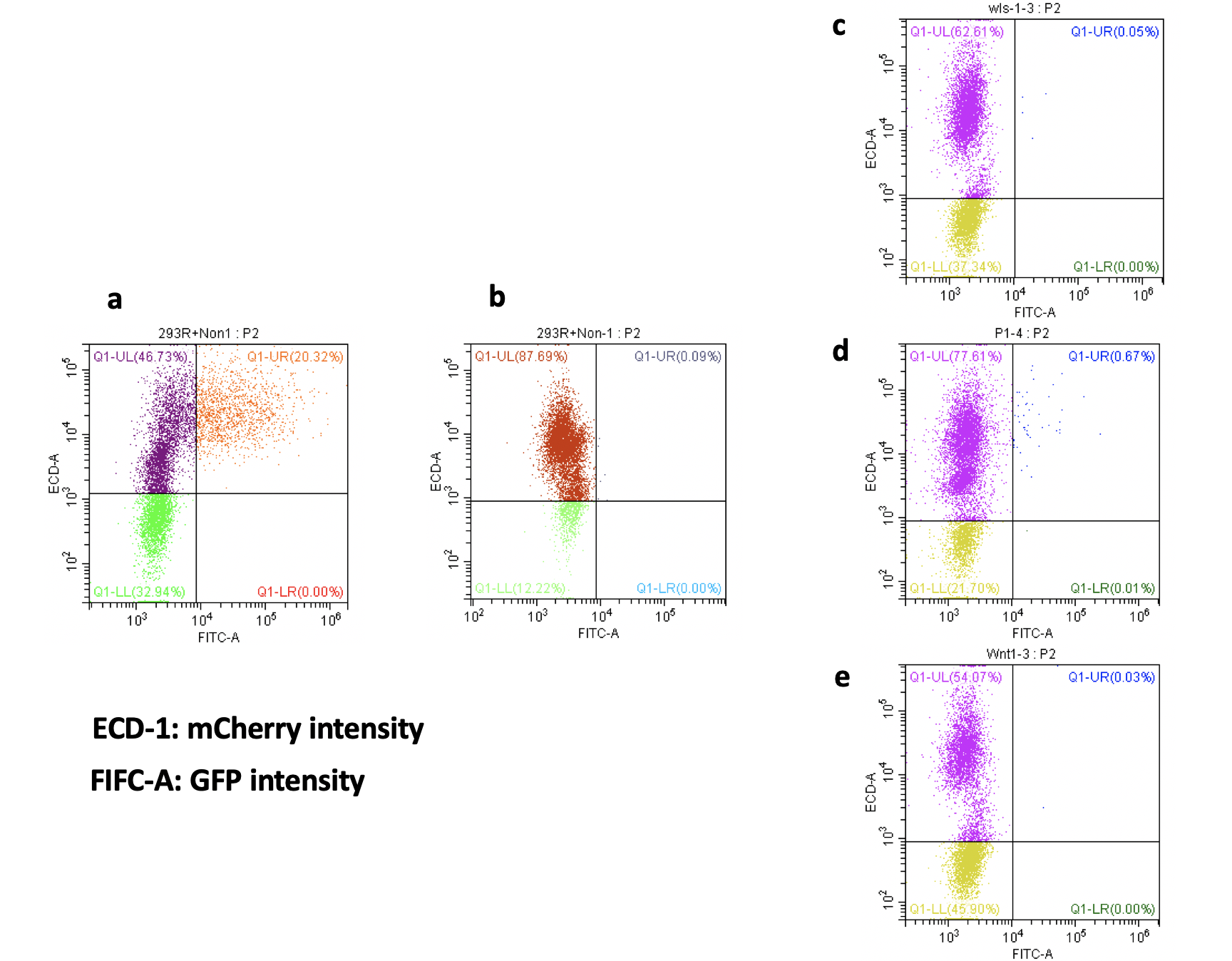 For this part, we have found a point error (G->A) in its sequence, which may potentially cause unexpected functional damage. Therefore, we intended to fix the point mutation by artificial mutagenesis. The total length of this biobrick, BBa_I714031, is 278bp, inside which located a point error in No.108bp.Thus, we decided to utilize PCR to generate mutations. The primers are:

For negative control, the 2×phanta Max Master Mix was replaced by H2O of the same volume. PCR program was 95°C for 30s, then went to 25 cycles, which included degradation at 95°C for 15s，annealing at 63°C for 15s, extension at 72°C for 2min, then followed by a 5-min 72°C completely extension. Then we run a gel to see whether PCR is successful, in which 15kb marker and 1% gel are used to run for 30min. The gel image of our results was shown in Fig1. 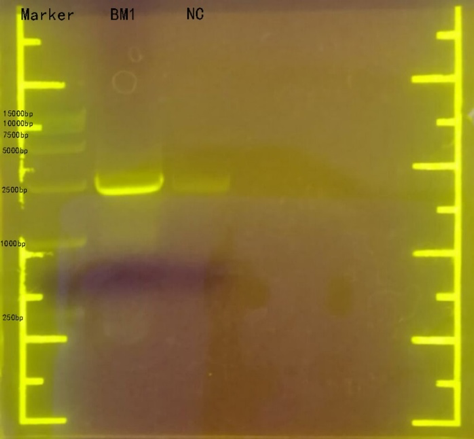 After that, extraction of DNA sample from gel was done. Then we used DpnI, which cuts the methylated GATC sequence, to digest the methylated origin templates and left the newly synthesized DNA. Finally, we directly transformed the digestion products into DH5α, due to the repair system of E.coli, the linearized plasmids was fixed to circular. Then we did the miniprep and sent to Sanger sequencing. The sequencing result shown we had successfully generated the point mutation in No.108bp, which means the single error was repaired. (Fig2)

For this part, we have found a point error(T->C), which may potentially cause some unexpected functional damages. Therefore, we intended to fix the point mutation by artificial mutagenesis. The total length of this biobrick, BBa_K1592002, is 366bp, inside which located a point error in No.189bp. So, we decided to utilize PCR to generate mutation. The primers are:

For negative control, the 2×phanta Max Master Mix was replaced by H2O of the same volume. The PCR program was set at 95°C for 30s, then went to 25 cycles, which included degradation at 95°C for 15s，annealing at 63°C for 15s, extension at 72°C for 2min, following with a 5-min 72°C completely extension. Then we run a gel to see whether the PCR is successful, in which 5kb marker and 1% gel are used to run for 30min. The gel image was shown in Fig1. 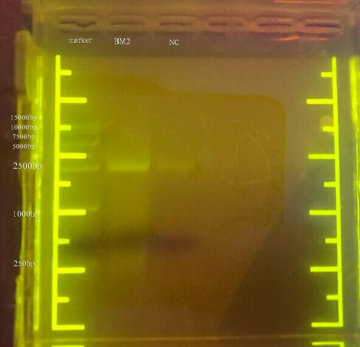 After that, extraction of DNA sample from gel was done. Then we used DpnI, which cut the methylated GATC sequence, to digest the methylated origin templates and left the newly synthesized DNA. Finally, we directly transformed the digestion product into DH5α, due to the repair system of E.coli, the linearized plasmids was fixed to circular. Then we did the miniprep and sent it to Sanger sequencing. The sequencing result showed that we had successfully generate the point mutation in No.189bp, which means the single error was repaired. (Fig2)