In the first stage, cells are input from channel 1 and 4, oil is input the chip through channel 2, they are both confluent at the chip junction. And the oil will cut the cell solution into droplets. Then, all the droplets will come out through channel 3. The first step generates lots of water-in-oil droplets. 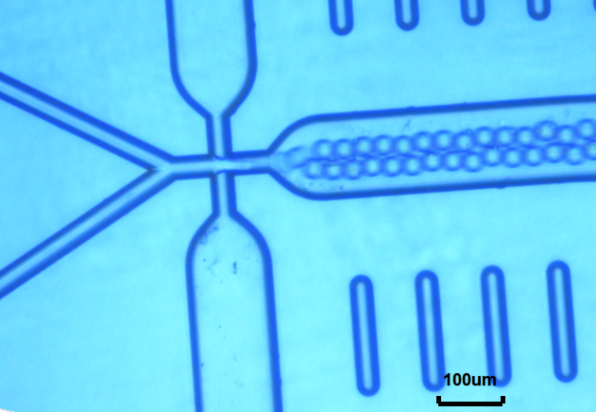 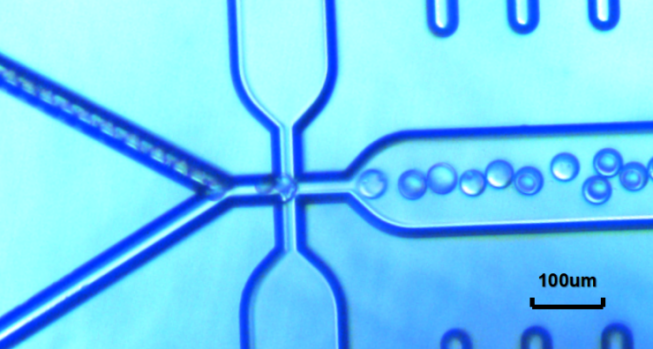 Figure 2 : The picture of real products of double emulsion system. The left is the first emulsion, the right is the second emulsion. 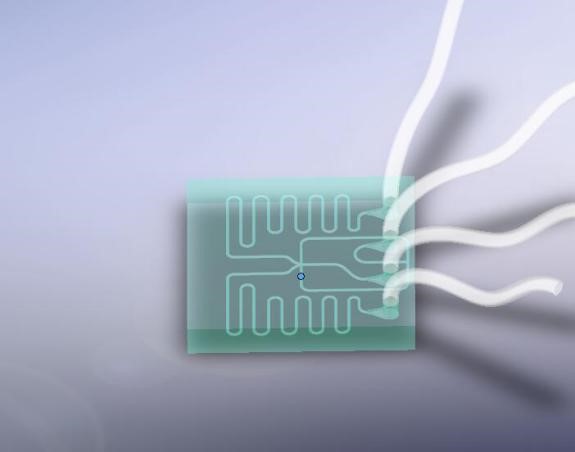 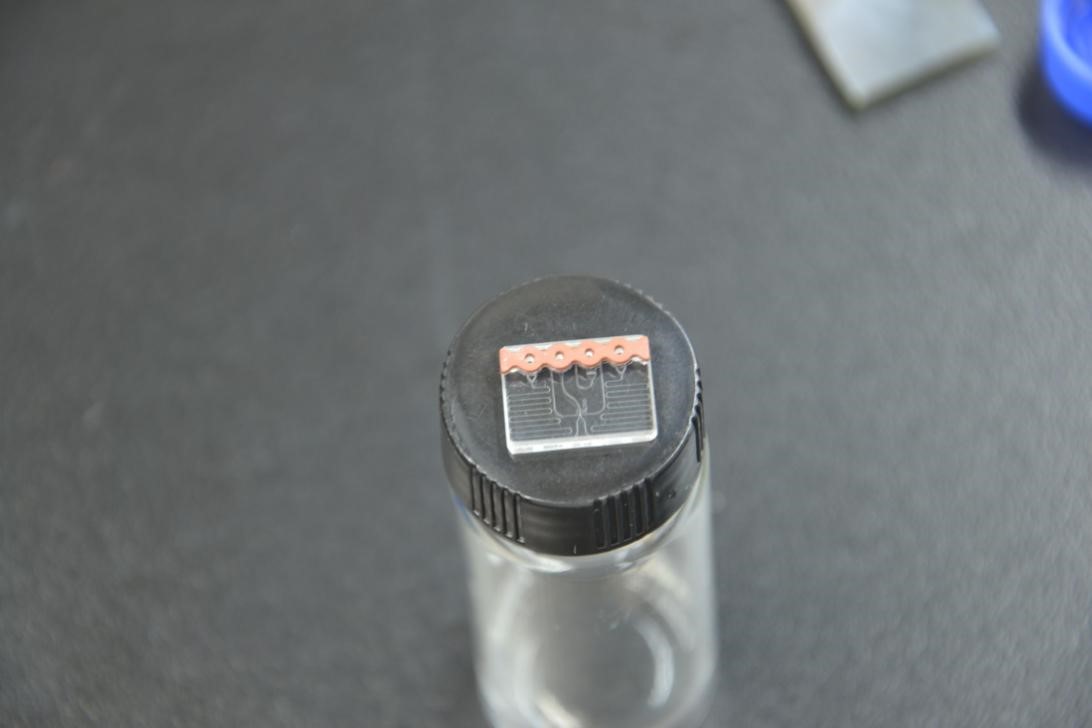 
Oil reagent we used is Novec HFE 7500 with 2% Pico-Surf, which has fluorine that can exchange oxygen and carbon dioxide. Exchange gas from the environment is essential for cell culture. In order to make oil better flowed in the chip, the first chip is flurophilic. This allows water-in-oil droplets to be created in fluorinated oil that support cells survival in droplets.


The second emulsion chip has a highly hydrophilic surface which is wet by water. This is very useful for the second encapsulation.


Our chips can not only use Novec HFT 7500 or TBST to produce droplets, the following table shows the chemical compatibility for chip surface coatings.


The microfluidic chip has three size: 15um, 30um and 50um. To avoid three cells are encapsulated in one droplets, the size of droplets are restricted around 30 microns uniformly distributed. Diameter of cells are between 10um - 15um. We can see the plotting scale in the following pictures. The 30 micron chip can only encapsulate two cells in a droplet.

③Microscope: capture images of microfluidic chip and connect to the computer.

④Computer: observe the emulsion process and adjust pressure and velocity in the Flow Control Software.

⑥Temperature control unit: adjust the temperature of the chips. 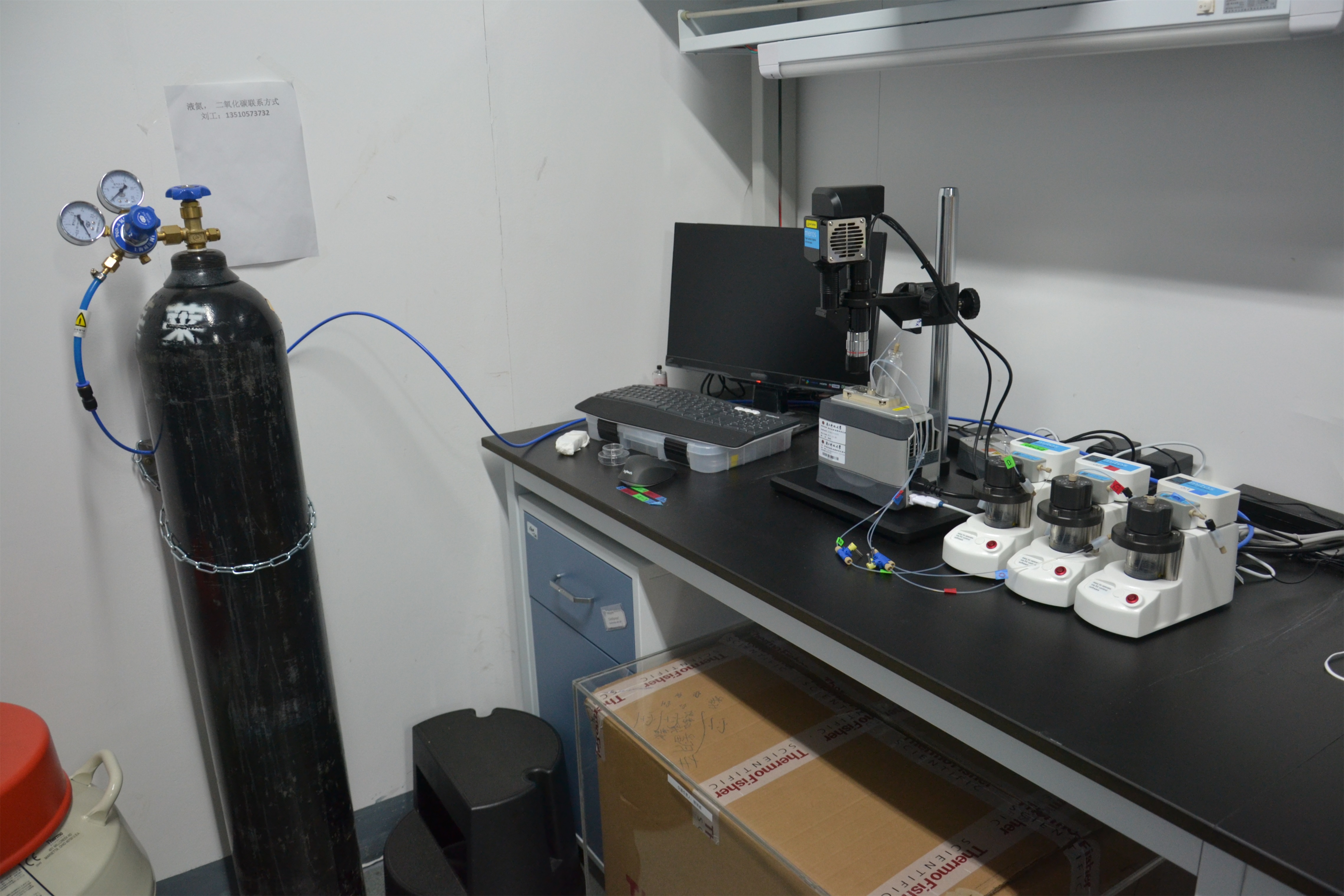 
Switch all the hardware on including gas cylinder, computer, pressure pumps, temperature control unit and microscope.


Open the FCC software, which can control the pressure of the pumps and temperature of the temperature control unit. The temperature should be set to 4 ℃ in initial to keep cell low viability during encapsulation 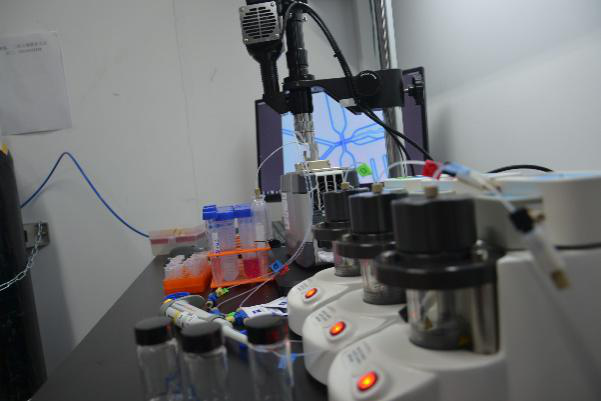 
Flush Novec HFT 7500 in the tubing. Tare the pressure and flow rate for calibration. Oil push stably push the cell sample into the microfluidic chip resulting in stable encapsulation.


Load the cell in a sample reservoir for buffering the pressure. The reservoir chip can load 100 uL cell suspension each cell. The concentration of cell suspensions are about 107 cells/mL as we mentioned before. 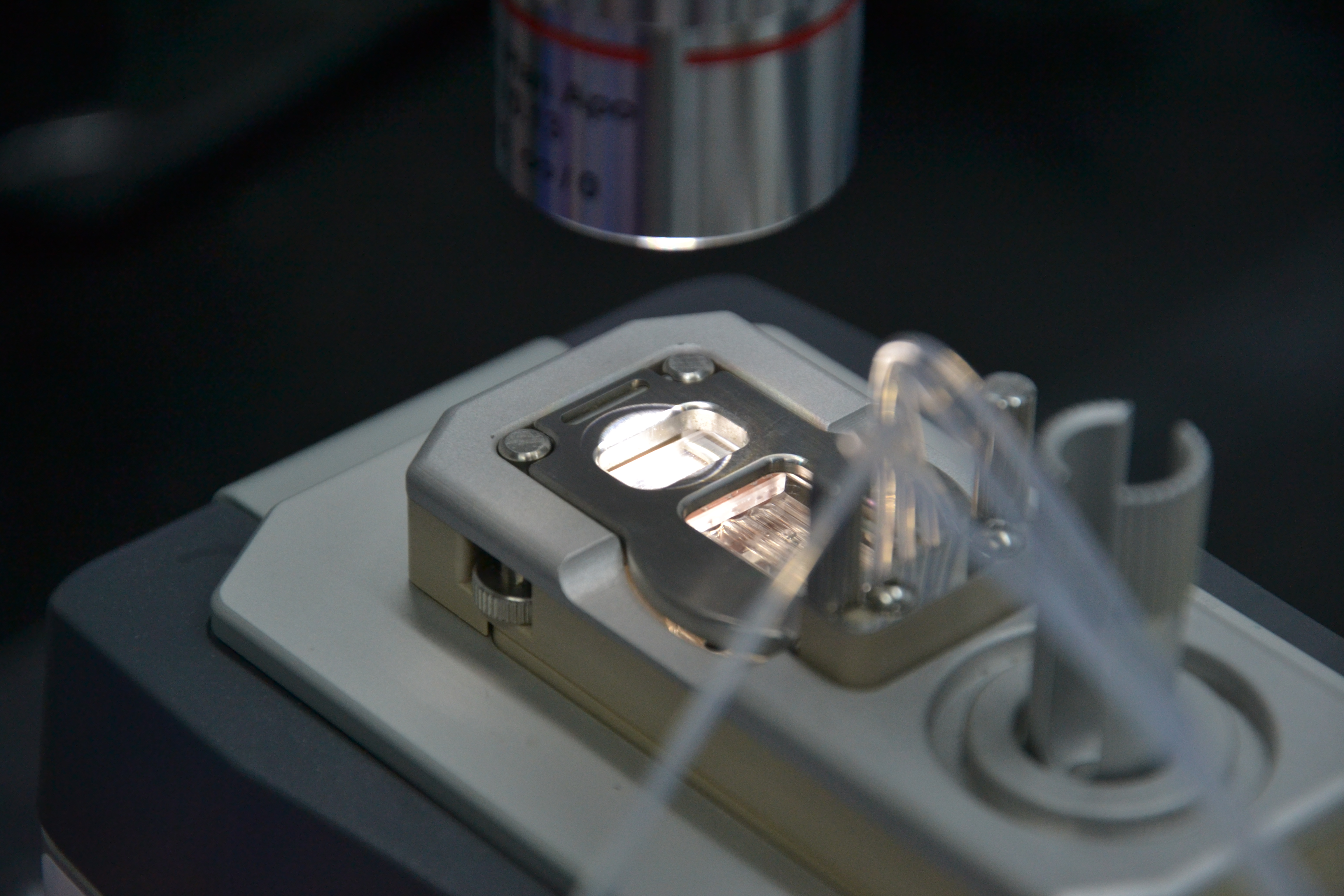 
Close all the valves before starting pumps. Adjust the microscope to the right place so that the chip can be observed in real time. Set the pressure of cell I channel to 2000mbar, cell II chancel to 2000mbar, oil to 1000 mbar in the software. Now, we can observe the droplets size on screen. Within 20minutes, about 5*106 droplets are generated in the device. Sometimes, the concentration of cell suspension are different, the viscosity are different. Thus the size may not the same for every time, we need some fine adjustment of pressure to keep the size at 30 um. After the fluid is stable, we can use a micro tube to collect our droplets from channel 3. After first emulsion, these droplets are ready to do the second emulsion later.

Video 1: The first stage of emulson.


Remove all liquids from the pumps and run them at up to 4 bar to empty the tubes from any remaining liquid. Rinse both sample reservoirs in the sample reservoir chip with 100uL of SDS(Sodium Dodecyl Sulfate), water and Isopropanol successively. Run the system with SDS, water and Isopropanol to clean the chip. Each reagent runs for 2-3 minutes will be fine. After finishing, all chips should be stored in a clean zip lock bag. 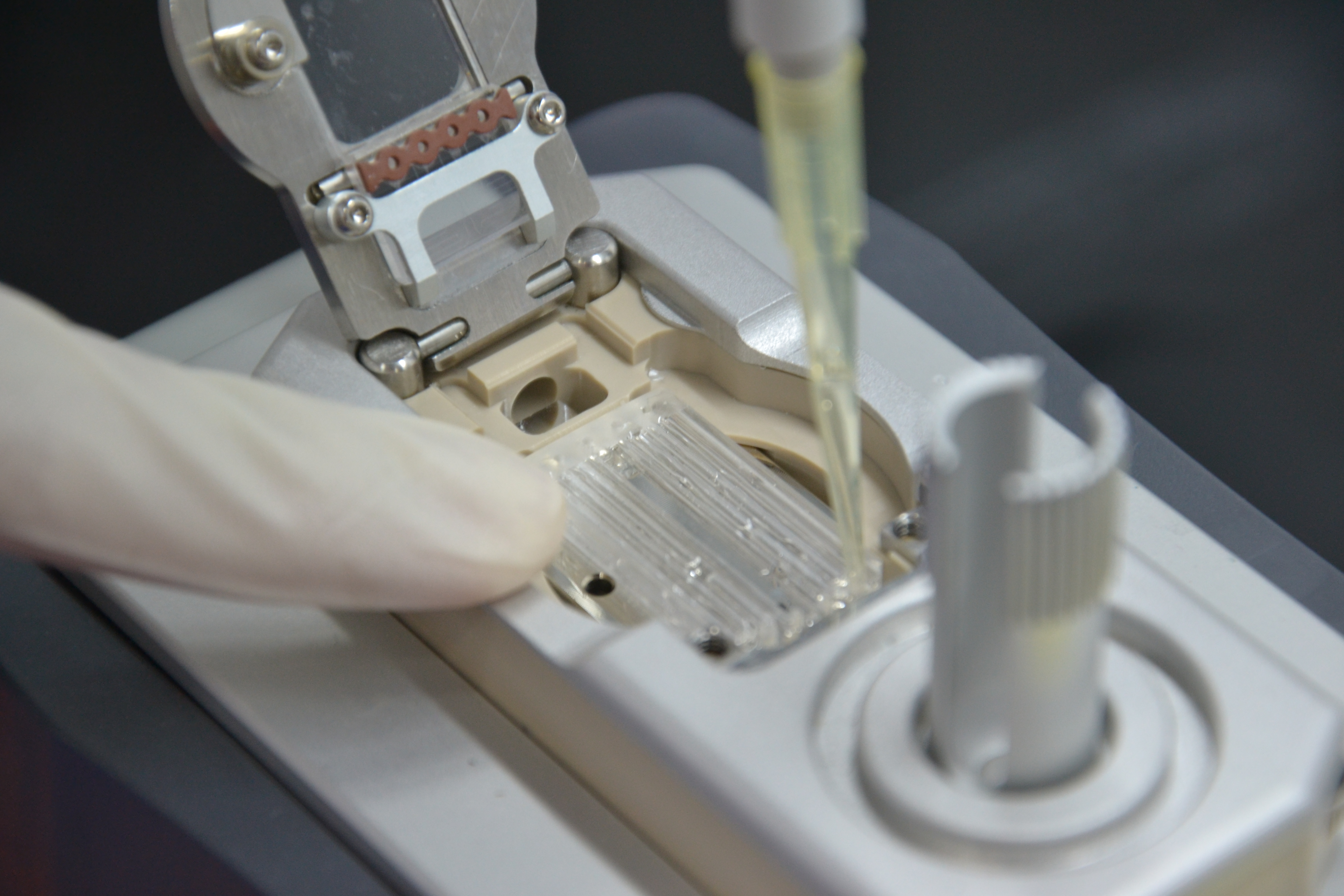 
The basic operation of second emulsion is the same as the first emulsion. Only the reagents and parameters are changed. In second emulsion, we use TBST to push the liquids, so all the tube are filled with TBST. Droplets from the first stage are loaded in channel 1 of reservoir chip. In channel 2, we load oil with surfactant to separate droplets. Otherwise, two droplets may be encapsulated together.


To protect the droplets from breaking, we use very small pressure. For droplets, 100mbar is enough. And 200mbar for both oil and TBST. It is estimated about 70 thousand droplets are produced in one hour. Also, the temperature need to turn back to 25 ℃. Because it has a great influence on viscosity of oil. Also, the cells are already encapsulated, it is unnecessary to keep a low temperature.

Video 2: The second stage of emulsion.


In biological experiment, we built two kinds of cells. One can release Wnt, as a signal while the other can receive this signal and emit green fluorescence. But if we knockout the key genes in Wnt-secreting cell, it cannot produce Wnt. So we can observe no fluorescence signal from reporter cell. What double emulsion system does is encapsulating cells pair-to-pair. And then we can use FACS to detect the fluorescence signal.


Here, we use Poison distribution to model encapsulation efficiency of two-cell droplets and the encapsulation rate of droplets. More details please find here.


1. High-throughput: it can produce few million droplets in one experiment. Even through the efficiency is pretty low, we can have ten thousand droplets at least. Comparing to the traditional way, it is an astronomical number.


2. Promising: it can be applied in many other experiments.


1.The biggest problem we face is the block problem. The chip is always block by some small fibers or dusts. It is a crushing blow for our chips. So we filter every solution before we use it. It did work, the chip is block much less. But sometimes it is still block by some gelatinous substance. We tried many methods to avoid the blocks, but we failed. Finally we find that SDS can have reaction with cell solution and become gelatinous. So before we clean the chip, we always use the water to wash at first to avoid the block.


Double emulsion system can further explore cell-cell interaction and cell communications. In principle, all the cell signaling in cellular level can be achieved in our system. But as descripted in the upper part, the coculture time and environmental conditions are the biggest variables for cell culture with a droplet.


We here are building a microfluidic platform in biological applications. Future, more biological field may be applied on our high-throughput system such as immunological recognition, drug screening, artificial cell, high-throughput biomaterial synthesis. Our system can be modified and applied on single cell sequencing.